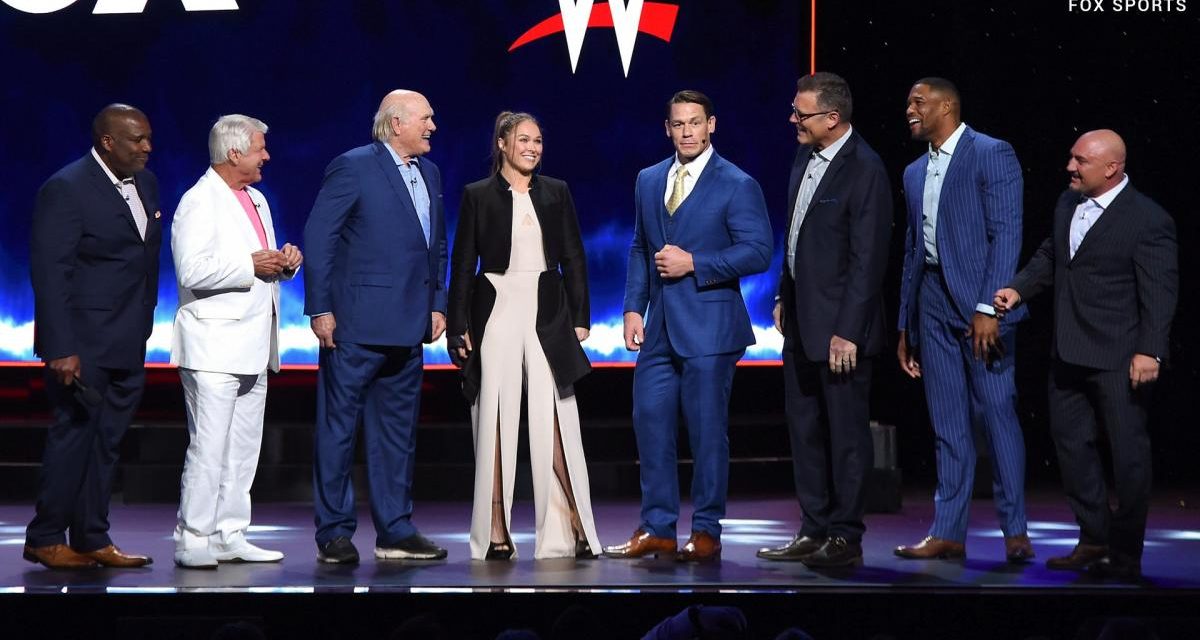 Just in time for the network upfronts, the WWE PR machine, boosted by a passive mainstream media too disinterested to do any real investigation, WWE has a new marketing pitch to make to all potential sponsors: WWE is sports, but better.

In a Deadline article that was published last week, Chief Branding Officer Stephanie McMahon argued on behalf of WWE saying that the company was now viewing itself as sports programming, an opinion that was shared by the company’s network partners, NBCU and FOX. WWE is not just sports though; they are a superior version of sports, with the argument being that WWE can control the outcomes, making sure every match comes down to the wire.

“It’s like athletic theater. It’s the story, that’s why you care …. You’re swept up in the storylines. We can script the buzzer-beater moments, we can script the Hail Marys. We have a leg up on sports. … You may object to what we do, but you’re never going to be bored,” McMahon told Deadline.

The logic that Stephanie is using is simple; since WWE, which as a pro wrestling company is naturally producing a form of faux-athletic competition, is scripted, the company can ensure every match is interesting. Unlike in real sports, WWE can make sure there are no blowouts, no mismatched opponents, no uninteresting games; because WWE isn’t real; they are in full control of anything and everything that happens.

This is the same logic that has been used by wrestling promoters for centuries. Wrestling evolved into being a work because promoters in the 1800s realized that patrons would be satisfied if they saw particularly exciting bouts; even if they lost money gambling on the “shoot” fights. Slowly the business shifted from one based on gambling, to one based on entertainment with the newfound workers putting together artificially entertaining sporting contests.

However, if one peels back the onion a bit and examines the argument that Stephanie is making philosophically, it highlights the real absurdity of arguing that pro wrestling should be considered a sports event.

While Stephanie argues that WWE having control over the outcome of its product makes it superior to “regular” sports like football, baseball or basketball; what it really does is showcase a fundamental lack of understanding in what makes real sports appealing.

Sporting events, particular major events like playoffs and the Super Bowl, are interesting to neutral fans because they contain random, uncontrolled elements. The recent NBA playoff game between the Milwaukee Bucks and Boston Celtics, which drew nearly 8 million viewers on May 15, the highest viewership total for an Eastern Conference Semifinal game in a decade, is a perfect recent example.

The reason that game was so successful was because fans did not know what was going to happen during the game or who was going to win. The teams had played a series of narrowly-contested games leading up the penultimate seventh game; and fans tuning in were intrigued by the mystery of what would happen.

In wrestling, the mystery is far less intriguing. The results of WWE matches are determined by the whims of one man, someone who has been making these decisions for 40 years. Seasoned fans can easily guess the result of most WWE matches, particularly because Vince McMahon has a dramatically narrow view of what constitutes quality professional wrestling. While Stephanie may argue that wrestling being scripted gives it limitless levels of potential appeal; levels that “real” sports can only dream of, the reality is that the WWE product is often tired, predictable and boring.

The argument that the company can produce its own buzzer-beater moments, which lead to increased fan interest, doesn’t hold up to much scrutiny. Interest in Monday Night RAW typically peaks during the early periods of the show and crashes in the third and final hour. Despite the promise of exciting, scripted conclusions, WWE’s product tends to drive viewers away from the product the longer it is on. This is different from most pro sports, which tend to progressively grow viewership as the game progresses and peaks during the final moments.

The Bucks vs Celtics game which did the strong viewership ended up not being particularly close; the Celtics ran away with the game in the second half and won by 28 points. No buzzer-beaters were necessary to draw the high viewership; merely intrigue that was created through the practice of natural, uncontrollable and unpredictable competition between two talented teams. Funny how that works.

WWE’s push to legitimize itself as a sports entity is very transparent. For years the television industry viewed primetime entertainment as the most lucrative endeavor, with the entertainment shows driving ad revenue. At one point, ESPN attempted to brand Monday Night Football as entertainment as opposed to sports in an attempt to crack into the higher advertising brackets.

Over time, as the interest in entertainment primetime programming dwindled due to competition from streaming services producing oodles of scripted content; sports has risen as the great savior of linear television, and now is the time for WWE to fully embrace the sports label with open arms. Sports are now the focus of major ad agencies, who have more dollars to spend on live sports programming. WWE smells money by being branded as sports, as do NBCU and FOX, who are paying billions to present them just as that.

The attempt may not work. ESPN was never able to convince ad agencies that Monday Night Football was entertainment, and in today’s upside-down environment, they are lucky they never really succeeded. WWE, which was prominently featured at both NBCU and FOX’s upfronts this week, will try to convince advertisers that they too, are real sports; actually superior to real sports if you listen to their CBO.

What may be WWE’s downfall is that the appeal of live sports to advertisers is largely centered on the fact that live sports are virtually DVR proof. Obviously, that is of paramount interest to advertisers, who want viewers to be forced to sit through the commercials as opposed to skipping through them while watching on a delay.

According to Dave Meltzer on Wrestling Observer Radio, approximately 96%-99% of live sports viewership is watched live and not on DVR. For WWE, that number is around 70%. Until WWE can successfully claim that viewers are watching live at the same rate as major professional sports; the company and its network partners are unlikely to be able to sell ad agencies on the concept that WWE is just as much of a sport as the NFL or the NBA.

As a final bit of humor, at the same time that Stephanie McMahon is front and center arguing that WWE is like sports and NBCU and FOX are promoting WWE as sports at their respective upfronts, WWE’s lawyers in a legal battle with MLW is arguing that WWE and pro wrestling is in fact, not a sport at all.

“Professional wrestling is a scripted drama, not a sport. It has as much in common with an actual sport as the Rocky films have with actual boxing,” WWE’s legal team argued in its case, according to legal documents obtained by Wrestlenomics host Brandon Thurston.

Like almost anytime the company makes an attempt to represent itself strongly in the public sphere; the statements made by WWE can be clearly viewed as a sham; a con pulled by a company that has spent decades blundering around trying to gain acceptance in the modern corporate world. This time the con is aimed at advertisers who are looking to splurge on advertising during live sports; and WWE’s masquerade is shallow and poorly conceived.

On the latest episode of the Gentlemen’s Wrestling Podcast, Jesse Collings (@JesseCollings) and Jason Ounpraseuth (@JasonOun95) talk about a massive upcoming summer in pro wrestling. They start by talking about AEW’s Double or Nothing and the AEW/NJPW super show Forbidden Door. Then they preview NJPW’s BOSJ tournament before jumping over to WWE running multiple stadium shows this summer. They wrap up by speculating on ALL OUT’s location, as well as the touring schedules of both AEW and WWE.