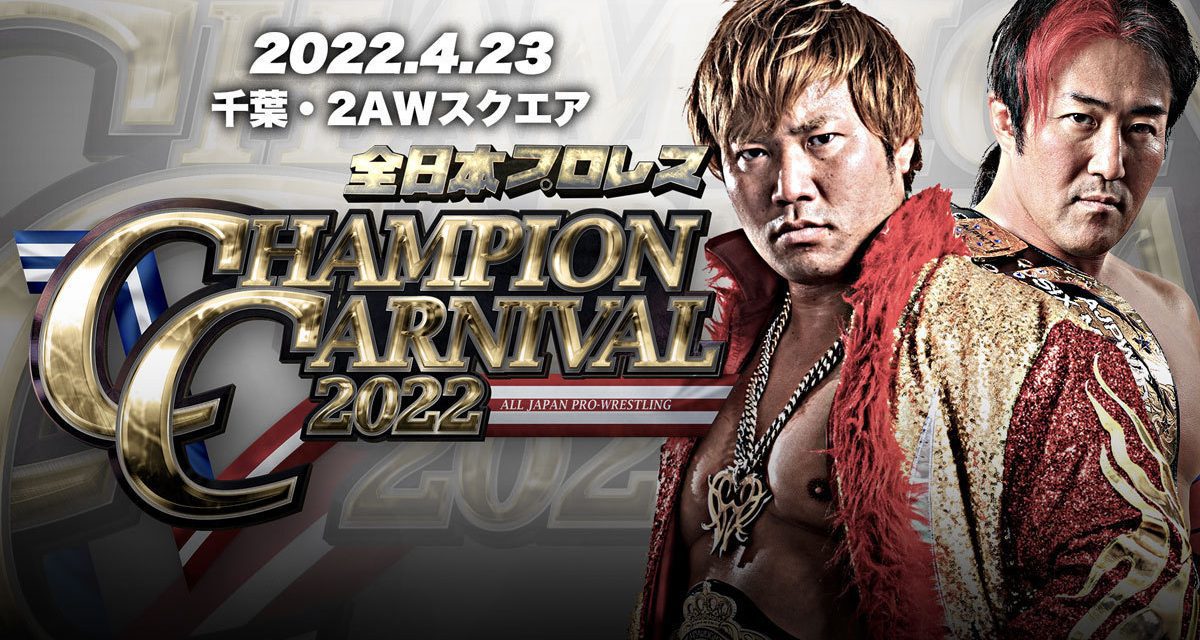 Aoyagi tried to go toe-to-toe with Arashi in the power department at the beginning, but got overwhelmed. Arashi worked Aoyagi over for a while,then Aoyagi made his comeback. A lot of this match was just kind of there and paint-by-numbers but the work wasn’t bad. Things did pick up in the last couple of minutes with Arashi trying to hit a Dominator, but Aoyagi kept escaping. Aoyagi managed to land a Crucifix Hold for the flash pin. This was kind of disappointing based on the work both guys had done in the Champion Carnival thus far. ***

Honda attacked before the bell, continuing the tension between the two Total Eclipse members. Honda wrestled as the heel here, with lots of cheap shots like eye rakes. Lee hit some thunderous sounding kicks and worked over Honda’s left arm. Honda looked to be in control and went for the Final Event, but Lee escaped and locked in an arm bar that got a referee stoppage. This was a fun little match and both men looked good. While Lee’s laughing schtick is a bit much, I think he has slowly felt more comfortable in his role over the course of this tournament. Honda and Lee fist bumped after the match, suggesting that all in Total Eclipse was well, for now… ***¼

This started with some great chain wrestling and reversals. They kept up a quick pace in the opening minutes. This settled down when T-Hawk went to work on Irie’s right arm in order to neutralize the Beast Bomber. A little later on, they traded stiff forearms and chops. Around the halfway point of the match, I realized they were probably going to a draw as they were still trading holds and doing some limb work. In a round-robin tournament like this, when you’re still doing stuff like that 15 minutes in, you’re usually going to a draw.

In the closing minutes, they traded closed-fist punches and headbutts and tried to cradle each other. There was a sense of urgency in all of this which is what you need to do to sell the importance of the match. I thought this was pretty good. They worked hard and even when they slowed it down at points to work holds, it all made sense. These guys are also talented enough to do some cool reversals along the way. Definitely one of the stronger matches of the Champion Carnival ***¾

This was like a compressed version of a Miyahara match. They went to brawl on the outside almost immediately. Back in the ring, Yoshitatsu worked over Miyahara for a while. Miyahara made a brief comeback, but Yoshitatsu took control again. If this sounds cliché, well it was, but Yoshitatsu worked hard and these two have always had good chemistry. Miyahara did some reversals, hit a couple of Blackout Knees and then pinned Yoshitatsu with the Shutdown German Suplex. I supposed some may dock marks for just how formulaic this all was, but I enjoyed the solid wrestling. ***½

This was supposed to be Sato vs. Hiroshi Yamato, but Yamato was pulled from the show because he was in close contact with someone who tested positive for COVID-19.

It’s not every day that Menso~re engages in strike battles but he surprisingly held his own here early on with a lot more chops than you usually see him use. The opening minutes were a good setup to the match, but the middle portion lost steam in my opinion. Things did pick up when Menso~re made a bit of a comeback which led to a headbutt battle and some crazy-sounding slaps. Menso~re kicked out of a Backdrop and a Death Valley Driver, so Sato just grabbed him by the head and landed another sick-looking headbutt. Sato then collapsed on top of Menso~re for the pin. Cool finish. This definitely picked up in the closing stretch. It was also cool to see Menso~re work a very different type of match for him. He deserves credit for stepping on short notice. This was Sato’s V2 defense of his third reign with the title, and for the first time, it looks like he’s going to have a reign that actually lasts a while.

Honda, as is his style in this tournament, attacked before the bell. They brawled mostly early on, including at ringside. The story here was simple, Honda tried to go toe-to-toe against the larger and much more experienced opponent, and he managed to hold his own a lot of the match including landing a couple of big Lariats on Ishikawa. Honda managed to kick out of some big moves but fell to Ishikawa’s Fire Thunder Driver. The brawling at the beginning was fine but unfocused, however, once they started using bigger moves, this really picked up.

I am somewhat surprised Honda finished the tournament with zero points, given how they have been pushing him in recent months. But often in All Japan, being in your first Champion Carnival is an accomplishment of its own. ***¼

Ashino went after the left leg from the beginning. Poor Irie has been having all of his limbs picked apart in this tournament. After his leg got worked over for a long time, Irie finally made a comeback. Irie found some cool ways to get out of predicaments and there were some fun reversals from both guys. Irie tried to finish Ashino with the Sleeper but Ashino kept trying to escape and finally did so. Ashino then got Irie in the Ankle Lock and Irie nearly escaped several times, but Ashino eventually got the grapevine on and Irie submitted.

This was good but I didn’t think it lived up to what these guys have done in other matches in this tournament. The leg work early on went on too long and in the final minutes, Irie didn’t throw the big bombs you usually see from him in a closing stretch. ***¼

This one was for all the marbles in A Block. The winner goes on to the finals. T-Hawk was in control in the opening minutes, targeting Lee’s neck. Lee got in control and did a bunch of heelish stuff but T-Hawk fought back with a closed-fist punch that Lee sold like he had been knocked out. T-Hawk got some near falls but Lee then made a comeback. I thought things were really picking up in a strong direction but Lee hit a few moves then the D4C for the win. While I have defended some of Lee’s character work in the tournament at times, it’s inconsistent and I thought he wasn’t a convincing heel.

This could have been really good given a few more minutes of big moves. Again, far from a bad match, but disappointing given what could have been. Lee now advances to the Champion Carnival finals. ***½

These past two shows, like the tournament itself, were solid. Nothing high level, but nothing bad either. But given we are into the final shows of the tournament, I had higher expectations.

The scenario going into the final B Block show on April 29 is straightforward. Takuya Nomura is technically alive, but it would involve a convoluted scenario where there is a double countout and that’s not going to happen. The main event of that show is Kento Miyahara vs. Yuma Aoyagi. Aoyagi got a surprise roll-up pin on Miyahara on the undercard of the April 24 show in a tag match adding some juice to that match. If Aoyagi wins, he goes through. If Miyahara wins and Suwama loses to Yoshitatsu, Miyahara advances. If Miyahara wins and Suwama wins, they will have to have a playoff match. I still think the most likely scenario is Yoshitatsu upsets Suwama and Aoyagi and Miyahara have a draw that allows Aoyagi to go through, and this is part of a build-up to an Aoyagi vs. Miyahara Triple Crown match later in the year, possibly at the 50th-anniversary show at Nippon Budokan.

An Aoyagi vs. Lee is the best choice for a final not just match quality-wise, but as part of highlighting younger talent that isn’t Miyahara.