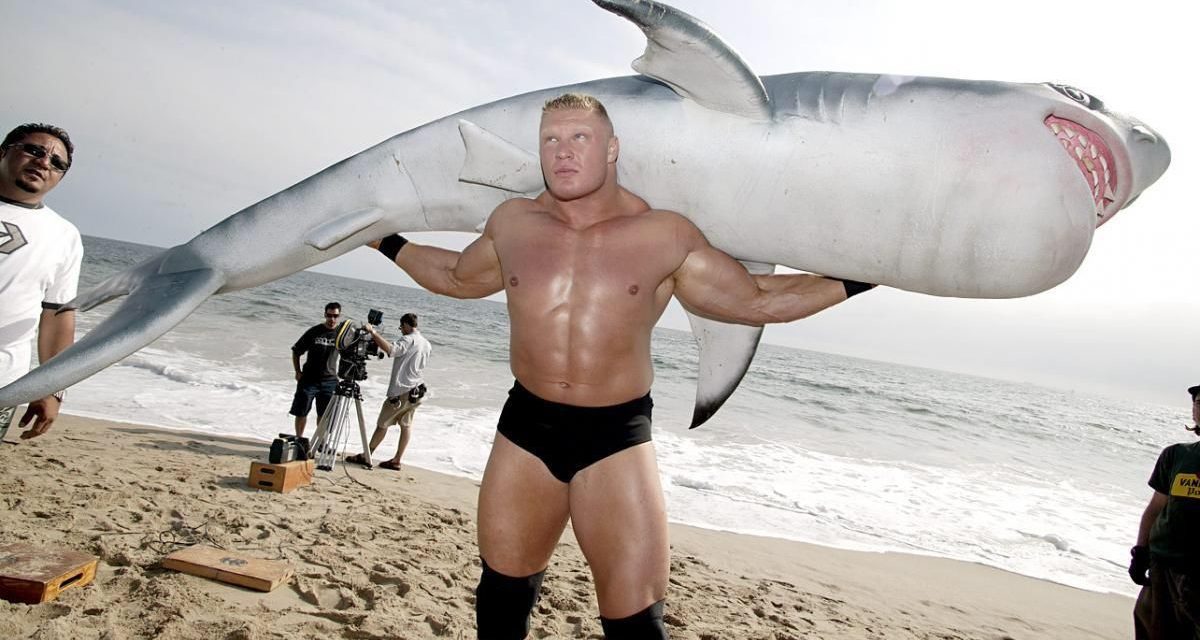 At Vengeance, Kurt Angle pinned Brock Lesnar to win back the WWE Championship. But with these two being friends and consummate professionals, it SURELY wouldn’t cause a rift between the two. Right? Mr. McMahon decided to test that theory and stir the pot between them and delay Lesnar’s rematch, simply because he could. That led to Brock challenging Vince to a match, with Vince upping the ante and putting it in a cage with Angle as the guest referee. There is absolutely nothing suspicious about Vince McMahon putting himself in a cage with Brock Lesnar at all.

Earlier in the night, Brock was laid out with a pipe with Kurt Angle conveniently nearby. The British Columbian crowd chanted BULLSHIT, clearly because they were upset that their main event was going to be ruined, and the dastardly Mr. McMahon would get away again. Luckily for them, Brock was able to persevere and make it to the ring. Brock took Vince down a few times before he passed out from THE PAIN of the attack. Angle wanted to get Brock some medical attention, but Vince wanted the pin, so Angle put him in the ankle lock. Exactly what you do when you’re attending to someone in need, just put the nearest rich person in a submission hold.

WH-WHA-WHAT? DID BROCK KIP UP? WAS THIS SOME TYPE OF RUSE? Brock levels Angle and shakes hands with Vince, and the show goes off the air as Brock beats down Angle in the cage.

So Brock turned heel again, a move that was more than justified. Babyface Brock was incredibly lame. Why was that? Well, folks, Brock Lesnar was entered into a little thing I like to call…THE DIESEL SYSTEM. 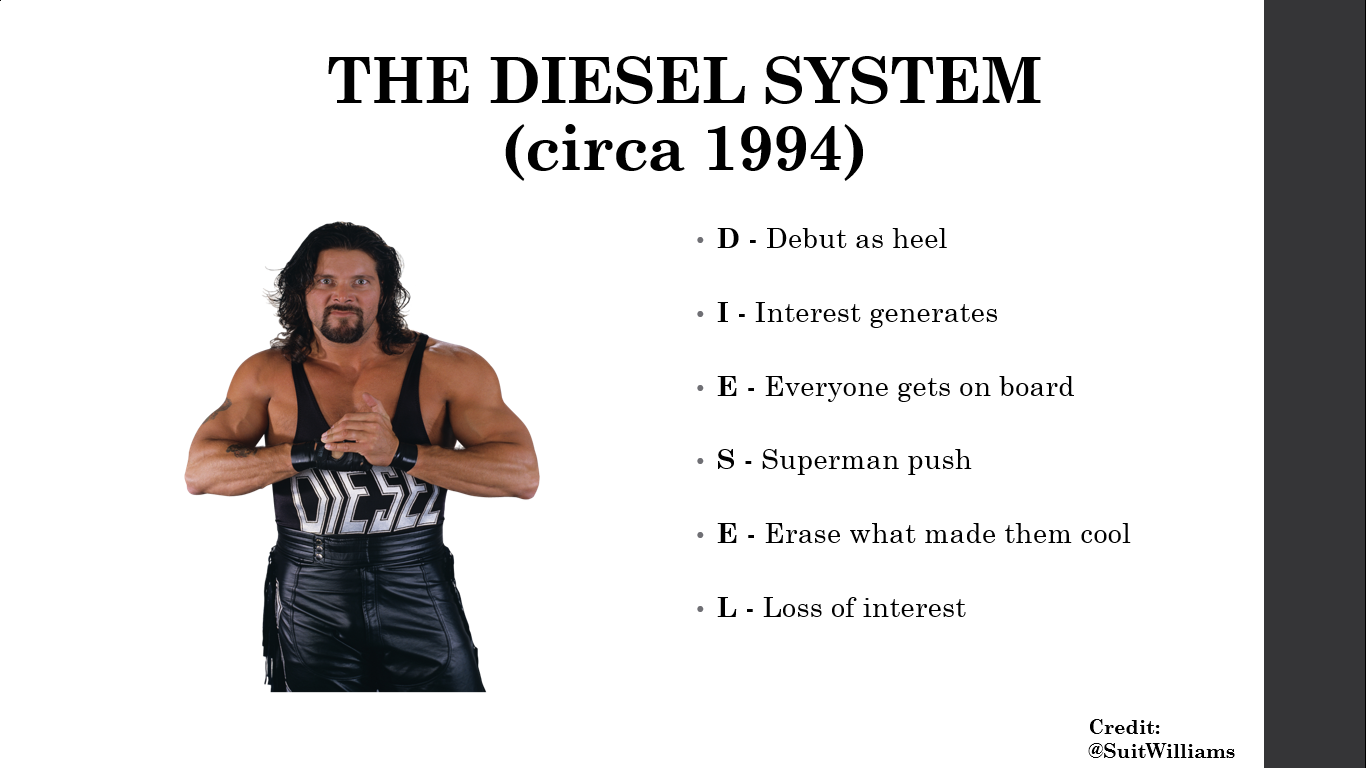 From Kevin Nash to Roman Reigns, even to guys that weathered the storm like Shawn Michaels and John Cena, the DIESEL Method is a constant in the WWE. You would think a cycle like that repeatedly happening would teach Vince McMahon some type of lesson, and it has. It taught him to try and make a business model that doesn’t require pleasing fans in order to succeed. And he learned well.

Anyway, Brock is back to being a heel which is for the best. In his show opening promo, Brock said he turned on Angle because he didn’t need Angle for anything anymore. Which makes no sense considering that Brock beat Angle for the title, then put him on the shelf for months. But whatever, Brock is a heel now. Vince McMahon has latched onto this as a good leech would, and says that he has brought out “The Real” Brock Lesnar. Cool. He also announced that Kurt Angle would defend the WWE Title against “The Real” Brock Lesnar at SummerSlam.

Have you ever seen Babyface Brock F-5 a motherfucking shark? I thought not. While Kurt Angle was out recovering from his injuries, “The Real” Brock Lesnar would have himself a few warmup matches. While these were against the closest thing to crash test dummies that he could find, they were still warmups.

A couple of signs in the crowd: “BROCK FEARS GOLDBERG” “GOLDBERG FEARS BROCK” Hmm. This match came about because Brian Kendrick spilled chocolate syrup on Vince McMahon’s jacket. I feel like we didn’t need that middle step, but how else would we fit Vince into Brock’s story? Brock threw Spanky around with reckless abandon, much like he threw that shark around in the Summerslam commercial. This beating included bringing back the powerbomb trio that he did to Spike Dudley on his debut. Brock grabbed a chair and just ended Brian Kendrick. Brock brought back all the hits on this night, smearing Spanky’s blood on his chest list he did with Hulk Hogan around the same time last year. Brock finished this vulgar display of power by sending Kendrick to the floor and press slamming him into the post on the outside.

This match is in Zach Gowen’s hometown of Detroit, and his mom is in the front row. Jesus, why don’t you just take out a gun and shoot the kid, it would get this over with sooner. At least he had good music, a little bit of Seether works for me. Brock left the ring and went up to Zach’s mom in the front row. Brock went to adhere to the Code of Honor, but Mother Gowen decided against it. Well, whatever happens to Zach, he had it coming. The bloom was well off the rose with Zach at this point, as watching a skinny kid with one leg get beat up all the time wasn’t as fun as it sounded on paper. Brock threw him around a bunch before powerbombing him and bouncing a chair off of his head. Brock then decided to beat up on Zach’s good leg by F-5’ing it into the post twice and hitting it with a chair over and over again. (Note: Angle couldn’t make the save because he’d lose the Summerslam match.) Brock concludes matters by dumping a bloody Gowen off of the stretcher and wiping Zach’s blood on his chest. I think Brock is ready to hurt somebody at Summerslam.

Watching these matches in order, you can see how Brock has grown into his role over the course of 18 months. In 2002, Brock felt robotic. He felt like a monster of the month, fresh off the assembly line. He had credentials, but he didn’t have the charisma to really feel like a difference-maker. Now, Brock feels like an animal. He’s cold and ruthless. He knows exactly what he is, and he knows how to display it too. It feels like we’re now seeing the fully-formed Brock Lesnar.

They do the in-ring instructions from the referee, to show that this is a big-time match. A sign in the crowd reads “La Parka = Ratings”. A young Court Bauer takes note. Angle took control in the opening minutes, out-wrestling Brock and getting him frustrated. Brock lured Angle to the floor to take control, which he would keep for a few minutes. Michael Cole notes that Brock Lesnar has a “lunatic fringe”. Vince McMahon notes that down for later use. Brock’s control period included using the move that Ryback would later call the Shellshock. As an unabashed Ryback fan, I popped out of my seat for that one. Lesnar ran himself into the corner post, allowing Angle to get back on offense with shoulder blocks and a chop block. The rolling German suplexes only get a two count but do more damage to Brock’s shoulder. Brock came back with a main event spinebuster, but Angle reversed an F-5 into a DDT for another near fall. Angle dropped the straps and hit the Angle Slam clean, but only got two.

Angle pulled the straps up, dropped them again, then locked on the Ankle Lock. Brock sent Angle into the ref when he broke the hold, only for Angle to lock on a head and arm choke so wacky that it would make a lucha maestro blush. Angle put the Ankle Lock on again and didn’t break the hold when Brock reached the ropes since there’s no ref. Vince McMahon came out, because it’s an important match in 2003, and hit Angle with a chair to break it up. Brock then hit an insane ONE-LEGGED F-5, but Kurt kicked out. Brock went for it again, but Angle picked the leg and got the Ankle Lock on again. Brock went for the ropes on all sides, but Angle kept dragging him to the middle of the ring, leaving Brock no choice but to tap to a massive pop. Angle retains the title, and he puts Vince through a chair with an Angle Slam for good measure.

This match was an absolute heater. These two had such excellent chemistry with each other that was on full display here. As good as their Wrestlemania match was, the dynamic worked so much better with Lesnar as the big, overpowering heel and Angle as the technical, never-say-die babyface. Even with the requisite McMahon interference that a 2003 WWE match required, this was an excellent match. ****1/2

I can’t express how much I loved that SummerSlam match. Hell, I could watch those guys wrestle for an entire hour. Huh, that’s not a bad idea. But that’s a story for another chapter of the Brockumentary. How did you feel about Brock Lesnar turning heel in 2003? Let me know on Twitter, @SuitWilliams, or on the Voices of Wrestling Discord. See you next time.