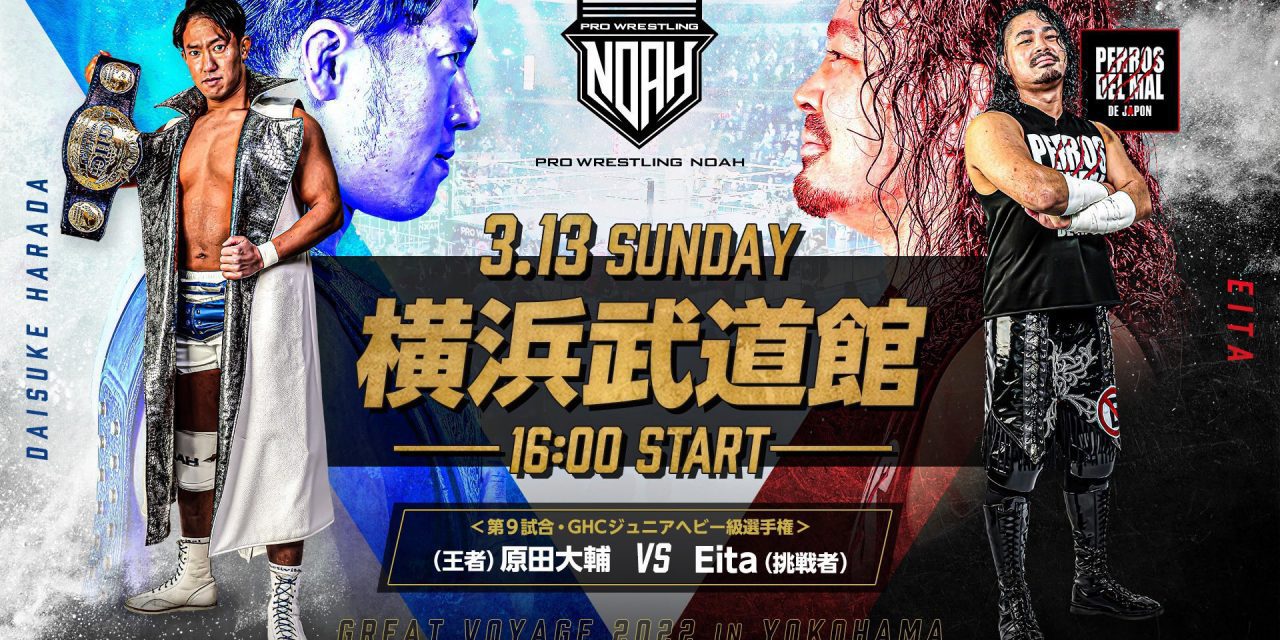 Akitoshi Saito, Shuhei Taniguchi and Muhammad Yone are on the Japanese commentary for the show, which I am listening to instead of English for, umm, no particular reason, so you’ll have to forgive me if I miss any particular context of the angles on this show.

Okada controlled the opening minutes of the match with confidence. Miyawaki eventually got the initiative and worked over Okada’s left arm. The work here was solid enough, but nothing particularly exciting, even for an opening match. The last couple of minutes did pick up and Miyawaki got the submission victory with a Cross Armbreaker.

Man, they’re really turning Okada into a geek if he’s losing to Miyawaki who is clearly positioned as a junior. I don’t like it, and I think Okada has a higher ceiling than NOSAWA seems to. ***

Marufuji has new gear that looks quite good. Kiyomiya and Mochizuki worked quite well together, as did Inaba and Marufuji. After some feeling out between those combinations early on, Inaba got worked over by M’s Alliance. Kiyomiya got the hot tag and proceeded to wrestle like he’s one of the best in the world (he is). He exudes top guy energy these days and once he lost the GHC Heavyweight Title, he put it all together. A shame that the booking hasn’t caught up to that fact.

Inaba and Marufuji had a really good closing stretch, and when Marufuji went for a Shiranui, Inaba reversed it into a backslide for the three count. Inaba got his biggest win here since joining NOAH. This was pretty darn good. Everyone looked good here and it was the right result.We were spared from a tournament final where every participant would be over 40 years old.

In a backstage interview after the match, Marufuji declared M’s Alliance to be on hiatus and he and Mochizuki left their logo armbands on the floor. I actually think it’s a permanent disbanding and also a sign Keiji Muto is going to be out a long time with that hip injury, so they have to find new things for his stablemates to do. ***¾

Lots of grappling to start, and Suzuki was great at getting under Kenoh’s skin. Kenoh also ended up in the rare position for him, of being the one getting worked over for an extended period, but he played the role well. Funaki and Sugiura then really laid into each other with strikes.

Funaki and Suzuki had a great closing sequence with each almost winning with choke sleepers. Funaki looked like he had it but Suzuki fought back and pinned Funaki with a bridging Butterfly Suplex. The style here might not be for everyone, but I dug it. I bet Suzuki challenges for the GHC National Title soon. ***¾

This was pretty fast-paced from the start. That helped to cover the weaknesses of HAYATA and to a lesser extent NIOH (who I do have a soft spot for from his K-Dojo days). Yano looked good here and continues to impress with his development.

Tadasuke and Yano had a nice little closing sequence, with Tadasuke picking up the win with a Lariat. Good stuff. ***¼

Much like the previous match, the fast pace here helped to cover the even more glaring weaknesses of some of the participants in this match. There’s not much to say about this other than everyone got in their spots, and everyone on Kotoge’s team looked good.

The finish was pure NOSAWAism with the bookerman getting a surprise roll up pin on Kotoge. Now to be fair, NOSAWA and Kotaro Suzuki will be challenging for the GHC Jr. Tag Titles on March 21, but it still does bother me given everything else going on with the booking in this company. The work here was fine, but you’ll forget about everything you saw in this match the next day. **¾

Suzuki controlled most of the match in the opening minutes. He worked over YO-HEY’s midsection. There was a nice selling touch by YO-HEY when he landed on his stomach after hitting a dropkick and sold the landing like it really hurt him.

There was a point where I thought the match slowed down towards the later half when YO-HEY was on offense, but it picked up when Suzuki regained momentum and hit the Mass Driver, which is a move I love. They teased that YO-HEY was out, but Suzuki finished him off with a Tiger Driver. I liked most of this and the story it told. ***½

Anyway, I was watching some Wrestle-1 from 2015 earlier and I was reminded of Soya’s long and shaggy beard. It’s a look he should bring back sometime.

There were, unsurprisingly, a lot of loud chops in this match, and both men’s chests turned red. I wouldn’t call this match boring by any stretch, but I didn’t think it really kicked into high gear until the last couple of minutes when they started using big moves on each other. There were also some pretty good near falls here with Shiozaki getting his shoulder up at the last possible moment, and the crowd bit on some of those false finishes. Shiozaki unloaded some offense on Soya before getting the win with the Gowan Lariat.

Watching Inamura throw Kashin around was fun. Watching Kashin on offense, much less so. The Fujita versus Tanaka sequences here were pretty good. Fujita even did a Sliding D to his upcoming GHC Heavyweight Title challenger. There were also some good sequences between Fujita and Inamura, who would be a good challenger for the champion if, you know, they built him up properly instead of still losing matches he really shouldn’t at this point. Inamura hit a very impressive looking vertical suplex on Fujita. The champion powered back, hit a Lariat, then a Powerbomb and finally a Soccer Kick and pinned Inamura by just putting a knee on his chest.

Inamura gets a raw deal again. Given the fight he put up here, Fujita could have pinned him without making him look like a geek. The proper finish here since you’re building up to a title match was for Tanaka to pin Kashin, since I doubt Fujita would have done a job to Tanaka even in a six-man tag. Match was good though. ***½

Eita went after Harada’s arms in the opening minutes. Harada sold them fairly well for the rest of the match and it forced him to get creative with his offense at times. The last few minutes of this had a furious pace with Harada trying to come up with a way to finish off Eita, while Eita kept going for the Numero Uno or Numero Uno Original. Eita finally got the Numero Uno locked on in the middle of the ring and Harada submitted. The champion failed in his V3 defense.

This was a dominant performance by Eita, but Harada didn’t look like a complete chump, he fought hard to fight through all the arm work. I’m looking forward to Eita’s reign as GHC Jr. Champion. It’s been a while since an outsider has held the title (Minoru Tanaka was the last in 2019), and that will provide us with fresh matchups. ***¾

Inaba and Kiyomiya had the advantage early on and worked over Sugiura. The younger team had a pep in their step from the moment the bell sounded. Eventually the old guys got in control, and Suzuki especially took some stiff shots at Inaba. Kiyomiya and Suzuki had some great sequences and I know some people who will be excited about that. Then it was Kiyomiya’s turn to get brutalized by Sugiura-gun.

The match came down to Inaba and Sugiura. They had a hell of a fight and Inaba got a couple of near falls. But Sugiura persevered and got a Front Neck Lock on Inaba for the victory. Sugiura and Suzuki become the 58th GHC Tag Team Champions.

That was the victory that I was expecting, though not the one I think they should have gone for, however. Everyone looked great here and worked hard, but I thought Suzuki felt like a bit of a non-factor here, he was the legal man the least of anyone this match. Once again I must say (and I do this a lot with this company), this was a great match despite the result.

Sugiura and Suzuki being tag team champions isn’t a problem on its own, but it’s part of a problematic trend in the company. ****

This was a good show. There was nothing bad, but nothing truly blew me away. At nearly four hours, it began to drag before the final two matches but those brought me back into it.

Of NOAH’s 4 heavyweight title holders, 3 are over 50 and the other is over 40. That’s a huge problem. And there aren’t any clear stories being built of who will dethrone this gerontocracy. Maybe Shiozaki will beat Fujita since he’s ended his losing streak, but that is still a couple of months away at least.

The attendance on this show was 905. That’s down from last March at Yokohama Budokan that drew 1280 for a main event of Katsuhiko Nakajima & Masa Kitamiya vs. Takashi Sugiura & Kazushi Sakuraba for the GHC tag titles. But that’s up slightly from last November’s 887 in this building for Keiji Muto & Naomichi Marufuji vs. Kaito Kiyomiya & Masa Kitamiya GHC tag title match. So NOAH’s attendance is sort of but not totally in the mud? Still down 375 fans year-over-year isn’t great.

At least the Jr. division is kind of interesting these days with Eita winning and the N Innovation stuff, right?