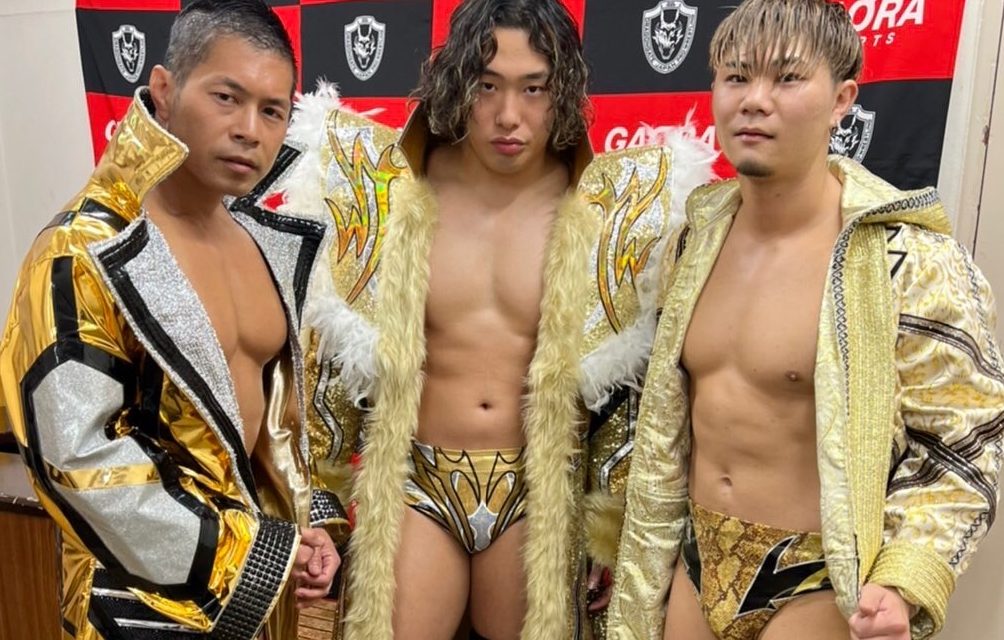 Korakuen opened with Naruki Doi, Kota Minoura and Kaito Ishida in coming to the ring for their unit reveal. Naruki Doi’s  International House of Hot Boys are officially named Gold Class. Their keynote color is naturally Gold. Gold Class has no interest in male fans, but Kaito Ishida continues his pursuit of negging the entire audience. Kota MInoura is only interested in Naruki Doi’s gift, but Doi says he’s awaiting delivery and it’ll be there between 6 PM and 8 PM.

Z-Brats wins by disqualification as Big Boss Shimizu snapped when Z-Brats attempted to run a diversion and Shimizu intercepted a chair and threw down ref Duke Sato.

Big Boss Shimizu has never looked as fierce or as powerful in his nine year career as he did in Korakuen. Any of the misguided commentary about him and Natural Vibes being goofs is now over, Shimizu has KAI’s number, he’s tired of KAI being a coward, and in Osaka he will become Dream Gate Champion. The rest of the opener was strong and to the Dragongate standard. Z-Brats, this new evolution of the heel unit, has gelled quicker than most other early ones. They attacked Natural Vibes during Party Anthem which set the town for this fast paced and often brutal opener. Even someone like BXB Hulk, whose better days are behind him, really showed up to build the big match of Champion Gate weekend. ***1/2

The post-match had Shimizu with the chair on KAI’s throat, taking both Kzy and Hulk to pull him away from the Dream Gate champion. Afterwards, KAI tried to taunt him saying he lost his cool, but Shimizu shouted that there would be no running or hiding from the Big Boss in Osaka.

Ryu Fuda, in my opinion, has struggled in comparison to the rest of the class of 2021. Although Fuda’s proficient as a striker, it felt very much like that’s what all he could in comparison to his contemporary Takuma Fujiwara, who is having four star singles matches four months into his career. In this atomicos, Fuda took the big step forward and gave those strikes some zing which really made him feel more dangerous and cohesive. All eight wanted to put forth their best effort, Strong Machine J had a really fun exchange with Ishin Iihashi which bloodied the rookie’s mouth, and the Don of Okinawa got the win leading into the big Ryukyu Dragon show tomorrow. Guruken made sure that everyone in the crowd was aware of the show in the post-match, and asked U-T to win the Ryukyu Dragon Tag Team belts with Kzy tomorrow as it’d be best for Ryukyu Business. He’s the real deal maker of wrestling. ***1/4

Yuki Yoshioka put away La Estrella with the Inferno.

The Twin Gate champions revealed the winning team name from their Twitter survey as D’Courage, the D representing Dragon Dia and Courage being translated in Japanese as Yuki.

Dragon Dia & Yuki Yoshioka revealed the team name they selected from the Twitter suggestion is “D’courage”.

It’s a combination of the D from Dragon Dia & the Japanese word for courage “yūki”, of which an alternate spelling is Yoshioka’s first name. #dragongate#dcourage pic.twitter.com/ZjJmppq7Di

Takuma Fujiwara turned 20 on February 4th and has already become the runaway favorite for the worldwide 2022 Rookie of the Year award. He’s coming off of an exceptional singles match in Kobe against Jacky “Funky” Kamei and winning the Future class five-way at Memorial Gate. Dragon Dia knows he has a phenom on his hands and in the opening minutes of this match was stunned that someone in the company is faster than him. Their Brave Gate match at Champion Gate is easily my most anticipated match, and this did a decent job building that up.

The rest of the match was a bit underwhelming to be honest. La Estrella is still trying to find his footing in a post-Masquerade world, and was a step out of sync with D’Courage in almost all exchanges. D’Courage showed off their teamwork, but it felt a bit unsatisfying against a guy who is as hit or miss as Estrella. This was frankly a bit of a disappointment in my opinion. **1/2

Jason Lee is a man adrift. After being the last one upholding the Masquerade name, he’s been progressively more and more gaslt by the psychotic Shun Skywalker. This match was very cool, but very much a story match. Jason got beat down continually by Shun, who was trying to convince him that he should just quit wrestling and that his better days were behind him. It took Skywalker paintbrushing him continually with slaps and shoving his head into the turnbuckle for Lee to fire up and erupt the Korakuen crowd. That wasn’t enough and Shun went into his final gear and ran through his former teammate. ***1/4

After the win, Shun started to choke out Jason, which brought out his Hong Kong mentor Ho Ho Lun for the save. But Ho Ho is just one guy and the remainder of Z-Brats fought him off until HIGH-END stopped the attack. Skywalker has clearly lost his mind as he was very calmly telling Jason no one was going to save him as YAMATO got between the two. YAMATO invited Jason to join HIGH-END which quickly got all of Natural Vibes out here trying to get Jason Lee to join them instead. Kzy and YAMATO were arguing over who wanted Jason Lee the most and all Shun could say was “no one is here to help you.” Eventually this brought out GM Ryo Saito, WHO HAD TO WRESTLE IN THE NEXT MATCH to calm things down. He set up a three-way with Z-Brats, HIGH-END and Natural Vibes for the April 25th Korakuen Hall for the custody of Jason Lee

This was one of those classic “No one can do this but Dragongate” segments: absolutely insane but a blast.

Ten years to the date of their formation, Dragongate had their first reunion of The Jimmyz, one of the most enduring units in modern Dragon System history. This played the hits in the way that long time fans would want. They got K-ness in on the rubber band attack along with Ryo Saito’s first televised match in months (being a General Manager is hard work). Much like last month’s M2K reunion, this was a good vibes match that let everyone see a mostly complete Jimmyz (we miss you Mr. Kyu Kyu Naoki Tanizaki Toyonaka Dolphin, even if we are very glad to not have to type or say that name in full anymore) line-up for one last time. ***

Afterwards, we had the announcement of the official K-ness retirement match of him teaming with his eternal partner Susumu Yokosuka as Knessuka one last time versus his lifelong rival Dragon Kid & Kzy along with a second Toryumon Reunion on June 3rd!

This just continued the Eita & Maria and Z-Brats storyline like everything else with these four over the last month and a half. Eita didn’t want to be there, Maria wants her man, SBK and H*Y*O were delighted to punish both of them. This took a necessary step of Eita and Maria getting the upper hand a little bit with Eita shoving Maria out of the way so he could hit SBK with the box attack. Z-Brats powerbombed Maria onto a bunch of chairs and continued to attack until Eita came in for the save. They then got into it on the microphone, Eita asking what it would take to get Maria to leave him alone, Maria deciding she wanted a belt, and they made the Twin Gate match on the second night of Champion Gate a three-way tag. NR

The official debut of Gold Class had them almost run through the former Super Face unit of HIGH-END. It’s a real air of contrasts between the two units. One was clearly positioned as the big protagonists last year and flatlined soon after. They feel awkward, and aren’t a cohesive group, just a collective of individuals under YAMATO.

Gold Class doesn’t feel that way at all. They’ve spent the last month getting on the same page and now their offense and teamwork already feels like they’ve been together for much much longer. The Gold Class act already feels polished both in concept and execution: it’s not just that Naruki Doi is obsessed with turning the crowd into the old 90/10 women/men ratio, they’re obviously playing up that they are a Host Club to delight the female fans. The work here was all solid. We got the rehash of Okuda and Ishida that we will see until the heat death of the universe, Minoura threw people around. They played the hits in an effective manner. ***3/4

To close out Korakuen, Naruki Doi’s present to Kota Minoura finally arrived. Suddenly the Masquerade theme played and someone came out in Minoura’s old costume. Upon unmasking it was Takumi Hayakawa. Naruki Doi promptly renames him Minorita and he’s now a mascot for Minoura. Minoura was befuddled, Ishida was besides himself in laughter and Minorita stunningly looks A LOT like Kota Minoura now.

Naruki Doi’s present to Kota Minoura was….Takumi Hayakawa who will now be known as Minorita. See the resemblance?

Watch the segment on demand with English commentary for the full story. https://t.co/SLoG76fQSY#dragongate#dragongatenetwork#GloriousGate2022 #GOLDCLASS pic.twitter.com/MgKICdGHvL

As a go home for Champion Gate, this was very effective. All the storylines, new and old took necessary steps forward. Gold Class’ debut feels like something special and a Jimmyz Reunion brings everyone the good vibes as K-ness’ career comes to a close. The ring work of this show wasn’t excellent, but everything delivered in a way that only Dragongate can to build anticipation for Saturday and Sunday’s big shows in Osaka. Thumbs up. 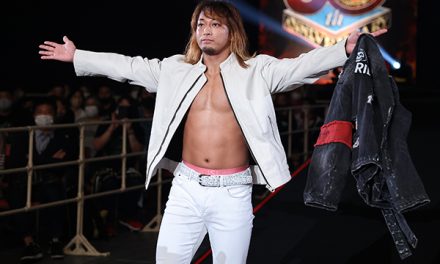 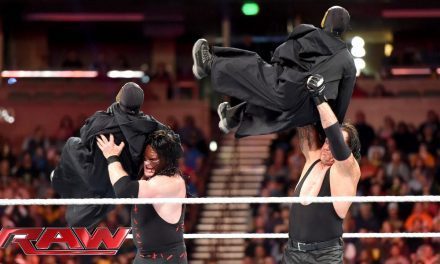