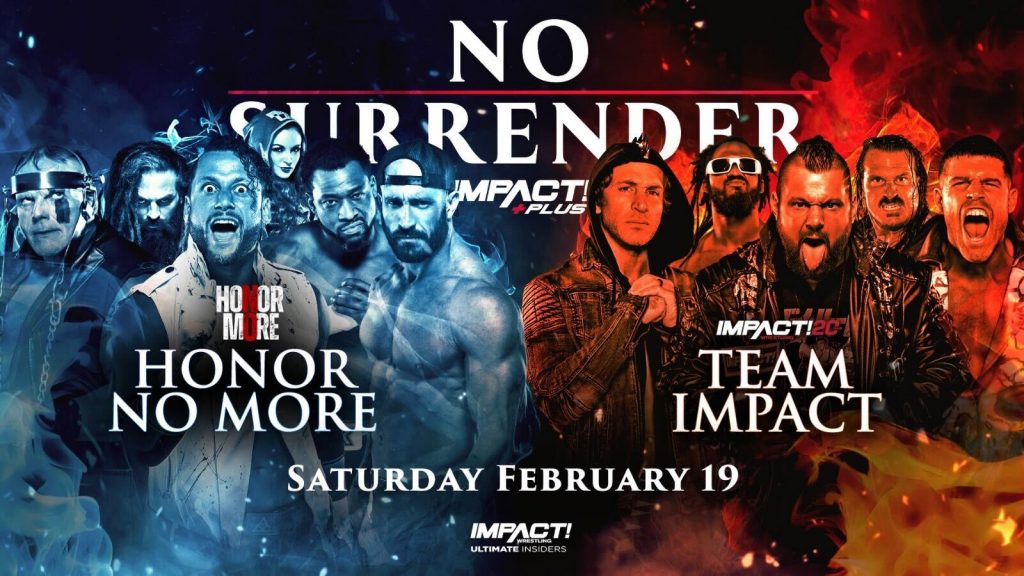 Impact Wrestling aired their first Impact Plus special of 2022 this past Saturday, live from the Alario Centre in Westwego, Louisiana. Headlining the show was a 10-man tag between Honor No More and Team Impact and Moose defending the World title against W. Morrissey.

Countdown to No Surrender

The pre-show began with Miguel’s first match since he defended his X-Division title at Hard to Kill in early January. He’s since been dealing with some personal issues but is now back and on this night wore some Breast Cancer Awareness-inspired gear in tribute to his mother which I thought a lovely touch.

Unsurprisingly, this was Miguel’s get-well match before he gets back to defending his title. They got a couple of minutes more than in their previous meeting and the match was all the better for it. Trey looked strong and confident but Skyler got enough in to make it competitive before succumbing to the Meteora. **3/4

This one was all story and thankfully pretty quick.

Another wrinkle to the general will they/won’t they story The IInspiration and The Influence have been telling in their feud for the Knockouts Tag titles has been The IInspiration’s continued attempts to recruit Kaleb with a K from The Influence. That began to pay off here as Kaleb, previously a big help to Tenille in her singles matches, proved a hindrance, inadvertently distracting her and allowing Havok to put her down for three with the Tombstone. **

A perfect way to start the show – a fast-paced, frenetic X-Division with some stakes attached and a surprise winner at the end of it.

In my preview I explained that I thought Something would be the one eating the pin, a by-product of his contract status seemingly being up in the air, but I ended up being wrong. Well, wrong in the short-term at least – should Something get his title shot at Sacrifice in early March, that leaves the door open for Chris Bey to challenge at Rebellion and Ace Austin to get into a proper program with Mike Bailey over the next two months.

After a tremendous showcase of athleticism and high spots for all four men, the last two in the ring were Austin and Something. Austin went for the springboard kick but got caught and spun right round by Something into the Black Hole Slam for three. I wonder if that means he’s re-signed? ***1/2

I have to admit, I was fairly underwhelmed by this. There was nothing wrong with it, it was a perfectly solid wrestling match involving two very talented guys, but it seemed rather more one-sided than I’d hoped for.

Taurus got to show off some of what he’s capable of and both men had a couple of really nice hoss moments but it seemed to never really get off the ground, a Tsunami Splash from Jonah finishing off this gentleman’s three in a shade over eight minutes. ***

Eric Young’s promo for this match that aired earlier in the show was fantastic. He spoke about wanting to leave a real legacy in Impact and to be noted for having great matches. If this match is any indication, EY’s quest is off to a great start.

White took on the role of babyface here and thrived, with Young positioned as the gritty, heel veteran. Young’s digging in of body shots while both men were battling to land a suplex was one of the nice but subtle touches this match was full off.

It was back-and-forth all the way through and the finish managed to encapsulate that spirit of competition, both men consistently reversing the other’s finisher attempts before White eventually broke the pattern to land the half-and-half suplex and put Young down with the Blade Runner. ***1/2

I had made a little list of who the potential outside challengers could be here and Alize was on that list, although she probably wasn’t the most exciting name available to them given the free agents currently on the market. That said, I can also understand them wanting Deonna to get some more routine defenses in before going for a bigger challenge.

The match itself was fine, although it definitely seemed a step below Deonna’s usual standard. I think both women have a better match in them but this was clunky in places and it didn’t really click for me. **1/2

Right up until the finish, I was thoroughly enjoying this. Cardona looks so much more comfortable in the ring when channeling the heel mannerisms he’s perfected on the indies and the subtle things here were cementing his turn. In his first match with Grace, he hesitated to land the Reboot (his running boot to a seated opponent in the corner) because she’s a woman. This time he landed it without hesitation and laughed after doing so.

Grace, for her part, showed real fire and I bought into her role as the wronged former champion but the finish seemed so stupid. Cardona, not for the first time, brought a chair into play but before he could use it, Grace low-blowed him directly in front of the referee. I can see the argument that they were trying to show that in her frustration with his shenanigans she got carried away but it seemed so odd. Her hitting Cardona with the chair after the bell got a good cheer and signals that this feud must continue. **1/2

When reviewing shows, I feel conscious that I’m star rating on a curve; the quality of the match is adjusted by what’s gone before and the history of the people involved. I suppose it is all relative really but it’s something I often spend too long pondering about.

This time I had no qualms about being the high man because this was the best Good Brothers match in forever. That was for one reason and one reason alone – it had ENERGY. Tama and Karl winging hands at each other from the opening bell was great and set the tone for a genuinely good tag match with big counters and effective hot tags. Commentary played up that this was a first-time match between former close friends and it had that feel to it.

A sign of how much I enjoyed this is that the finish actually improved my rating. Jay White turning on G.O.D., hitting Tama with the Blade Runner in the middle of the ring and setting him up for a match-winning Magic Killer by The Good Brothers was a big moment. It set up the long-awaited program between Tama and White, it brought The Good Brothers back into the Bullet Club and injected real energy into the remainder of their title reign. For me, that ticks all the boxes. ***1/2

Similar to the Jonah/Black Taurus contest earlier in the night, there was nothing wrong with this match but it ended up falling really flat for me. Ultimately, I think the slow grappling start made for a pleasant change but meant they needed a real spurt of pace down the stretch that they never got. I think the other source of irritation came from the finish.

The interference from Savannah Evans and Chelsea Green was logical in the context of the build, with Mickie rushing Tasha into Chelsea to set her up for a roll-up with bridge to retain, but it marked the third match in a row with shenanigans in the finish. While better than the route they went for with Grace and Cardona, I’ve fatigued of the dubious finishes by this point. **1/2

Coming into No Surrender, I was a little concerned about how this match would look. In the end, they opted for the WWE-style PPV hoss fight and that resulted in pretty much the best version of this match possible.

They managed to match the intensity of the build right off the bat, repeatedly running into each other in the middle of the ring before Moose forced Morrissey to the outside with two big Spears. While out of the ring, Moose was sent into the barriers twice before putting Morrissey down with an Uranage through the timekeeper’s table.

For some people, they probably went a bit heavy on the finisher spamming in the end, with Morrissey hitting two BQE Powerbombs and Moose needing four Spears to get the win but they managed to protect them enough in my view. A couple of noticeable botches bring my rating down slightly, as does the fact I think they probably could have shaved a couple of minutes off to perfect things, but this was better than I expected and that’s a big plus in the favor of both guys. ***1/4

So, my prediction for the main event proved spot on – Honor No More won and they’ve now got a new leader in the shape of Eddie Edwards, who has turned heel for the first time in his lengthy Impact tenure.

The Edwards turn was telegraphed earlier in the night when they announced that he wasn’t ‘medically cleared’, with Willie Mack stepping in as Team Impact’s fifth member. The bigger confusion for me, however, was that the match was a straightforward ten-man tag rather than the Hardcore War I had been led to believe we were getting.

That aside, the match itself was perfectly solid. However, going over 20 minutes with a format like this means that you end up with far too many broken-up nearfalls and the middle stretch of the match feels too repetitive.

Things picked up with the ref bump towards the end as that signaled complete chaos on the outside and dives galore, including multiple big ones for that lunatic PCO. Rhino stood tall at the end of that sequence and was lining up Maria Kanellis-Bennett for the Gore before OGK stepped in to protect her. Eddie then hit the ring, kendo stick in hand, to seemingly level the score for Team Impact before laying out Rhino with a shot to the head. Eddie then went ham, destroying the stick as he laid out the whole of Team Impact and allowing Kenny King, albeit after a bit too long of a delay, to pin Rhino for the win. ***

I’ve seen some people question Eddie’s turn, calling it a ‘turn for turn’s sake’ but for me, it works. It’s a decision I’m in favor of and one I think particularly necessary in the light of Josh Alexander’s departure.

No Surrender was a solid and newsworthy offering from Impact Wrestling. There’s nothing you need to go out of your way to see but there was nothing dreadful either. Some of the finishes through the middle portion of the card bothered me but by and large Impact got things right and they’ve got a lot of irons in the fire as they head on towards Rebellion in April.

The Josh Alexander situation does remain the elephant in the room, though… 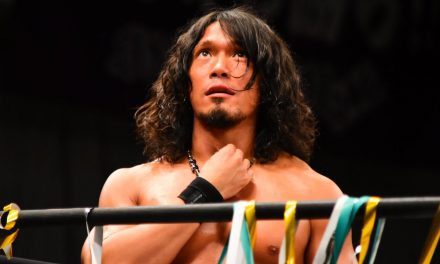