When Kinya Okada is in matches like this, matches where the opposing team is so utterly pinnable, I just spend the whole time wondering when it’s time to pull the trigger and let him beat somebody. I know that, when the time comes, it won’t be in some rando Korakuen opener against Aleja and Haoh’s dumpy ex, but when? He’s got the gear, he looks the part, and he kicks ass out there. Mutoh just fell apart like a crash test dummy, let’s DO THIS!

Anyway, this match was fine. Fujimura was typically energetic and, in the match’s best moments, Aleja matched that energy. Nioh finished Fujimura with a Stuka Splash, an appropriately shlumpy move for a shlumpy dude. **½

Man, let’s hear it for Haoh. My man is out here doing an Eat Pray Love. He got away from a crappy partner and reevaluated his self-worth. He’s dressing better, he’s making better friends, and hell, he’s inspiring all of us to remove the deadweight Niohs from our lives and look inward. This is powerful stuff, folks.

And Tadasuke? Well, he’s cool. He wears sunglasses and had a four-star banger yesterday with Harada. I’ve had this match circled.

We got a fun style-clash of Haoh’s zippy offense against Tadasuke’s bully-ish physicality, albeit a condensed version. A late rush of crafty maneuvering by Haoh was cut short by Tadasuke pulverizing him with lariats for the win. If nothing else, this was an ad for the depth of NOAH’s junior division. ***¼

Ironhead Fujita beat Nakajima’s ass so bad yesterday he needed a day off today. So instead, the GHC champ, flanked by Kenoh and Soya, would have to settle for the Funky Express.

The big, funky boys made great fodder for Kenoh and Nakajima’s kickpads but, believe it or not, the real joy in this match came from the pairing of Saito and Soya. Their collisions were slightly sloppy and barroom-esque, just like it should be when two dudes who look like Beethoven (the dog, the dog!) butt heads. Soya took it with a lariat in a match just long enough for everyone to say “hi” to the live audience and get a head start back to the hotel. **¾

Unit clashes in the NOAH junior division are a dime a dozen and, often, difficult to get invested in. Hell, I breathed an audible sigh of relief when the unit alignment chart was displayed during this match. That said, the Perros/Stinger ongoing feud has been one of the most engaging feuds in the company. Even if these two specific teams aren’t the best lineups for showcasing why, it’s usually worth a watch when these units collide.

Approaching the halfway point of the show, Seiki Yoshioka and YO-HEY’s high-speed exchanges were the first things to truly pop off the screen, especially when contrasted against NOSAWA and HAYATA’s tempered grappling. Yoshioka eventually put YO-HEY away with his Crash Driver, still one of the gnarliest finishers in the game. I’m happy to see Yoshioka get the win. He’s been a constant highlight since his arrival in NOAH and deserves to be treated as one of their top-level juniors. ***

When Eita began floating aimlessly through 2021 over in Dragongate, I wish someone told me we were only a year away from him teaming up with Kotaro Suzuki and Super Crazy. And how cool is it that when the bell rang, he stood opposite Kaito Kiyomiya? I’ve written about how well-hidden they’ve kept Eita as an in-ring competitor, and they played on that here. A former Open The Dream Gate champ faced off with a former GHC champ and spent a good minute or two teasing making contact.

Eita finally engaged with a cheap shot, and we got a fun encounter between the two. The match did a good job pulling on multiple threads; STINGER representative Ogawa was still dying to get a piece of Eita, and Eita would eventually lunge at the apron to brawl with both Ogawa and Kiyomiya. Yano took the bulk of the match, getting ample time in the ring with all three PDM members before eating a Blue Destiny from Suzuki for the pin.

PDM attacked Yano in the post-match, and a brawl broke out. Kiyomiya came to Yano’s aid while Ogawa made a beeline for Eita. Again, we trudge ever closer to a Yoshinari Ogawa/Eita meeting. Goddamnit, give me what I want, NOSAWA. ***¼

Look, these teams are totally mishmoshed together with barely any rhyme or reason. It’s a group of at-or-around A-level talent putting in a B-level performance so the crowd can see everyone — do the math, it’s pretty good. If I’m being honest, if I just hurry up and finish this blurb I get to watch Shiozaki/Marufuji, so let’s keep it moving.

Aaaah, okay, fine. The stars of the match were Daiki Inaba and Yoshiki Inamura, and it makes sense because they’re two men that still have so much to prove. Inaba’s coming off an electric performance yesterday, brawling with Marufuji even beyond the bell. He maintained that momentum (momentum he’s been building up since having a killer N-1 last year) in a heated clash with Sugiura.

Yoshiki Inamura took the closing stretch against Tanaka. He’s easy to root for these days, especially when you consider that we don’t know how many opportunities he was cheated out of by KENTA’s injury. He’s eventually felled by a Sliding D but put forth a fiery, convincing effort. I thought the big lug was gonna pull it off. Okay, for real, let’s watch the main events. ***

The two shook hands at the opening bell, which immediately harkened back to their last GHC title bout. That night, they clasped arms and refused to let go while trading deafeningly loud chops with their free appendages. An underrated gem from Go’s awfully violent title reign. I’m telling you, it was gross, man. I’m fired up.

Marufuji, wisely, focused his early offense on Shiozaki’s arm. It was a means of leveling the playing field, as the match was clearly establishing Go as the more powerful of the two. They would again clasp arms and recall their chop duel from 2020, but it was missing something in atmosphere and gravity this time around. It did, however, affirm that Maru hadn’t done enough to weaken Shiozaki. The exchange ended in a momentous Go Flasher (shot beautifully from above, mind you — NOAH production keeps winning).

Here’s where things picked up. Marufuji had to get back to work on the arm, and he’s still so creative and fun to watch when he’s got a target lined up. His slew of signature spots — the coast-to-coast springboard dropkick, the Perfect Keylock, and on and on and on — all honed in on Go’s licensed weapon of a limb. After paying homage to his injured tag team partner with a Shining Wizard, Marufuji was able to counter a slew of weakened lariat attempts and win with an extremely Marufuji-ish roll-up. What a tricky bastard.

The Shiozaki Challenge Series rolls on. Go was able to flex the moveset and look more imposing than he did in prior matches with Sugiura and Tanaka, but still falls short to one of the craftiest vets in the game. ****

Over on the VOW Podcast Network’s very own Emerald FlowShow, Gerard talked about you never quite know what version of Funaki you’re getting when he comes to the ring. There’s the Funaki that’s content to do a little matwork and call it a day — a.k.a. the Funaki that ended Kenoh’s National Title reign with a plop. But then, there’s the Funaki who came out in the N1 semi-finals against Katsuhiko Nakajima (a show I reviewed with Gerard). That’s the Funaki you want, a guy who’s giving you eight psychotic minutes to either kill him or have your lights turned out.

I’m happy to report we got the latter today. Funaki looked extremely cool in his Kongo red with the whole squad lined up behind him. And who could ask for a better dance partner than his former M’s Alliance teammate Masaaki Mochizuki? After a feeling-out period on the mat, the two unleashed vile open hand shots on one another, almost resulting in an early knockout to Mocchy.

From there? You know the deal: two angry men in their fifties gracefully bashing each other senseless. Eventually, Funaki got Mochizuki back to the ground where he held a distinct advantage. He overwhelmed his challenger, transitioning from a triangle choke to the full mount where Mochizuki eventually gave up his back. From there, a rear naked choke variation finished the job. Nine minutes flat, baby. If we keep getting THIS Funaki, he can hold onto this belt as long as he wants. ****

Two nights in, NOAH’s Step Forward 2022 series is a success. New production techniques are paying off and the matches are delivering as well. While night one may have had a stronger undercard, today’s show delivered a strong National title match and an even stronger entry in the Go Shiozaki Challenge Series. 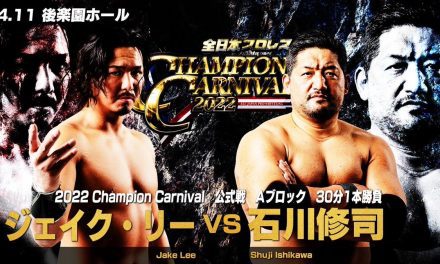 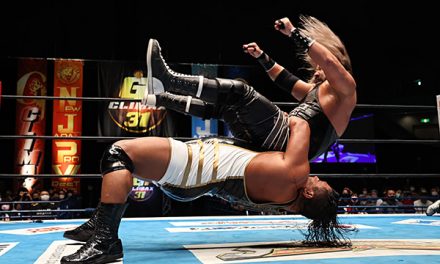