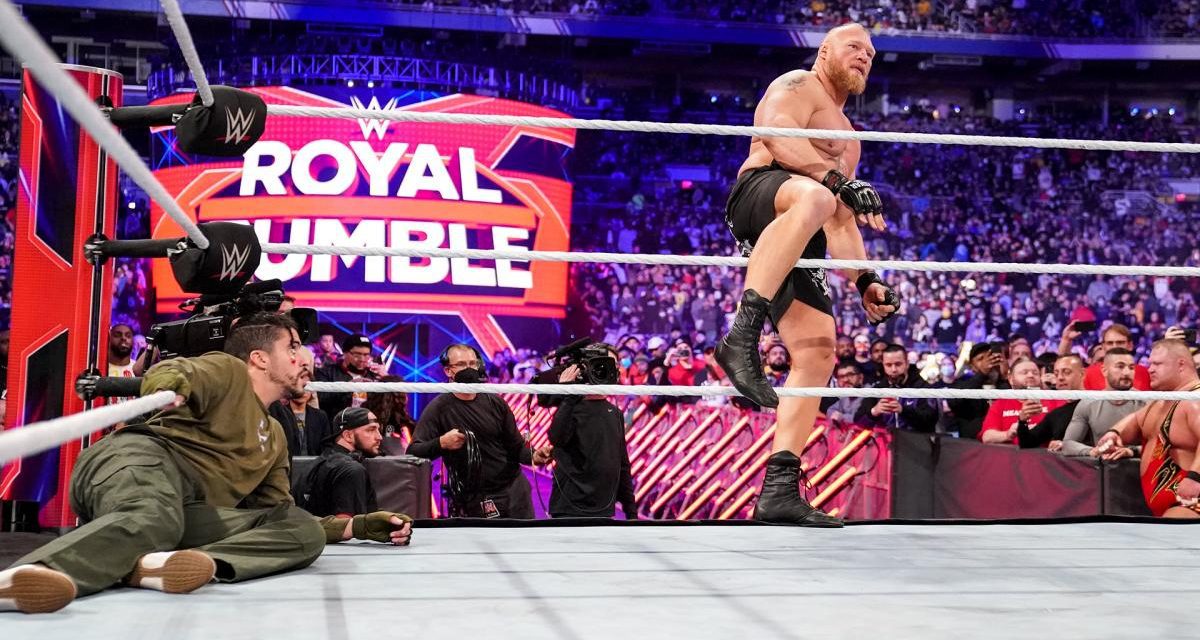 How did you feel while watching the men’s Royal Rumble match on Saturday?

Were you angry that Brock Lesnar came out and won the match?

Bored by very few of the names having any real superstar aura?

Amused by WWE’s ability to consistently do the wrong thing?

Personally, I was sad.

I thought the match really signified WWE’s consistent issues with making individual talent feel relevant and establishing fan interest in various talents that the company should be pushing. One after another, a wrestler would come to the ring to apathy from both the crowd in the arena and for fans watching at home. In most cases, the person hitting the ring was a wrestler who had a lot of talent and at one time would have been considered a person that could be a future star in the company.

The Royal Rumble more than anything, is a reflection of the booking of the company over the past year. In one hour, we get a glimpse at how established a series of 30 wrestlers are and what kind of reaction they get from the fans. It’s a great barometer to see what stars are really over and who might have a chance of becoming a top star, even if they don’t necessarily win the match.

The 2022 incarnation of the match hammered home just how ineffective WWE’s booking really has been. Out of the wrestlers that WWE has introduced to their fans over the past five or six years, nobody was genuinely over with the audience, with the possible exception of Matt Riddle, or felt like a big star. The biggest reactions were served to older names (Randy Orton and Shane McMahon) or for celebrities (Bad Bunny and Johnny Knoxville) while all the “new” names, from Austin Theory to Damien Priest to Ricochet to Madcap Moss and a host of other names WWE has failed to get over hit the ring to minimal fan reactions.

Even names like Drew McIntyre and Big E, talent WWE has given world title runs too, were not exactly hot stars in this match. That is a reflection of WWE’s inconsistencies when it comes to booking talent. A guy like Drew McIntyre can win the Rumble one year and win the title at WrestleMania; but if he loses the title and just floats around the mid-card in lame feuds that lack real creative direction, he is going to get cold and fans will not be excited to see him win the Royal Rumble.

Fans who are upset with Brock Lesnar winning the match are somewhat misguided; the reality is nobody in the Royal Rumble match really felt like they should have won the Rumble. Sure, anybody can technically win the Rumble, but the key is to have somebody with some organic momentum who can springboard that win into greater popularity, setting up an important match for WrestleMania. This match didn’t have anybody like that; the best options were Big E, coming off an ice-cold world title run where he was firmly established as a second-tier champion; or Drew McIntyre, who had been muddled in a feud with Madcap Moss and Baron Corbin.

That is the failure of WWE’s booking; the company has consistently failed to get talent ready for major pushes. The pushes often come out of nowhere, like Big E randomly winning Money in the Bank with little hype and then winning the world title via cash-in a few nights later, or they don’t come at all. A well-booked promotion would have a number of talents who felt ready; either new stars they are looking to push, or established stars who feel like they are heating up.

WWE simply doesn’t have that.

The Royal Rumble match hinges on that principle, the fun of the match is seeing different names come out, particularly names that feel like they have a chance to win the match. If the names just feel like a bunch of guys who can’t win, the match comes across as very boring. That was why the 2022 version of the match flopped so hard; with the exception of Lesnar, nobody felt like they could REALLY win the match. It might as well have been a series of job guys from 1-29 and then Lesnar.

This is a noticeable change from just a few years ago. Fans can go back to the horrible 2015 Royal Rumble and watch the crowd reactions; in addition to Daniel Bryan, there were names like Bray Wyatt, Dean Ambrose, Dolph Ziggler, Bad News Barrett, or even comedy lower-card acts like Damien Mizdow and Zack Ryder, that got good, lively reactions from the audience. The drop-off from the number of midcard wrestlers who feel popular from back then to today is startling.

The reason for that is all due to WWE’s booking; over the years the company has taught fans that no matter how hard they support someone, creatively the company will do whatever it wants. Why cheer for a mid-card act if you know the end result won’t be any different? The company has blown it with so many different talents over the years that it’s now almost impossible for anyone to achieve any organic momentum. Fans understand that if the company isn’t really behind somebody, then they shouldn’t be invested in them.

That kind of thinking was eventually proven correct on Saturday. Brock Lesnar, a “real” star in WWE, came out and coldly eliminated everyone. If you were a fan truly hoping Big E or Drew McIntyre would win, you were dealt yet another harsh lesson in being a fan of WWE. The booking just continues to reaffirm fans apathy for everyone on the roster except for a few chosen names.

On the latest episode of the Gentlemen’s Wrestling Podcast, Jesse Collings (@JesseCollings) and Jason Ounpraseuth (@JasonOun95) discuss the history of WWE in Saudi Arabia. They talk about why WWE is doing the shows, the use of entertainment as propaganda, the criticism WWE has taken for the shows and the future of the events over the next several years.