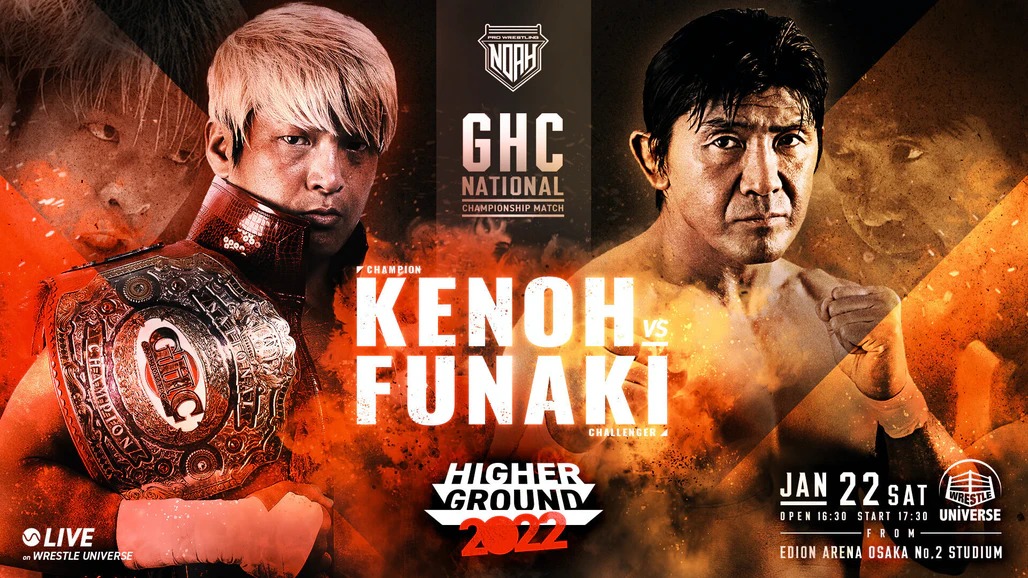 NOAH feels like a tonic at the moment.  Their shows this year, outside of the 1st Jan, haven’t been lighting notebooks on fire, but have been sprinkled with interesting stories and solid, hard-hitting action.  With two title matches, and Shiozaki opposite Nakajima again, this show promised to continue that trend.

Kongo explodes, to a certain extent.  At Bumper Crop, we saw Haoh burst away from the relentless brutality of the Kongo regime and ask Daisuke Harada to take him in.  I, for one, agree with the decision.  Kongo strikes me as a very irascible environment and Haoh needs to think of his future.

The explosion of the breakup was evident in the work, as this was a whirlwind of strikes and harsh chops.  Emotions ran wild as t-shirts were thrown back and forth, as both men seemed to be scratching for the most disrespectful symbol.  This is exactly the kind of story that should be told on every undercard and is often woefully missing.  Set up a blood feud and have wrestlers grab each other’s throats.  It was refreshing to have an opener that had some meat on its bones, feeling like a chapter in a longer story.

Nioh was on fire, diving through ropes and turning up the blue-eye fire.  Unfortunately, Nioh wasn’t overly keen on taking significant bumps in the early match and some of the offence fell a little flat.  The slaps and chops can’t be denied, however, and the match was structured brilliantly.  Nioh clearly felt like he was there to teach the traitor a lesson, but as the red marks on his chest deepened, he seemed to realize that Haoh was much more invigorated than he thought.

The match constantly returned to chops and strikes, at every opportunity.  Both men worked until they collapsed and the bell rang for a time limit draw.

Nioh’s neck was Kongo red by the end of this, and was a testament to their hard work.  ***½

Greasier than a Salford kebab, NOSAWA Rongai facing off against the ridiculousness of King Tany is a confusing image.  It’s low on the card and it covers many sins, but the drama of a broken plastic crown is not the most captivating story to me.

The action picked up slightly when Suzuki and Yone had a nice little scrap, but this was a bit of a wrestling black hole.  There was a match happening in front of me, but there is very little to say about it.  There was a hint of cooperation at times that suggested wrestlers going through the motions and, without the company of Pickering and Fulton, I found myself reaching for my phone far too often.  King Tany got the fall and we all moved on. **½

HAYATA is fresh off his Junior Heavyweight run, and is facing YO-HEY at an interesting point from a booking POV.  This felt like an opportunity to give YO-HEY a booking boost, and the match certainly started like that.

YO-HEY flew around the ring, booting and battling the recently dethroned champ from corner to corner, but it wasn’t long before HAYATA gained control.  It was an education, controlling YO-HEY with hammerlocks and wrestling holds.

The arm work escalated nicely, with bursts of YO-HEY speed being constantly brought to a halt with a wrench or a twist.  It was a little long and little plodding at times, but well worked

HAYATA’s straight-faced wrestling won him the tap, but it YO-HEY who held my interest.  ***

Putting Nakajima against two recently defeated challengers was a story chewed on brilliantly by the reigning champion.  He went through the motions with Shiozaki in the early match, before simply turning his back and tagging out before anything significant happened.  Of course, Go has the caveat of returning from injury and that simple act of disrespect felt like a small piece in a bigger story.

Soya and Kitamiya took a lot of the focus, especially when the action broke outside.  Two beefy boys battering each other is always welcome, especially with the red streak of Aleja launching his way across the background.

Harada was the hardest worker in the match, taking a beating from all three Kongo members. It was a shame that he didn’t seem able to transition into a hot tag, but perhaps that was more on Kitamiya than the junior champ. Kitamiya is the Pearl Jam of wrestling – I can recognize that he’s very good and I am rarely disappointed.  At the same time, however, he’s just not very exciting.  His ceiling is all too apparent.

This match was really nothing beyond entertaining moments.  The heavyweights seemed to be letting the juniors do all the work, but it didn’t feel like it was building to anything in that division either.  Harada’s effort was apparent, but this was a pile of nothing.  Disappointing.  **¾

This is for the vacated championship due to Ogawa contracting COVID, which is a worrying wrinkle.  It seems extreme to strip STINGER of the belts if the gap would only be a period of self-isolation, but without further information we’ll have to take it on face value and the result seems to suggest they’ve decided to lean into a story.

STINGER feels like a faction that is wobbling a little, with tensions rippling quietly in the background, and a win for Yoshioka and Susumu is certainly a statement.  It wasn’t easy, however, with Kotoge and Ohara owning the ring with speed and precision.  Comebacks from the STINGER team were quickly snuffed out and it felt like dominant victory was around the corner.

What the STINGER team were able to do, however, was scrape.  As the match entered the third act, it became apparent that the Regulars didn’t need to win as much as beat the Stinger team.  Once the submissions were locked in, and fatigue became a factor, it was the gutsier team that won.

The belts stay with STINGER, and leaves me excited to see how the grumpy Ogawa takes the news… ***½

I  love grappling.  I love wrestling that feels legitimate, rooted in sports and requiring genuine skill.  Whether it’s presented as a feeling-out process or a scramble for submission, it’s the kind of wrestling I really respect. Sakuraba certainly has this pedigree behind him, but he’s dancing on a strange line at the moment.  In this match, he was both interminably boring in his early grappling and exciting in his shirt-ripping war with Marufuji towards the end.  NOAH seems to hide behind the sacred cow sometimes, and while Saku is not as egregious as Muta, the prospect of Saku working his way up the card doesn’t fill me with joy. A mid-card spot is perfect for him, and taking the fall here seems to indicate that’s where NOAH sees him too.

Suguira, on the other hand, has no doubt around him.  His storm towards Tanaka was age-defying for both men and it was his control over Marufuji that felt the most authentic.  When he faced Tanaka, it was a constant dare to see who would show their age first.  Neither did, and it was a thrilling mix of strikes and suplexes.

Saku’s red-stained back indicated the effort here, and this was a solid tag match. ***½

During his last reign, Kenoh defeated Funaki in a very MMA-esque match that most agreed was stunningly average.  However, that match’s brevity combined with the stoic character of both these men added an undeniable excitement to this.  Kenou is a juxtaposition of wild seriousness, intimidating his opponents with his dedication to hard strikes and mental warfare.  Funaki, however, is a monument.  He’s seen everything, and his eyes don’t seem to recognize anything other than the competition immediately in front of him.  He doesn’t seem to go beyond the next hold or the next strike.

As expected, Funaki controlled the ground game early in the match.  He grips the arm with purpose, constantly hinting that a more dangerous move is a heartbeat away.  This very quickly turned into reality, because a choke came out of nowhere and Kenoh was tapping like his life depended on it.

As if to compound the shock, Funaki decided to abandon M’s Alliance to join Kongo, the best faction in wrestling.  Funaki shaking the hands of every Kongo member was a series of wonderful moments, where men looked into each other’s eyes with a mixture of respect and attempted intimidation.

The post-match promo told a great story, even though I couldn’t understand a word being said.  The shot of Funaki’s backstage speech kept Nakajima’s face hovering perfectly in the background.  He looked like a confused man, weighing up and considering power dynamics in his own faction.

As great as the angle was, I can’t help but feel a little disappointed by the match.  I understand why the win had to be a snap, because the top of Kongo relies on the tension between it’s stars.  It couldn’t have been definitive or that would have been destroyed. This was, however, the match that dragged me out of bed early on a Saturday and it would have been nice to have a little longer with it. NR

NOAH is certainly moving pieces around.  A great show on January 1st has led to some small yet potentially significant movements through the rest of the month, and it feels like we’re waiting to see where all these threads will lead us.  There’s an intangible to NOAH at the moment, boosted by their fantastic 2021.  This might have been a series of three-star specials, but it felt like it was moving forward as the promotion itself moves upwards. 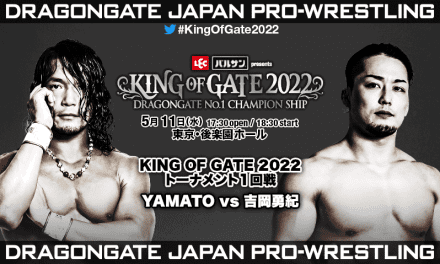 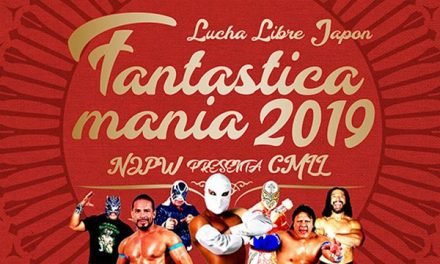