This card was decimated by a COVID outbreak, the kind of destruction that feels fatiguing at this point.  Last year, or even a few months ago, I would have devoured the card changes and analyzed the movements.  At this point, as we are all being told to just get on with it, I guess I’ll just move on.  I’ll plod through with life being slightly less full than it was before while accepting this is just the way it is.

There are still glimmers of hope, especially when it comes to the ever sailing ark of NOAH.  They undoubtedly won the war at Wrestle Kingdom Night 3, even if the results say they lost the battle.  The connection highlighted a promotion that feels like they’re on the way up, and this was demonstrated perfectly by putting them next to a promotion that feels on the precipice of decline.  For those who find the House of Torture rather too real to be kayfabe, NOAH is scratching that puro itch and this feels like a great time to jump on board the ark.

The card may have changed, but the tractors still went out.  Was it a bumper crop of peaches or potatoes?  Let’s find out!

The brilliant Mark Pickering and Stuart Fulton told us how cohesive the Kongoh junior team are, which was a subtle nod to the movements later in the show.  More importantly, it was a clear indication that they are informed of at least some of the storylines in motion.  It’s annoying that that is even notable, but this is a positive nonetheless.

It felt like Kongo were outsmarted by their grimy opponents at every opportunity.  A hot tag to Haoh led to dodges and dominance from the opposition, and nothing ever seemed to really click for Kongoh for very long.  It’s surprising how rarely we see this kind of story in professional wrestling.  Unit disagreements seem to be heightened to the point of ridiculousness, but the story being told here was simple.  Nioh and Haoh argued about who was at fault for the loss.  Simple, effective and engaging.  The match was fine, but it was all about the implications.  **3/4

There’s a lot to be said for a traditional tag match.  I love innovation as much as anyone, but there’s a reason why most tag matches are based around beating someone down until they get the hot tag.  Of course, tropes often lead to laziness but that was not the case here.

The recently defeated junior champion HAYATA seemed to be taking all of his frustration out on Kotoge’s arm, twisting and turning the limb into unnatural angles.  The hot tag to Ohara came, and it was good, but STINGER were sneaky and dominant throughout.  Ohara and Kotoge managed speedy bursts of power, but it was the STINGER team who were more comfortable in control.

Unsurprisingly then, it was Kotoge who got the pin and concluded an entertaining match. ***

Harada paraded his newly regained Junior championship belt around like a proud new father, which is understandable considering how much they are pushing HAYATA’s reign.  There are some issues in STINGER around the championship, and adding Yoshioka back into the mix made things interesting.

This could have very easily been presented as a dominant outing for the champion but Yoshioka, bolstered by the confidence of a recent victory over Harada, didn’t let that happen.  It allowed Harada to be a wonderful, emotive babyface.  There were little pauses where he would shoot a puzzling look at his opponent, or a moment of relief after a big rolling elbow which really built the idea of the valiant champion.  It felt like a good, strong win for Harada and a fine match. ***1/4

The newly invigorated Haoh was a whirlwind of strikes and power, but it wasn’t long before the Kongo team started their lesson in respect.  They wrestled with a violence befitting their damaged pride, but this was obviously the Haoh show.

A hot tag from Harada to Haoh was wonderful, with a pause for a determined look and a million words spoken in a quick glance.  The two opposing ethos were established, and they told that story brilliantly in simple yet effective ways.  The pure blue eyes would battle off two challengers at once, struggle for the hot tags and bravely push through any fatigue.

Harada wins his second match of the night with the big German, and the slugging between Haoh and Nioh said this isn’t over. ***½

So there was this big pole.  I’m told it was for crowd control.  This meant that we were treated to some King Tany and Kendo Kashin brawling to start us off.  They banished themselves to the shadow realm, and we were given the classic pairing of Shiozaki and Suguira to start us off.  Unfortunately, we didn’t get to see much of it because Kendo Kashin and King Tany returned with a half-hearted brawl at the commentary table.

This was a match of moments.  There were plenty of cool images – Fujiita resisting Shiozaki’s chops while he had Yone in a half crab in particular – but nothing to get too excited about. Sugiura and  Shiozaki returned with some great offense, notably a brilliant top rope brainbuster, but there was far too little to sink your teeth into.  Fujita dropping old Maybach on his head put us out of our misery and we were able to move on.  **¼

There’s a paradox to Muto.  The mere mention of his name in modern NOAH leads to a cyclone of arguments that are interlinked in a bizarre, boring way.  I liked Muto a lot, and I have a lot of reverence for his achievements.  That does not necessarily mean I think he should be the defending champion in a semi-main event.  These hard-hitting matches do not need to be stunted by a 59-year-old who cannot keep up, no matter his personal history.

The paradox went deeper when the match started.  Muta was kept on the apron, leaving Soya to power Marufuji around and Kenoh to exchange dynamic strikes.  It made sense to keep Muto away from the cardio, but there’s always the inevitability of the lukewarm tag to the man with no knees.  The issues were perfectly illustrated by Soya’s spiking DDT that was rendered blunt by Muto’s inability to hit the mat effectively.

Muto embarasses his way to a victory with a Frankensteiner that barely disguised the workings of the arteries and muscles underneath, and it brought up another odd Muto paradox.  Win or lose, it doesn’t really matter until he leaves.  They are determined that he will dance around the top of the card, and for me to think losing the tag belts would lead to respite is probably naive.

A match with good moments, but not much to watch overall.  ***¼

While the build to this may indicate a fairly routine defense for Nakajima, it is the history between these two men that elevates this.  Memories of the cage match are still fresh, especially the lovely images of the defeated warrior Nakajima having his hair removed by his rival and teammate Kenoh.  This defeat diffused into drive, and a changed Nakajima blasted through the N1 and to championship glory.  A rubber victory over Kitamiya would be a great symbolic move forward, and sometimes a subtle build works just as well.

A slow start from Kitamiya seemed to speak directly to the personal history between the two wrestlers.  He was methodical, dominating the grappling, resisting the strikes and seemingly closed the door on Nakajima at every opportunity.  Nakajima, however, was his sneaky best and every time Kitamiya looked settled and ready to gain speed, he would worm his way out of trouble.

It was fifteen minutes into the match before we saw the full force of Nakajima’s strikes, and in a wonderful play with pro-wrestling structure, Kitamiya resisted and grabbed control for an extra few minutes.

The big strikes came, but it was Kitamiya’s match with his hatred fueling no sold suplexes and resisted strikes.  A crawling, battered Nakajima was a great image and the late-game Nakajima had a drive that was missing from early in the match.  The story they told was of a Nakajima that thought he could go through the motions, deal out some signature offense and call it a day.  Kitamiya played the brick wall excellently, and Nakajima let desperation drip into his game at the perfect pace.It was a massive brainbuster that retained the title, but the dominant win Nakajima wanted eluded him.

Nakajima tossed Kitamiya out of the ring at the end, but it felt more like an ellipsis than an exclamation mark.

This felt like a match that makes star ratings irrelevant to a certain extent.  A ***¾ rating is probably fair, a touch below great, but there was lots of story to dig into and I was entertained throughout.

While hardly a classic show, it feels comforting that NOAH seems to be giving Najakima solid victories growing straight out of history.  The main event was very good, and certainly an interesting victory for Nakajima.  The story and the work never met at a particularly high point, but the story was good enough to overcome that. 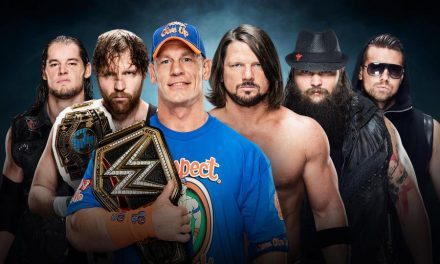 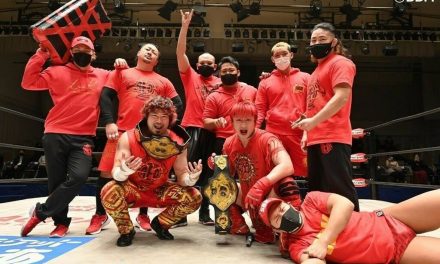 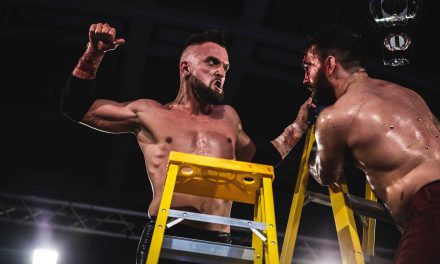