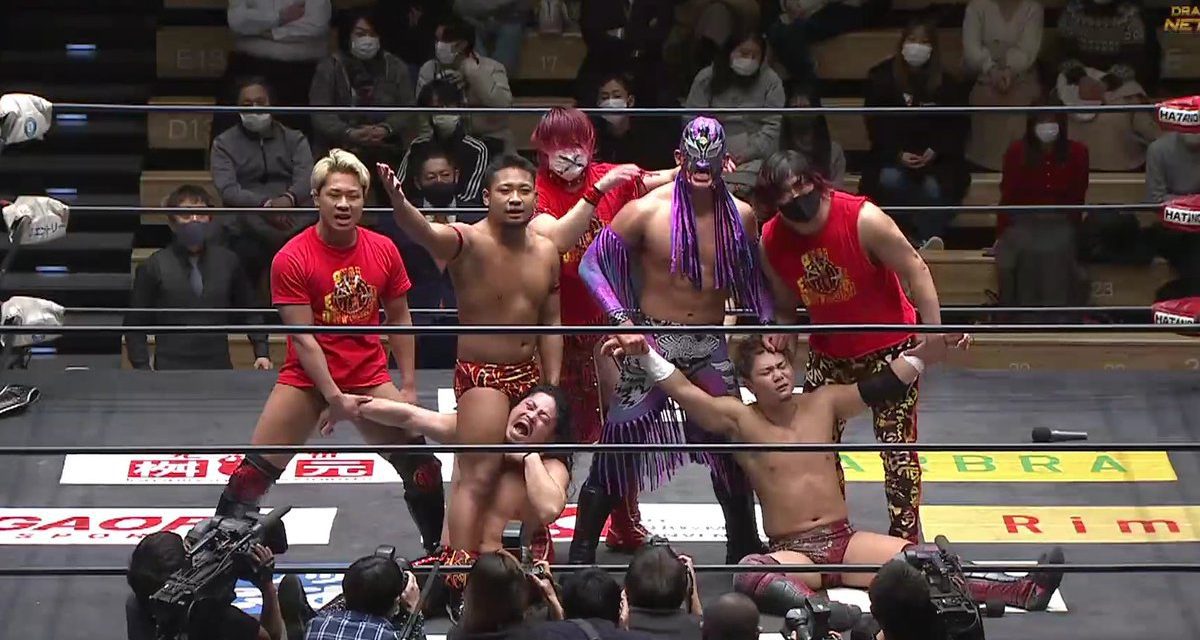 Jacky “Funky” Kamei has found a sweet spot in this company. I’ve been reviewing Dragongate for this website for six and a half years now, and for a long time, I thought I had exhausted every possible way to describe a basic Dragongate opener. The matches are never bad, but they’re not all that spectacular, either. That is until JFK came along. Kamei is such a mighty spark plug in this spot, routinely pulling effort out of big stars who have otherwise graduated beyond exuding effort in such a meaningless spot.

He had an excellent chop battle with YAMATO, at one point even out-chopping the five-time Dream Gate Champion and forcing YAMATO to re-evaluate his gameplan. He and Ben-K worked incredibly well together, as well, blending the ungodly power of Ben-K with the incredible quickness of JFK to create an engaging cat-and-mouse game throughout the entire match. All of these JFK matches mean nothing at the moment, but we are in the midst of watching someone who will have a very long and prosperous career as the heart of this company.

YAMATO pinned Horiguchi with a Galleria to pick up the win. ***1/4

I might end up breaking something in my apartment out of excitement when Takumi Hayakawa finally wins a match. I don’t know when it will be or who it will be against, but the 5’1”, Yamanashi-born rookie is going to catch someone in his headlock takeover flash pin and he’s going to send the Dragongate audience into a frenzy. Unfortunately, tonight was not his night. For the second time in his young career, he fell victim to Shimizu and his Big Boss Press in less than a minute. This was incredible while it lasted. NR

The Don of Okinawa, Gurukun Mask, showed up in Korakuen Hall! For those that don’t know, Gurukun runs the Okinawa-based indie Ryukyu Dragon Pro, which has an ongoing working relationship with Dragongate.

Gurukun Mask, La Estrella, and Ultimo Dragon seem like the type of trio that would’ve nearly bankrupt Chikara on a King of Trios weekend. While the match wasn’t anything special, I enjoyed seeing those three team with one another. I actually thought Estrella was the weakest link of that team, having another night that was shaky-at-best. It speaks to the power of Diamante. When Estrella was attached at his hip for six months, I never worried about Estrella. Now that he’s back wrestling everyone else on the roster, he continues to look so-so.

Gurukun pinned Gamma with a Gurukun Leg Roll Clutch for the win. Get into it. **3/4

I did not enjoy this match.

Fuda came into the promotion at the end of November and immediately showed off his kickboxing background in his thrilling debut match against Masaaki Mochizuki. At no point in that match did Mochizuki look like he was going to succumb to Fuda and his kicks, but Mochizuki made the rookie look like an active threat. In his first full month on the roster, I thought Fuda did a great job of showing why he’s a valuable addition to the future of this company. He’s not a well-rounded wrestler at this point, as even Genki Horiguchi, who was on English commentary, noted that this “wasn’t a very Dragongate-style” match. Fuda has only had his type of match so far, but that type of match is usually very good.

Unfortunately, Okuda, who oddly enough was Fuda’s main inspiration for entering the pro wrestling field, ate him up in this match. It didn’t seem like Okuda was in the mood to give this kid anything. This match just didn’t fit the Dragongate spirit. There was no heart. This was a cold, bitter match that would’ve come across better in All Japan or NOAH.

To make matters worse, Okuda choked out Fuda for the finish. As in, Fuda started turning blue. Okuda locked on his signature sleeper hold that normally leads to a penalty kick and the pin, but the penalty kick never happened. Okuda wrenched in this choke and Fuda went out immediately. Referee Yagi did a poor job of officiating, as Fuda’s arm dropped three times and Yagi still refused to call for the bell. Okuda released the hold and started to hit the ropes, but thought better of it and just pinned an unconscious Fuda. **1/4

After the match, Fuda regained consciousness and after a sign of respect between him and Okuda, was carried to the back by Ishin Iihashi, visibly upset by what had occurred. Despite the disaster that this was, Dragongate could’ve stumbled into gold with Fuda being embarrassed so badly by his main inspiration. Of course, they can also just pretend this never happened, and I wouldn’t fault them for that either.

More power to Dragongate for thinking KAI vs. Takashi Yoshida is the direction to go with the Dream Gate belt. I don’t get how you could look at this roster and think that is the move, but they apparently do. If they’re going to be wrestling each other going forward, they need to up their game, because while I love the way KAI is carrying himself as the new Dream Gate Champion, this match was dreadfully boring. There was no juice to it whatsoever. Yoshida caught KAI with an inside cradle for the pin so THE FEUD MUST CONTINUE~! **1/2

After the match, Naruki Doi once again attempted to recruit Kota Minoura into the unit that is unofficially known as Naruki Doi’s International House of Hot boys. Doi offered Minoura a chance to team with him on the 1/13 Korakuen Hall show, but Minoura turned him down yet again, noting that he had too much going on with the impending doom of Masquerade.

Whereas Okuda vs. Fuda felt mean-spirited, this incarnation of the veterans vs. the FUTURE generation was exactly what this show needed. It’s hard to put into words just how good Don Fujii is. Every once in awhile, he gets something to do and he always owns it. He is going to turn Shoya Sato, the 29-year-old judo standout, into a formidable player sooner rather than later. They’ve been paired off with one another for a month now, and each time, Sato comes a little closer to putting down the veteran. Fujii got caught in the cross armbreaker, but used his 20+ year career to his advantage, flipping Sato over and pinning him with Fujii’s rarely used Gedo Clutch.

Takuma Fujiwara continues to jump off the screen. His bumps are hellacious. It’s not like this group of veterans need any help making their offense look great, but Fujiwara takes their offense to the next level. He violently flew across the ring after a Shuji Kondo shoulder block. His offense, while nowhere near being fully developed, is already incredibly interesting. He moves around the ring like a junior heavyweight, but once his body fills out and he’s able to bulk up, he’ll have the perfect body type to succeed in this promotion.

The intensity that was on display from the entrances through the post-match when Fujii jumped the rookies from behind, only to have the rookies chase him down and stomp a mudhole in him in the entryway, was all beautiful. This is well worth your time. ***3/4

The broken trio of Lee, Minoura, and Skywalker shocked the world in December by winning the Triangle Gate belts from this RED trio in an impromptu title match, but failed to successfully make their first defense in a rematch.

Starting with this match, the next 45 minutes of this show felt like one long, beautiful angle. It was the culmination of multiple stories, starting with the transformation of VerserK to Antias in January 2018. After two years of total domination, the heel unit, then led by Shingo Takagi, was passed down to the new generation of T-Hawk, El Lindaman, and Eita. T-Hawk, at the time, was a fledgling main eventer, who despite multiple opportunities to prove himself, was still not reliable on the biggest stages. Lindaman, as brilliant as he can be, was at a low point and looked like he was plateauing in the midcard. Then there was Eita, an unproven commodity who had failed to capitalize on his white-hot run in the summer of 2016. The future of Dragongate was being passed the baton and it didn’t look like any of them were ready for it.

Five months later, T-Hawk and Lindaman would split from the company, making an already-struggling unit totally meaningless. Eita trudged along as their leader throughout the summer, but it seemed Dragongate had hit an all-time low with their lead heel unit.

In an effort to make it his own and remove himself from the stench that was left by the OWE split earlier that year, Eita rebranded Antias in September 2018 and quickly recruited freelancer Kazma Sakamoto and returning Dragongate icon PAC to join his ranks. Almost overnight, the unit—now known as R.E.D.—felt like it had life. Even if I personally didn’t love Eita’s placement at the top of the card and his seemingly never-ending feud with Dragon Kid, I liked the direction the unit was headed, in particular when PAC was around.

Dragongate was at a tipping point in 2018 and the heel unit represented every problem that the promotion could be facing in the immediate future. The veterans involved were stale, but the youth weren’t ready for the challenge.

In 2022, I have no reservations about the future of this promotion.

The youth, which in this case we’ll recognize as HYO, SB KENTo, Shun Skywalker, and Hip Hop Kikuta, are all ready for this spot. The match, which was primarily wrestled by HYO and Skywalker due to their partners refusing to tag in because of their prior antics, concluded with Minoura whacking Skywalker across the face with the RED box. Of course, this wasn’t to signal a Minoura heel turn. It was comeuppance for the month of torture that Skywalker had put the rest of Masquerade through. ***1/2

Skywalker demanded an apology from Minoura, but Minoura refused. Skywalker’s performance here was enthralling. He’s now in the highest pantheon of wrestling psychopaths. He’s every bad stereotype of a deranged significant other.

Shun Skywalker is the living embodiment of gaslight, gatekeep, girlboss.

HYO was thrilled, but Eita and Ishida refused to get excited about their title win. This led to a confrontation in the ring with the members of RED with Ishida claiming that HYO was now out of the unit, but at that moment, the rest of the heels jumped Ishida and Eita. Skywalker joined the fray, turning heel and proudly aligning himself with HYO and RED.

The heels attempted to conclude their show-closing promo, but GM Ryo Saito noted that SB KENTo, the current Open the Brave Gate Champion, had yet to wrestle. This was the cue for Dragon Dia’s theme music, bringing out the newly-unmasked man for the first time in a month.

SB KENTo failed in his fifth defense of the Brave Gate belt.

This was 90 seconds and it reinforced that Dragongate is better than the things you like. Dragon Dia came out with a skateboard, prompting Jae to yell, “do a kickflip!”, which makes Dragongate’s foray into English commentary worth it for the rest of eternity.

Dia and SBK worked a blazing sprint. In an effort to save his closest compadre, HYO attempted to distract Dia, but that brought out Dia Inferno, who blasted HYO with powder and then unmasked to once again reveal himself as Yuki Yoshioka. Dragon Dia hit a Reptilian Rana and scored the pinfall. Dia and Yoshioka embraced to close the show. NR

The last hour of this show was one of the most satisfying hours of wrestling I’ve ever consumed. This was years of story being paid off in a compelling, satisfying, and shocking way. The undercard was largely uneventful, but everything from the veterans vs. rookies tag onwards is essential viewing.