This week on Wrestling Omakase we take our third completely randomized look back at shows that took place inside the Big Egg, the Tokyo Dome!

John is joined by returning guest & VOW contributor Jeri Evagood (@TheJerriest_Jer) for her record TENTH appearance of the year! Wow! John crowns her MVP (Most Valuable Podcaster) before they get into what they’ve both been up to, including Christmas, worrying about Omicron cancelling their plans, and a whole lot more. Plus there’s some discussion of Jeri’s semi-recent Atlantic City trip, and John’s pre-emptive year end thoughts ahead of next week’s 2021 Year End Awards episode. Once that’s out of the way they get into their topic, which is six randomly selected matches from six randomly selected Tokyo Dome shows (all Dome shows were eligible, not just 1/4 and not just NJPW). As always, stop reading here if you want to be surprised, but if you’d like to know beforehand here they are below:

Topics that come up along the way include: since we did get all NJPW this time John gives some background on the promotion’s very turbulent history as we go through the years here, Chono’s bizarre clean-cut years, Muta nearly commits a random murder, a little background on both Heisei Ishingun and Yatsu’s very strange career journey to this point, a boring match with not much to talk about, how the hell did we get Savage vs. Tenzan again, Savage at least puts in some effort this time, Takayama on the verge of breaking out as a megastar, Yuji Nagata FUCKING OWNS, Minoru Tanaka’s bizarre videogame gimmick, EVIL HEAT, Love & Energy forever, a damn great match to close things out, and much more! 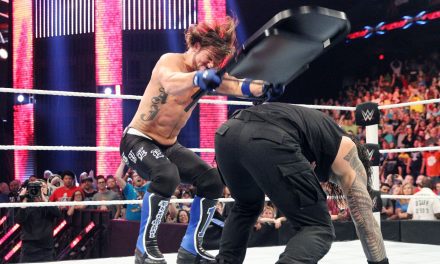 Extreme Rules, Best of the Super Juniors, Your Questions & more!

Everything Elite 134: Fight for the Fallen 2021, Jericho vs Gage, CM Punk Tease, Dark Order vs Elite!

Wrestling Omakase #5: All About Joshi