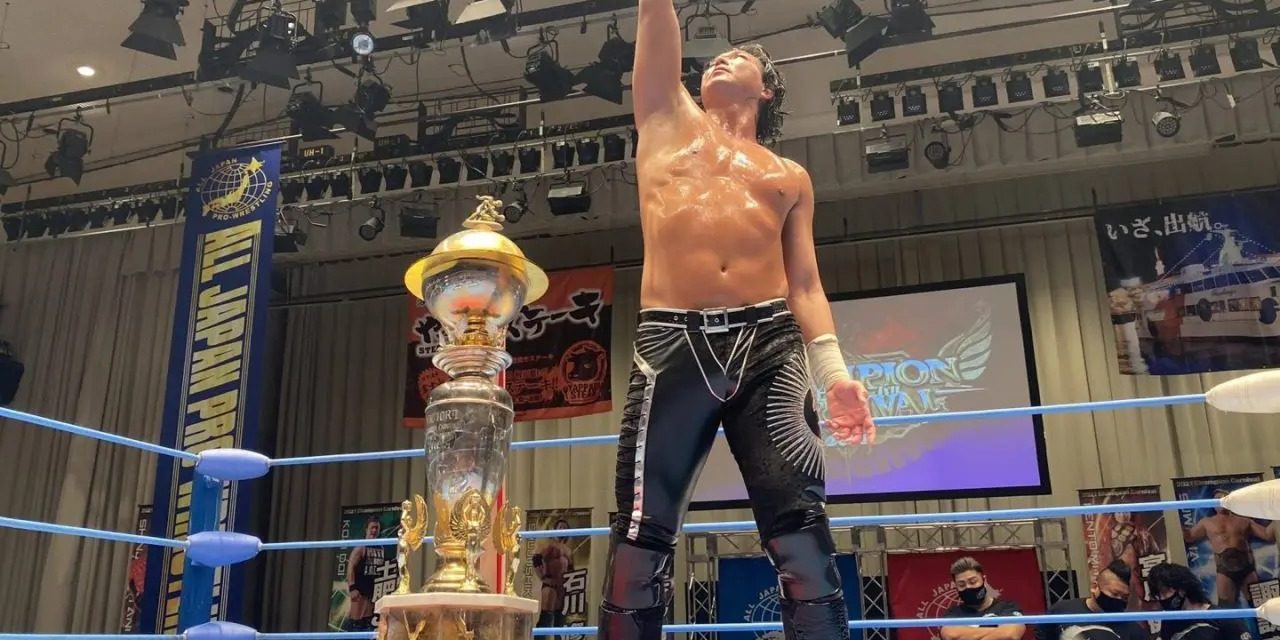 All Japan’s 2021 started off on a strong note compared to the second half of 2020. But as the year went on, events both inside and outside of the ring began to take their toll. While pandemic attendance numbers can’t tell you a whole lot, the buzz among the international fanbase in the company has plummeted to where it is a running joke in some quarters.

Instead of writing one long essay where I end up going on long rants and end up writing 7,000 words, I will break up this year into looking at what was good, bad, and for lack of a better word, mid. I’ll also finish off with a few things to look out for in 2022.

He always had a ton of potential and he made some strides in 2020, but this past year, Aoyagi has really kicked it into high gear. He started off the year winning the World Tag Team Championship with Kento Miyahara by forcing a referee stoppage on Suwama, then the next day on January 3, faced Suwama for the Triple Crown in another great match. For my money, he was the best overall performer in the company in 2021. Not only is his work inside the ring excellent, he has also upped his charisma, in part due to teaming with Miyahara. If All Japan wants to move past its current woes, he should be winning the Triple Crown sooner rather than later.

For a while, I thought Aoyagi, who celebrates the third anniversary of his debut on January 2, was the weakest of the young talents that debuted in late 2018 and early 2019. Then all of a sudden out of nowhere, he became a great high flyer. There is no question now that he’s being groomed to be the next Jr. ace, and I am confident that he will be able to carry the division in the coming years. Having just turned 22 this month, he has the potential to really make something of the Jrs. in the company for many years to come.

Some will quibble with this designation. I get the sentiment. Despite a hot debut in the company with Enfants Terrible, Ashino ended up being just another mid-carder. But the break-up of Enfants gave him some direction and his new tag team with Suwama, Runaway SUPLEX has been great. It’s clear that they have plans for him (he actually has had some big wins in tournaments), and despite the twists and turns in his booking, he remains one of the three best workers in the company. On January 2, I expect it will be announced that he has signed a contract with the company and his push will only get bigger. Like the elder Aoyagi, he really should be winning the Triple Crown sooner rather than later, and while I think that will happen, there is always a chance they think he’s too small to be the company’s top champion.

That’s right folks, the Saito Brother Respect Army is taking the world by storm. Seriously, I get why casual viewers may think that they are awkward in the ring. They certainly have a way to go in that department. But there is clearly something there. They’ve got the size and can throw guys around. They are very much a throwback to an earlier era of ex-Sumos getting into pro wrestling. Due to their size and age (they just turned 35), they have been earmarked for a big push and already have a couple wins against lower-card guys. I’m looking forward to their U.S. experience in the new year. If they can show some improvement while there, they are going to get a mega push upon their return.

The good Italian boy made some big moves this year. He won the Jr. Battle of Glory and then had a short reign as the PWF World Jr. Heavyweight Champion. He’s come a long way in the ring since his All Japan debut in February 2019, and has developed a fanbase. He’s been tearing it up on the European indie scene as of late. While I thought he would be returning to Japan in early 2022, he’s now taking European bookings in the new year, with the Omicron surge probably playing a role in that. Let’s hope things get better soon so we can see him in All Japan again soon.

All Japan, despite all the turmoil, keeps turning out graduates from its Dojo or finding hidden gems on the indies to become regulars like Ryuki Honda and Rising HAYATO. Hokuto Omori and Dan Tamura have emerged as wrestlers with a bright future. And though he’s sidelined with a torn ACL for now, Ryoma Tsukamoto showed a ton of potential. Ryo Inoue will be making his debut on January 2. In some late-breaking news just before I started writing this, Tokyo Sports announced that Suwama has scouted from his alma mater Chuo University, Yuma Anzai. Anzai stands 6’1” and 229 lbs. He has a background in amateur wrestling, karate, baseball and soccer. He will be reporting to the All Japan Dojo in the Spring. He has top star potential written all over him.

I had been hoping for STRONGHEARTS to pop up in All Japan since they left Dragongate. With the Dragongate relationship now seemingly over, it cleared the way for them to come in this past year. While CIMA’s PWF Jr. title reign was divisive (I liked it), because, well it’s CIMA, T-Hawk and El Lindaman have been tremendous. With the GLEAT relationship solidly in place, I expect to see some more great stuff from them next year.

While it’s generally believed that Suwama and Shuji Ishikawa have a hand in the booking, some of the worst stuff this year had TAJIRI’s fingerprints all over it. It’s also been reported that he had a role in the departure of Yusuke Okada at the end of 2019 and Koji Iwamoto this year. Then there’s stuff like putting the Jr. title on Super Crazy. The amount of power he’s amassed is puzzling given he ran two failed promotions in the past – SMASH and Wrestling New Classic. There are the pieces in All Japan to make the company something great, but TAJIRI having a role in the booking is a major reason why that’s not happening. While I don’t have as many topics under The Bad as I do The Good, the booking truly outweighs most of the positives in the company right now. There really feels like there is no direction, and for every step forward, there’s two steps back.

First, it was Zeus, then in December, we learned that Koji Iwamoto and Naoya Nomura would be leaving the company. While all of these hurt, in the cases of Zeus and Iwamoto, they had reached their ceilings in the company. Iwamoto was stale as the Jr. ace. At least Zeus will be making occasional appearances moving forward as he re-launches Osaka Pro. Nomura hurts the most. He had future ace potential, and while he hadn’t wrestled in almost two years, he showed in his farewell match against Yuma Aoyagi that he had barely missed a step. There are reports that Nomura is still having issues with moving his hands due to his injury. I guess we will find out how true that is early next year if he pops up in DDT or NOAH or not. If this is the end of his career, it’s a very sad moment.

There’s little proof his Triple Crown reign has been a bomb, but there’s zero evidence it’s lighting the world on fire. I was warmer towards it at first, but he hasn’t grown into the role over the ensuing months. The way the reign started off with the title being vacating due to Suwama catching COVID-19 didn’t help to be fair, but Lee hasn’t closed the gap since then. Lee tries this stoic heel persona, but it looks like he’s just disinterested. He has shown some flashes of intensity during the 60 minute draw with Miyahara but it has been inconsistent. His matches have been good but not at the level that Miyahara has set in recent years. While I don’t think it’s time to pull the plug on him as a main eventer, I think it’s time to bring this Triple Crown run to an end soon, and see if he can continue to develop as a character.

This gets a mid-ranking because there is some great talent there that the company has developed and brought in as freelancers. It continues to get attention like doing stand-alone Jr. Battle of Glory tournament shows. But the booking has been all over the place with the title being a hot potato (it’s changed hands six times in 2021). If we get some title stability and an Atsuki Aoyagi run with it, I will be bumping up the division to good next year.

He’s still one of the best wrestlers in the world, but All Japan has struggled at times finding stuff for him to do when he’s not Triple Crown champion. He did have a good run with Yuma Aoyagi as the World Tag Team Champions though. He needs to get a run with the Triple Crown in 2022.

While it was said at first there was no formal agreement, Zeus has subsequently said there is one, confirming my suspicions. This can only help both companies draw in Osaka and will add some depth to All Japan cards.

It has already been announced that there will be a joint AJPW & NJPW show on April 16 to celebrate Korakuen Hall’s 60th anniversary. There is no word as of yet if that means there will be offer matches from each promotion or interpromotional matches. I’ve thought that given the way the third night of Wrestle Kingdom has been booked, it doesn’t offer that much to NOAH as they have been on an upswing. But in the case of All Japan, any interpromotional stuff can only benefit them given their current situation. I would be less cautious than New Japan and NOAH have been with the booking. They should be daring and actually do stuff like Kento Miyahara vs. Hiroshi Tanahashi.

This one came out of nowhere, with TAJIRI popping up on one of their shows and winning the World Middleweight title. Whatever one may think of MLW, I believe that it is a net positive for All Japan. The Saito Brothers will be working MLW on their U.S. excursion. If and when travel opens up some more, there is definitely some talent like Calvin Tankman and Alex Kane that would do very well in All Japan. And perhaps we will finally get a Kento Miyahara appearance in the U.S.

Stronghearts have been a great addition, but there is other talent in GLEAT that would do well by making appearances in All Japan. Kaz Hayashi has started to work a few shows (his first appearances in All Japan since the Wrestle-1 split) and now Yu Iizuka has popped up and has dates in the company into 2022. I would like to see guys like Takanori Ito, Soma Watanabe, Ryuichi Kawakami and Hayato Tamura make appearances. This relationship isn’t a one-way street. Atsuki Aoyagi has been a regular in GLEAT and has been gaining valuable experience there. Let’s hope the relationship grows closer in 2022.

What Motivates Top Executives in WWE?