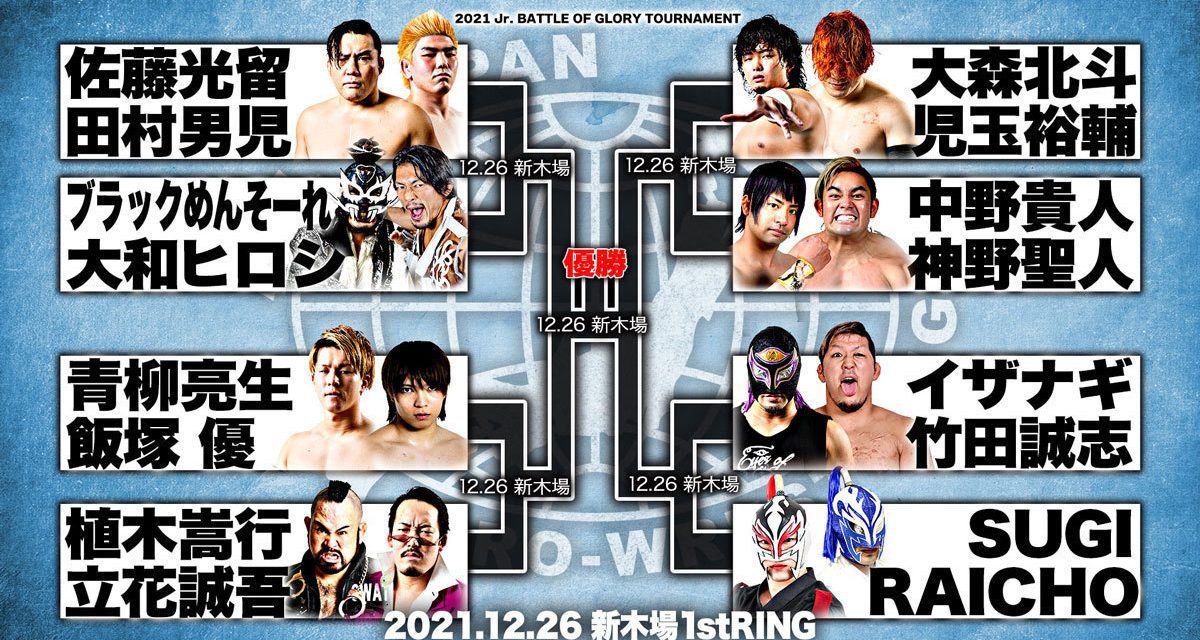 It’s always nice to see Yamato in All Japan. He and Sato have a history, dating all the way back to the days Keiji Muto ran the company. They did the strike me as hard as you can and I’ll do the same exchange. Tamura and Menso~re had a nice little closing stretch before Tamura got the tap out win with the Dan Lock. This was a perfectly fine match, though I thought the Sato and Yamato stuff was a lot of fun. After the match, Yamato attacked Sato, so hopefully, that means something for later? ***

This match see-sawed at first between good stuff and comedy. Tachibana and Ueki had a bit of a communication breakdown and they each bodyslammed another on top of a downed Iizuka. Ueki can be a good worker, but he relies on comedy when he’s not in a death match. Things eventually picked up and Aoyagi and Tachibana did some good stuff. Ueki did his dumb gun spot, but Aoyagi and Iizuka outsmarted them and Iizuka knocked Ueki out of the ring which allowed Aoyagi to pin Tachibana with the Firebird Splash. This could have been really damn good without the comedy. ***

Nakano and Kamino (not the planet from Star Wars) are from Pro Wrestling BASARA. Omori seems to be evolving how he plays heel, and I mean that in a good way. He’s doing more stuff like hair pulling and eye rakes while keeping up the intensity but not doing stupid stuff with chairs and other stuff at ringside. Kamino played the face in peril and got worked over by Total Eclipse. This was the first time I’ve ever seen Kamino, and I was impressed with the fire he has. Team BASARA made a comeback for a while and Nakano and Omori had a really good closing sequence with some near falls. Omori pinned Nakano with the Muso Issen. This was good. I would like to see these BASARA guys back in All Japan. And it was nice to see Total Eclipse play heels without the bullshit. Omori looked like a future star here when he was just keeping it to wrestling. ***¼

Takeda pops up in All Japan once or twice a year, often for this tournament. SUGI and Takeda wrestled in the opening minutes. It was fine but nothing special. SUGI got worked over a lot but then SUGI and RAICHO made a comeback. RAICHO had Izanagi up for a Powerbomb and SUGI came off the top rope into a Shiranui for the win. That was cool as hell. But the rest of the match didn’t really come together in any interesting way. Izanagi and Takeda looked uninterested. RAICHO tried but he’s not that great generally. SUGI did some high spots but is also obviously saving himself because he has to wrestle in more than one match on this show. **¾

This started off the only way it should have. With Iizuka and Sato doing some shoot style. There were other great Iizuka and Sato exchanges throughout the match. Aoyagi and Tamura looked good here as well. Aoyagi looked to have Tamura down for the count and went for the Firebird Splash, but Sato kicked him while on the top rope and Tamura hit a big Powerbomb and applied the Dan Lock for the win. That was not the result I was expecting. This was really good. You had the shoot style and a good closing stretch from Aoyagi and Tamura. ***½

Total Eclipse ambushed the masked men at the beginning of the match. SUGI and RAICHO fought back and took control for a while. They looked to have the win with the Powerbomb-Shiranui combo again but Kodama pushed SUGI off the top rope and pinned RAICHO with a Huricanrana. This was a nice little sprint. ***¼

This started with a fair amount of mat work between Kodama and Sato. Kodama usually doesn’t do mat work, so I figured that meant they could be going long in the match. The match spilled out of the ring and Tamura bodyslammed Omori on the entrance ramp. Evolution went to work on Omori’s back after that. Omori finally turned the tables by punching Sato in the leg during a kick and hitting a suplex then made a tag to Kodama. But Sato still got back the advantage and went after Kodama’s left arm. Omori and Tamura had a great sequence down the stretch. Omori survived a Doomsday Device shoulder block. Tamura had the Dan Lock on Omori but Kodama made the save after finally making it back after being laid out for a while. Omori and Tamura had a great closing stretch with a lot of kick outs. Omori hit a Dragon Suplex which I’ve never seen him use before but Tamura kicked out at 2.9. Omori then pinned Tamura with the Muso Issen. Last year’s winners of the tournament came up short here.

A great performance from those two, but especially Omori. He was basically babyfaced here. Omori survived getting his back worked over, and then a lot of spots in holds where it looked like he might tap out. Definitely the best performance I’ve ever seen from him. There was zero cheating here either, and I’m glad they managed to go the whole tournament without doing it. It definitely feels like Omori is going to be getting a push in 2022. There were a couple of sloppy spots throughout, but they still deserve credit here as it certainly didn’t feel like this went nearly 30 minutes. ***¾

There was nothing bad on this show, but nothing that you need to go out of your way to see either. This is an easy recommendation show to a devoted All Japan fan, but I’m not sure what others would get out of this other than the final which was a match that can stand on its own.

Say what you will about TAJIRI’s booking (and I have plenty to say), he is giving the Jr. division some spotlight and is pushing young talent. Let’s just hope that is done in a logical way, which has been the major issue even when things look like they’re heading in the right direction.