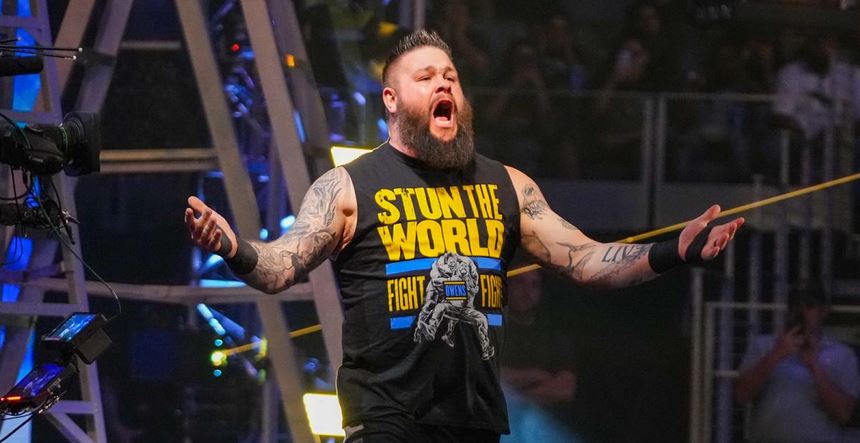 Kevin Owens re-signed with WWE, and I absolutely respect his decision.

In fact, I’m happy for him.

What’s that I hear? What do you say? How can I be happy for him? Why would I be happy? I agree, it doesn’t add up. I don’t like WWE, I actively speak out against the company! Why would I be here sitting happily on my couch knowing we are going to be stuck with Kevin Owens in WWE and not Kevin Steen on the independents tearing it up, or Kevin Owens in AEW living it up in a way we feel like he has failed to do so (no fault of his own) in WWE? How can I possibly be happy for him?

When you break it down, it’s not that hard to explain.

Because yes selfishly I wanted him to leave. I wanted him to go to AEW and reunite the Mount Rushmore of professional wrestling. I wanted him to spend some time on the independents and give us some matchups we otherwise expected we’d never get. A huge part of me wishes we were still going to get that, part of me is sad I won’t get it. I selfishly want him to let his contract run out and have a run elsewhere. I want to hear Unsettling Differences play again and the crowd goes apeshit as Kevin Fucking Steen makes an appearance. It’s what I wanted, it’s what I hoped for, it’s what I didn’t get. As the song goes “you can’t always get what you want.” Kevin Owens didn’t do what we wanted, he did what he felt he needed.

And you know what? That’s okay. Not only is it okay, but it’s also the right type of decision-making mindset to have. Something as wrestling fans we forget a lot of the time, it’s not always about us. Yes, when they perform in the ring, when they cut their promos, when they do their angles, in a lot of ways it’s about us. It’s about entertaining us, it’s about locking us into the point we tune everything else out. It’s about gripping and grabbing us and holding our attention as they perform their art that we constantly pick apart and critique and hold to a higher and higher standard. Wrestlers are constantly putting their bodies in more danger, pushing the boundaries of their promo abilities more often, and are always on their toes figuring out how to give us consistent ample content to satisfy our pro-wrestling cravings. They DO A LOT FOR US. Not that we owe them anything more than we already give. We are the customer, we are giving them our time, attention, and money. But that’s just it, when they perform their craft that is when they are giving us what they owe to us. When they are behind the scenes deciding their futures, their fates, their business decisions, their health? That is when they give to themselves and theirs what is owed, what is due, what is necessary. What we feel is necessary will always, and usually doesn’t, line up with their prerogatives.

We can not pretend to fully know what goes completely into Kevin Owens’ mind when making decisions unless of course, he chooses to share with us. He has shared some things. He’s made it clear he’s comfortable and happy in WWE, he’s made it clear he’s thinking about his family. You know what? I respect it. That should be good enough not for some of us, not for most of us, but for ALL OF US. You can be bummed about his decision, you can be unhappy about his decision, you can wish he made a different decision, IT IS HIS DECISION. He is an adult, it is his body and health (mental, physical, emotional), it is his bottom line and his bank account. No doubt he considered a lot of things. Maybe it was a no-brainer decision, maybe it was difficult, maybe there was no decision and he always knew what he was going to do.  When it came a time though, he signed with the WWE and I can’t be happier for him because I have no doubt he made what he thought was the best decision for him and his family. We could needlessly argue in circles whether or not it was, but that’s now irrelevant as the choice is made, and there’s nothing more to be done about it. He went against everything we wanted and did what he felt was needed, that was the right decision.

Will it pan out?

Time will tell on that, WWE’s track record has a lot to say on it, but in the end, it’s his decision to make, he made it, and I have better things to do than be needlessly angry over it. I’m disappointed, I wanted him to leave, as I said above I had my list of things I wanted to see Kevin do. You can’t always cater to the fans though, especially in these matters. Sometimes you break off a kit kat bar and offer a piece to someone, sometimes all the pieces are yours. His contract was probably a kit kat bar, had more than one piece to it, and he wasn’t breaking off any of it to give to us.

Inside and outside of the ring Kevin has given us a lot. I remember his days in the indies. I remember cheering for him as he put himself through misery after misery to entertain us. His matches and feud with El Generico are burned into my mind and I revisit those matches every so often. That feud is one of my favorite feuds of all time. He’s done a lot for us, but he’s also a family man. He’s always made it clear how much pride and love he has for his family. That’s one of my favorite things about him. I have no doubt any decision he made with them in mind, not just financial, but his health.  He wrestles a different style, a different setup, a different mentality in WWE than he would if he was on the indies or in AEW. Maybe that played a consideration? Maybe he thinks that he can’t do those styles anymore. Or maybe he knows he can STILL DO THAT but for his health, for his safety, for his family, it is best for him not to do so. That is just speculating, I don’t have full access to the thoughts and feelings of Kevin Owens, but I can’t help but think he thought of those things. I can’t help but feel the amount of time he’s put into the business and the amount of toll he has taken weighed heavily on him. I can go about my feelings, but in the end, I can only speculate to a certain degree, as speculating further becomes unhealthy and can lead to incorrect assumptions and information for others.

He has put in good work in WWE. At times it feels stymied, at times it feels lethargic (his booking not so much his effort) and it definitely leaves a feeling of unfulfillment for us long-time fans. We can totally wish he had chosen differently and gone elsewhere, but he hasn’t, and if that means I’ll continue to not watch his work as I have zero interest in WWE then so be it. Doesn’t mean I won’t wish him well, doesn’t mean I’m not glad he had options. That’s the thing folks, just because there are alternatives doesn’t mean people are going to take them. However, it DOES mean they can now leverage them. They can use those options to make a bit more bank, get a bit more consideration. Will they always? Of course not, not everyone comes to the negotiation table with the same mindsets and abilities. Some will get more leverage than others, but the fact anyone now can is much better than it used to be. Kevin Owens probably did get a better deal, took a look at that better deal, and decided this is good enough for me. If it’s good enough for Kevin Owens, then I am happy for his decision.

Bottom line: wrestlers do a lot for us, but in the end, they have to eventually do what is right for themselves. That may be signing with a company we disdain, that may be making stylistic changes in their wrestling that make us enjoy them less, and yes, sometimes that means leaving the business completely altogether. Wrestlers got to take care of themselves because it is proven very few if anyone else in the business is going to do it for them. This business will backstab you, blackball you, toss you out without a penny to your name and tell you “Good luck out there in your future endeavors” and yes WWE could very well do any of those things in the future to Kevin Owens. All decisions come with downsides and risks. WWE definitely will discard you after they think they don’t need you anymore, this year has REALLY proven that, but by now when you do business with the devil, you fully are aware of what comes with doing so. So be it.

But these are adults, they make their decisions, and you don’t have to like their decisions, you can strongly disagree, and if their decisions backfire you can react how you may, but they are STILL their decisions to make. Kevin Owens is an adult, an adult who has been making decisions about pro-wrestling for a long time. He has made his bed, I hope it’s comfortable and peaceful for him. Sincerely, I hope he wakes up every day confident he did what was best for him and his family. And if it turns out to be the wrong one, I won’t gloat, I won’t point a finger, I won’t criticize him. I won’t kick him when he’s down, instead, I’ll just hope he gets back up and rises again as he’s done before, and makes the wrestling business bleed red so he can earn his green.

Kevin Owens did what he wanted and felt he needed to do, not what we wanted him to do, and you know what, I’m absolutely thrilled for him. I’m thrilled that in all likely hood he considered his options and was able to get himself a deal he was satisfied and content with. I am happy he more than likely got a deal that he felt was right for him and his, and in the end that’s more important than our desires and wants when it comes to his career. I’ll accept not getting what I want if he truly feels he’s getting what he needs.

Good luck to him and I wish nothing but the best for him and his. May it work out.