Hook and Dominik Mysterio: Two Sides of the Same Coin

In 2020, two young offspring of legendary pro wrestlers came to the attention of audiences. The son of Rey Mysterio, Dominik and Taz’s boy, Hook. I believe it is fair to say that Hook and Dominik Mysterio have been on somewhat similar paths in their professional wrestling careers.

Both lads have been controversial in terms of how they have been received. One appears to be universally loved while the other has gotten a truckload of criticism. Why has one approach been so beneficial to one while another approach has been so hampering to another?

Following your parent into the business has never been a slam dunk, especially if your parent was a top star.

It is safe to say Dominik Mysterio isn’t everyone’s cup of tea. Thrown into the spotlight of the WWE Universe during the height of the pandemic, Dom was forced upon audiences when literally no one wanted him, into a feud no one cared about, during a time when watching WWE was a bigger choir than usual. In came Dom, looking like an oversized Manny from the hit show Modern Family, was thrust into a hammy feud with Seth Rollins which had already jumped the shark. Dominik was not ready and in my opinion, still isn’t ready for primetime TV. He has zero presence, no believability and looks un-composed as he goes throw the motions each week on WWE TV. And that is me being generous.  I think it’s fair to say no one cares about the Son of Rey Mysterio.

Professional wrestling has always been a business where being authentically cool is king. If you look at all the major stars in professional wrestling, whether you’re the “stylin and profiling” Ric Flair, or the zero fucks given Steve Austin, to be a big star in the business you have to ooze coolness. Coolness can take many forms and it can change very quickly. When you have it, you have it. When you don’t, many try fake it. And when you fake it, it rarely works (Hello Seth Rollins). Basically, you either have it or you don’t. Needless to say, if you have watched AEW over the last year you have surely come across the coolest motherf*cker in present-day wrestling scene. No, I’m not talking about Tony Schiavone with his ear candy, No I am talking about the brooding, mysterious figure that is Hook.

Since the son of Taz came on the scene on December 16 2020, when Hook first came to the attention of the worldwide wrestling audience, he slowly has gone about his business and building his aura. Just look at the guy. The untameable hair that neither looks intentionally groomed nor neglected. The simple yet effective clothing choices which make him appear stylish yet unbothered about his appearance, which is a hard line to straddle. His silent, but menacing glares plastered across his boyish yet threatening face set the tone each and every time he graces the screen. He is the personification of modern-day cool in professional wrestling, channeling a presence of the late great James Dean. He has IT without even trying.

But why is Hook seemingly adored while Dom is resented? Well, there are many differences in these two guys despite their similar situations.

AEW have not rammed Hook down the throats of viewers. Hook has been a background player in Team Taz, giving the audience glimpses of him week after week. Whether it’s Hook suplexing the odd guy on Dark or offering a handful of chips to Dante Martin on Dynamite, Hook has been slowly drip-fed to the audience. AEW has gone for the less is more approach with Hook and as a result, Hook has been able to slowly find his feet in from of professional wrestling crowds without doing too much.

Compare Hook to Dominik Mysterio, Hook has been very much gradually been phased in while young Dom has been rammed down the throats of the audience fair too quickly. Dominik has been thrown in the deep end without much forward planning while Hook has been allowed to slowly dip his toe in slowly in the shallow end. Dom has been supremely overexposed to the worldwide audience before he was ready and the fans resent him as a result.

Dom is also suffering from comparison to his father, arguably one of the greatest wrestlers to ever grace the ring. Whether it is fair or not to make such a comparison is debatable, but it’s a natural path for a viewer to make considering WWE’s presentation. The expectations appear to be heavier for Dom than Hook, perhaps down to the greater success archived by his father. Right now, Dominik appears to be more David Flair than Dwayne Johnson.

The jury is still out on Hook, but early reviews are very favorable. Hook has benefitted from being afforded much more protection by AEW than Dom has in WWE.

At this present time, Hook’s weaknesses, which I’m sure he has, have been well hidden. He rarely speaks, which actually adds to the mystic of his persona as well as potentially shielding him from overexposure. While I compared Hook earlier to Ric Flair in terms of his coolness, Hook has a long way to go to reach Flair’s level of pro wrestling.

From his recent debut, he looked at the very least capable and it’s clear AEW has something with him. He was presented as a savvy yet astute performer, with his smooth exchanges and tight throws highlighting what he appears to be good at. He did have Fuego Del Sol making him look like a million bucks and time will tell if he has more to his game, such as selling ability and skills at running the ropes but right now he has put his best foot forward. If they can continue to amplify his positives and hide his negatives, which should always be the goal, Hook is in the right place to grow at the very least.

Right now, Hook is in a fantastic position to gradually improve as a pro wrestler and as a potential star in the making. Dominik on the other hand, should be canned. This awkward father-son team he has with his Dad is doing no one any favors. It has the fans resenting Rey, with the viewers appearing to forget Rey’s past glories because of how bad his current run is. Ole Gunnar Solskjær as Manchester Utd manager energy. Dominik has been drowning since peaking in his first match and no one is getting over or enjoying it. WWE has already run this story into the ground, it should have been a one-and-done after Dom’s debut match against Rollins, but I speculate they will continue to do so regardless of how bad it is because that’s what they do.

What the future holds for both of these is unclear. I predict Hook is at least in the best place to hone his craft while Dom is most likely to continue performing whilst out of his depth in a sea of hastily written stories that no one gives a damn about. The future only appears bright for one of these guys and time will tell if following in their father’s footsteps was the right move. 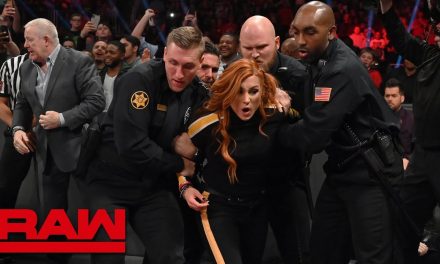