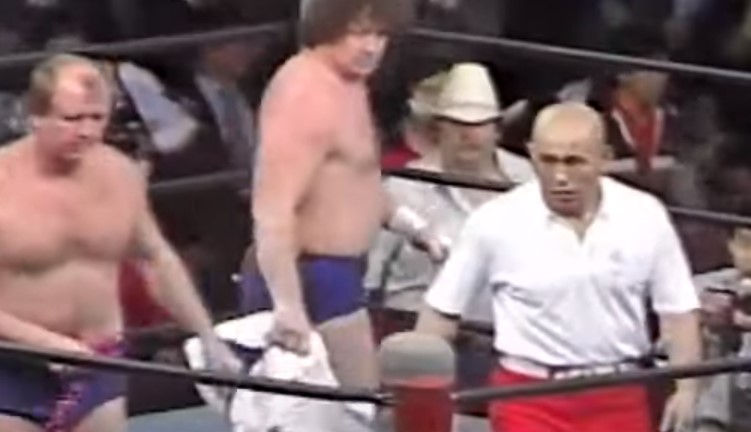 Forty years ago today, there was a historic and game-changing moment in Japanese professional wrestling when Stan Hansen made his debut in All Japan Pro Wrestling. Hansen accompanied Bruiser Brody and Jimmy Snuka for their match against The Funk Brothers in the final match of the 1981 Real World Tag League at the old Kuramae Kokugikan (Sumo Hall) in front of a claimed attendance of 11,500 fans.

Hansen’s jump would further heighten the rivalry between All Japan and New Japan and led to even more jumps for foreign talent between the two promotions throughout the 1980s. 1981 was a big year in the promotional war. Abdullah the Butcher made his debut in New Japan in June 1981 and Dick Murdoch in August 1981. Not to be outdone, All Japan poached Tiger Jeet Singh from New Japan in July 1981. While Abdullah and Singh were still huge stars in Japan at this point dating back to the early 1970s, they had arguably just passed their peaks, while Hansen had yet to reach his.

It was Abdullah’s jump that was the major factor in getting Giant Baba to go after Hansen and Singh. Baba hadn’t lured over a foreigner in several years since Billy Robinson jumped to All Japan in 1976 after a short but successful stint in New Japan that saw him win the Tokyo Sports match of the year for his December 11, 1975 bout with Antonio Inoki. That had been a big-money deal. But Baba seemed hesitant to keep that practice up until Inoki really accelerated things in 1981.

There was a lot of money being thrown around at this time to make all this happen. According to Dave Meltzer of the Wrestling Observer Newsletter, Abdullah and Singh were making at least $8,000 per week after their jumps, while Hansen would have been in that range as well at first. By 1985 when Brody jumped to New Japan, the promotional war being what it was and given his star power, he was making as much as $17,000 per week.

Hansen’s jump was quite the coup for All Japan and was a long time coming. Trained by The Funks, Hansen would first tour All Japan in 1975. But as he became a main eventer in the WWWF feuding with Bruno Sammartino, doors would be opened for him to go to New Japan and begin to become a massive star there feuding with the likes of Inoki and Andre the Giant.

By 1981, All Japan was in a difficult position. Business wasn’t great and NTV had taken on a bigger role in running the company. Wrestling on network TV in Japan back then still meant something and so instead of ditching All Japan, NTV wanted to see if it could be revitalized before they would cancel it.

In a Dallas hotel in June 1981, there was a secret meeting between Hansen, Terry Funk, Giant Baba, Motoko Baba and an NTV executive where Hansen agreed to jump to All Japan after his New Japan contract would run out later that year. While Hansen signed a three-year contract at the Dallas meeting, the rest of his time in All Japan until his retirement was based on a handshake deal between Baba and Hansen that would last past Baba’s own death and add to his legend as one of the greatest promoters of all time.

In his autobiography, The Last Outlaw, Hansen wrote:

“I signed a contract with Baba at our first meeting in Dallas, but the duration of the contract was for just three years. I worked for Baba for two decades and never signed another contract. We trusted each other and sealed every agreement between us with a simple handshake. That was the type of man he was, and I suppose he saw something of the same in me. I never knew another promoter like him. He was one of a kind.”

At the meeting, Hansen told everyone that he wanted to be able to keep wrestling in the style he had and wouldn’t compromise. Baba replied to him in English: “We want your style most of all.”

Hansen then went on to write that during his three remaining New Japan tours, he was constantly trying to avoid management who were trying to get him to sign a new contract. Hansen’s ability to evade management paid off, because other than the attendees of that secret meeting in Dallas, only Brody knew about the jump, because Hansen told him as they were close friends.

This led to some tension between Brody and the company, as he was not told by Baba that Hansen would be coming in before December 13. When Brody jumped to New Japan in 1985, he told Hansen that a big reason for that move despite it turning out to be a mistake, was that he wanted the chance to be the number one foreigner in a Japanese company again.

Let’s now take a look at the match itself.

When Hansen walked out to the ring accompanying Brody and Snuka while wearing street clothes and his signature cowboy hat, there seemed to be momentary confusion from the crowd as to who just who this was, but seconds later the crowd broke into loud HANSEN! chants and the commentary team was screaming his name.

The match itself was an indicator of the style changes that would come to All Japan during the 1980s. The Funks had wrestled in many Real World Tag Leagues at this point, and would often go to 45-minutes draws against teams like Giant Baba and Jumbo Tsuruta. There was none of that here. There was no extended periods of mat wrestling. This was a heated brawl between two teams that hated each other that was also accented by Snuka’s high-flying which was state of the art for the time with things like a springboard splash and a dive off the turnbuckle to ringside.

It was also a demonstration of just how over The Funks were at this time. There were many signs and banners in the crowd for them and the Spinning Toe-Hold got a huge pop everytime it was applied.

The defining moment of this match was when Brody and Terry were brawling on the outside. Brody grabbed Terry and Irish whipped him into a Stan Hansen Lariat. When the crowd saw Hansen ready his arm, they immediately stood up out of their seats, eager to see the first Lariat from him in All Japan. This was the Lariat heard around the world. I cannot think of a Lariat spot more iconic in wrestling except perhaps Hansen’s against Kenta Kobashi in their match on July 29, 1993.

Terry sold the Lariat like he had been hit by a shotgun blast. He would lay on the ground at ringside for the remainder of the match. That’s how you sell a finishing move. This being wrestling, referee Joe Higuchi was distracted because Dory had Snuka in the Spinning Toe-Hold. Now outnumbered, Dory would put on a valiant babyface performance against the two heels, but was eventually pinned by a King Kong Knee Drop from Brody. With this victory, Brody and Snuka won the 1981 Real World Tag League with 12 points.

If you already didn’t think this match was hot enough, the post-match would bring us one of the greatest angles in wrestling history. Despite the trophy ceremony for the winners, a very weak Dory tried to attack them. This led to a beatdown of Dory but Baba and Tsuruta rushed to the ring to make the save. This led to Baba and Hansen exchanging blows to nuclear heat from the crowd. Hansen, ever the professional, bladed on his first night in the company for the boss. The heels retreated to the back, and still selling the Lariat, Terry was carried to the back by the ring attendants.

Hansen, Brody and Snuka brawled a bit in the Japanese locker room before going back to theirs. At this point, in one of my all-time favorite Hansen moments, he screams while covered in blood, “THAT SON OF A BITCH, BABA!”

While Hansen definitely did not think that about Baba in real life, at this point Inoki probably did. All Japan was now on a big upswing and Hansen would bring changes to the style of the main event that would be further solidified when Riki Choshu and his Ishin Gundan stable jumped to Baba in 1984. Out was the mat work and long holds, and in was a fast-paced style with a lot more striking.

It is impossible to overstate how much of an iconic moment this was in this history of pro wrestling and its impact on the Japanese scene for years to come. To this day, some foreign wrestlers in Japan still mimic Hansen. And many famous wrestlers from Kenta Kobashi to Satoshi Kojima to Go Shiozaki have made the Lariat their finishing move.

Sit back, relax and take some time to enjoy one of the most important matches in wrestling history.

NOTE: The version of the match that I have linked to is not of the highest video quality, and there are better quality ones out there that are easy to find, but this is the most complete. There is no overdubbing of Brody’s theme and the post-match angle and backstage stuff is all there.