This was a nothing-out-of-the-ordinary opener for 10-men that typically flirt with the main event scene. This was primarily used as a match to get the duo of Yokosuka and Shimizu back on track after they lost their Twin Gate belts at Gate of Origin. The duo connected with a King Press on HYO for the victory. **1/2

Effective from this Friday in Sapporo, King Shimizu will compete under the new ring name Big Boss Shimizu. #dragongate#FantasticGate2021 https://t.co/2LI4Fg6iRv

If my thoughts and prayers are ever answered, this match will one day be headlining a show for the Open the Triangle Gate Championships and not tucked away as the second match on a loaded Korakuen Hall show. I loved every second of this. Minoura kicked things off against his former mentor, Masaaki Mochizuki, which gave the two a chance to show off their ground game. The pace quickened when Estrella and Kondo tagged in. In a moment of pure serendipity, Jae, who was manning the English broadcast booth by himself this evening, remarked about how Estrella is two weeks away from hitting his one-year anniversary with the promotion, which is incredible given how talented he already is. As he continued, Estrella and Kondo rattled off a ridiculous cat-and-mouse sequence that showcased exactly what the masked man is capable of.

This left Jason Lee and Don Fujii, and unfortunately for the Hong Kong import, Don Fujii was extra grumpy. Lee took an entirely unnecessary beating from the chippy veteran throughout the entire match.

Both of these trios acted as well-oiled machines and I’d hate for this to be the last time we see either group team in the near future. I certainly wouldn’t complain if they decided to run this match back at any point. After a blistering set of moves from the Masquerade side, Minoura forced Don Fujii to tap with the Engranaje. Add Fujii to the list of beasts that Minoura has beaten clean this year. ***1/2

Strong Machine J missed the first eight months of the year and since his return he’s worked a very limited schedule. After wrestling only three times in November, two of which were battle royals, the second-generation star returned to the ring and became the sole bright spot in an otherwise nothing match. The bulk of this contest saw Dragon Kid refusing to wrestle his mentor, Ultimo Dragon. It was comedy that didn’t do anything for me. That means a quarter of this match needed to be carried by Problem Dragon, who certainly didn’t embarrass himself, but that did cap the match at a certain level. Problem Dragon ate the Machine Suplex to end this encounter in six minutes. **

This was Okuda’s first match back from an injury that sidelined him in early October and a RIZIN fight that took place at the end of November.

After primarily squaring off against members of the Toryumon Generation for the first two months of their career, it was really exciting to see the Iihashi Brothers square off against men at the height of their powers in HIGH-END. Every time Riki gets the chance to shine, he takes the ball and runs with it. In this match, his interactions with Ben-K were the easy highlight for me. His chops initially failed to phase the former Dream Gate Champion, but Riki continued to chop the big man for just long enough to where his offensive eventually registered and damaged the bigger opponent.

DoiYoshi 2.0 continued their hot streak, this time with Yoshida landing a Pineapple Bomber on Okuda to pick up the win. ***1/4

After the match, Naruki Doi stunned the audience and said that he wasn’t in the mood to do Doi Darts. Boo this man.

This is SB KENTo’s second successful defense of the Open the Brave Gate Championship. Both victories have come over his generational rival, Jacky “Funky” Kamei.

I have been reviewing Dragongate for six years. At this point, I’ve quite literally seen talent come and go. I was there when the likes of Skywalker, Ben-K, and Yoshioka debuted and I have seen them rise up the card in the coming years. I’ve seen CIMA and Yoshino exit the company and youngsters like Katsumi Takashima and Sora Fujikawa step away due to injuries. During this time, no wrestler has excited me quite like SB KENTo. There’s nothing he can’t do and he’s only 21. I’ve predicted on Open the Voice Gate that by the time he’s 25, he’ll be a Grand Slam Champion. He’s halfway there and there is an overwhelming sense every time I watch him that his first Dream Gate crown will happen sooner rather than later.

His peer, JFK, is no slouch. He actually borders on brilliance, at times. He’s the embodiment of the Dragon System, mixing high-flying with technical wrestling in a lovable, fan-friendly package. He already provides such immense value to the promotion. SBK feels bigger, however. His presence feels like it would translate to any promotion in the world, it just so happens that he’s perfectly placed in the right promotion at the right time.

Just like their prior encounter in Kobe, these two youngsters ripped it up in front of a crowd that was clearly invested in the outcome despite the health and safety restrictions. They played off of their epic chop battle from their first match, laying into each other with even more vigor and intensity this time around. SBK vs. JFK 1 felt like a huge feeling out process in comparison to this match. These two brought “finishing stretch urgency” to the entire match.

Of course, that means the actual finishing stretch was electric. Everything from JFK’s Torbellino/Crucifix pinning combination to the final SB Shooter was golden. It showed that while both men have established their place in this promotion due to their undeniable character work and charm, they are both capable of wrestling at the elite level that this promotion requires from its top stars.

As SBK progresses in his career and moves onto bigger and better things, the legacy of these two matches will be unforgettable. Every time I think SBK has progressed at such a rapid rate for being a pro for just two years. I can only imagine where he’ll be in 2023.

This is one of the single most shocking results in the history of Dragongate. Shingo Takagi losing the Open the Dream Gate Championship to YAMATO in his first defense after Takagi ended CIMA’s two-and-a-half-year reign was a bigger surprise. Other than that, I can’t come up with another definitive answer for a match result that sent shockwaves throughout the fanbase the way this one did. There was never any doubt in my mind, nor in the minds of anyone that I talked to, that Dia Inferno was going to lose this match. For over a year, it seemed like this was the clear and obvious direction that Dragongate was building to. The addition of Skywalker and Diamante was a delightful surprise, but the end goal remained the same.

Dia Inferno was going to lose his mask.

This hodgepodge of storytelling and in-ring action resulted in a flawed, albeit thrilling main event. The drama that these four were able to build to down the finishing stretch of this contest needs to be applauded. I bit on a handful of nearfalls, mainly Diamante’s flash pins on Skywalker, because I found the thought experiment of someone other than Inferno losing their mask to be a fun thought experiment. Then reality set in. After being battered by a combination of Diamante strikes, Skywalker, whose mask was very clearly not positioned on his properly, shoved Dragon Dia into the hands of the Monclova-native for the Vuelta Finale.

Dragon Dia debuted three years ago and was positioned to be the heir to the throne that was once held by Ultimo Dragon, then Dragon Kid. Despite murmurings over the years that the man underneath the mask was devilishly handsome, I never expected his mask to come off. It didn’t seem like a realistic option. Of the four men in this match, the idea of Dia losing his hood was the most far-fetched. I wouldn’t have been able to comprehend an argument for it heading into this main event.

I have full faith, however, that this is not a swerve for the sake of it being a swerve. Dragongate has earned the leeway to throw a knuckleball like this every once in a while. I’m enthralled by this story.

The post-match was more engaging than the match itself. For what felt like an eternity, Skywalker stood dejected against the ropes, unable to look his fellow Masquerade members in the eyes. Jason Lee and Kota Minoura wanted answers and they were unable to get them. SB KENTo galloped down to the ring and celebrated Dia’s loss, once again stealing the spotlight with his elite charisma.

In front of his Masquerade compadres, RED, GM Ryo Saito, and a packed Korakuen Hall crowd, Dragon Dia unmasked himself to reveal a man in tears, overcome by disappointment and stunned by betrayal. This is pro wrestling storytelling at its best. This is why I think Dragongate is the superior product of the wrestling world. It’s not the six-man tags nor the fact that they have the best dojo in the world, it’s that they manipulate emotions far better than any other promotion in the world.

With Dragon Dia unmasked, Dia Inferno no longer served a purpose. He grabbed the mic from SB KENTo, speaking for the first time in a year, and revealing himself to be Yuki Yoshioka. He left to the Dragongate theme song, seemingly separating himself from the heel faction he spent a year aligned with.

There’s no way to look at this as anything but a win. This was gripping storytelling that now positions some of the best wrestlers in the company – Skywalker, Dia, Diamante, Yoshioka, and the rest of the Masquerade contingent – to enter into an emotionally gripping angle going forward.

This is pro wrestling done right. ****

Following one of the single most shocking results in the history of the promotion, Fantastic Gate 2021 is an easy thumbs up. Outside of the main event, Masquerade continues to crush it, SBK continues to establish dominance, and the rest of the youth brigade continues to impress. 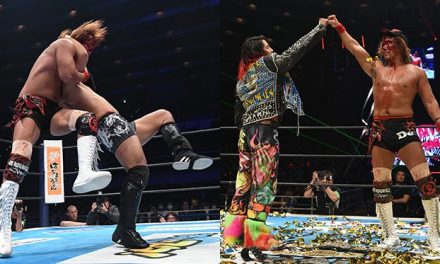 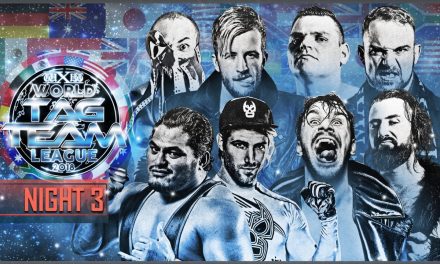