Who Should Win the Next Dynamite Diamond Ring? 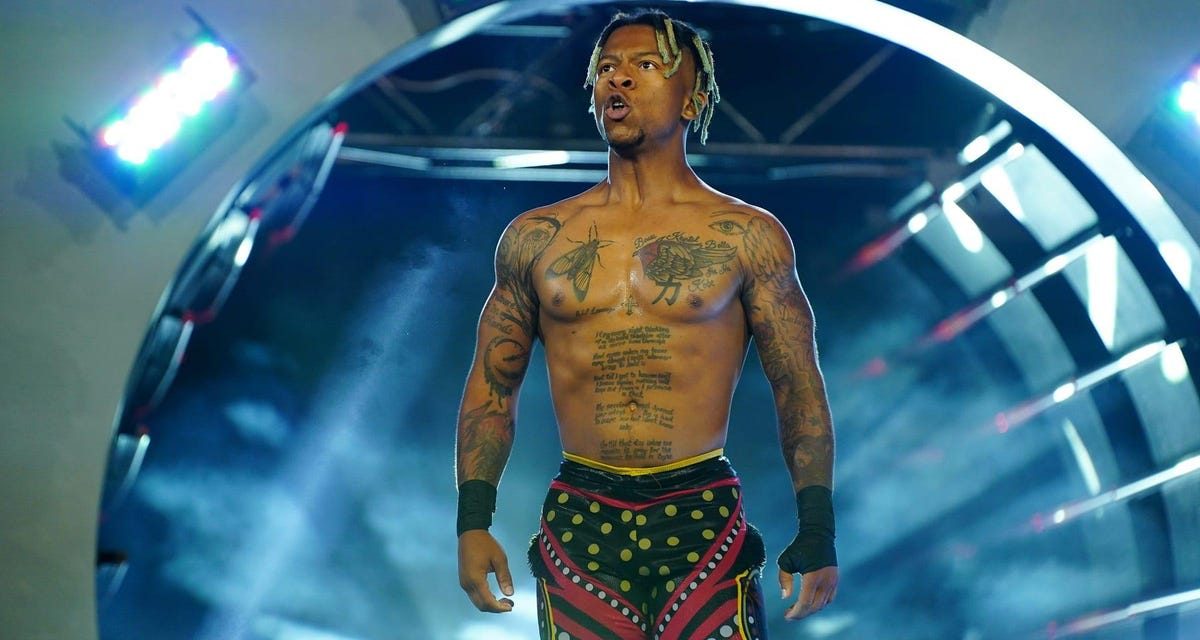 In a recent in-ring promo on AEW Dynamite, MJF made a clear point to emphasize that he holds the Dynamite Diamond Ring, and that he beat one “Hangman” Adam Page for it in the past.

Now, while most people took that mention as some foreshadowing of a future MJF vs. Hangman feud over the AEW World Championship, my brain went off on a different tangent. And that tangent is that I love the Dynamite Diamond Ring. I love silly props like this in wrestling, especially when they are used to enhance or change characters. MJF has in fact won the diamond ring on two occasions, first defeating Hangman Page in fall 2019 and then Orange Cassidy in fall 2020. He has used the ring to great effect—making people “kiss the ring”, showing it off obnoxiously on his pinky finger, and frequently using it to gain wins, including major victories over Cody at Revolution 2020, Chris Jericho in the Blood and Guts match, and most recently Darby Allin at Full Gear. In fact, I kind of wish MJF would play up the ring even more.

What has been most important about the ring, and what makes it exciting for the future, is that all the ways that MJF has used it fit into his persona. The ring is not shoehorned into matches or segments, it is used naturally by MJF as his spoiled, rich, and annoying character would use it. And that got me thinking – what other wrestlers in AEW would benefit from the Dynamite Diamond Ring? As we get close to the time of the year the precious ring has historically been fought for, let’s look at how it might play out.  As a refresher, in the past, the ring has been decided in two parts. The first match is typically a battle royal. When that match gets down to the last two participants, the match is over, and the next week the two finalists have a singles match to determine the winner of the ring. So with that clear now, let’s get down to brass tacks and look at what AEW wrestlers could win the ring this year and how they would benefit from it.

I don’t think MJF should hold onto the ring for the third year in a row. It has played out its usefulness for him. He is ready to move on to other things, and it’s time for the ring to help boost another wrestler’s career. However, he has to be in the conversation. He has been the only person to ever hold the ring and maybe he’s so entwined with it that he should just hold onto it forever.  His recent feud with Darby Allin feels like one that could continue forever. So even though it looks like MJF has moved on to a CM Punk feud, he and Darby could be the final two that face off for the ring. Or maybe one of the other “Pillars” – Sammy Guevara or Jungle Boy. Or maybe the battle for the ring finally leads us too…

MJF and Wardlow ending up as the final two in the Dynamite Diamond Ring Battle Royal (or DDRBR if you please) could finally be the impetus for their breakdown and Wardlow’s turn into a superstar face. You can easily see the scenario playing out where Wardlow is helping eliminate everyone in the battle royal for MJF and they end up as the final two. Then in the match, MJF demands Wardlow lay down for him, and he refuses. It could be great – but alas I think it is still too soon. I know they’ve been teasing this breakup for what feels like years now, but right now doesn’t feel like the time.

His nickname of “Platinum” just works perfectly for the gimmick. He can say he added platinum to the ring in some way, he can rap about the ring, he can talk about bling and diamonds and ice. Plus, much like MJF had Wardlow nearby to hand him the ring when necessary, Max Caster has Anthony Bowens. We’ve already seen The Acclaimed use a boom box to interfere in their matches, so having the ring could easily just add to their repertoire. Max could easily use it to interfere in Bowens’ matches from outside the ring, or vice versa. Maybe it’s too soon to give Caster this spotlight right now, but this ring is low stakes enough that it seems like a perfect opportunity to use it to push the young Caster and see how he does.

Another charismatic wrestler that wouldn’t look out of place with a diamond ring on his finger or on a chain around his neck. Lio just oozes personality and I have no doubt he would use the ring to great effect. Plus in his current storyline with Dante Martin, you could see the ring playing into it in multiple ways. Lio could use it behind Dante’s back to help him pick up wins. Eventually, Matt Sydal or someone will tell Dante about it, which could lead to Lio and Dante having a falling out. Or maybe it would all be a swerve (bro) and Dante fully turns heel and accepts Lio’s use of the ring and maybe even starts to use it himself.

Continuing the trend of wrestlers with an aesthetic in line with the Dynamite Diamond Ring, we have one Andrade El Idolo, whose character seems to be cool guy that dresses cool. A diamond ring would look nice with his tailored suits and Lucha mask pendant. Plus he’s got Jose the Tablet Guy right there to be the lackey that holds the ring for him. Also, we’ve already seen his managers use tablets and tasers to interfere in Andrade’s matches, so why not diversify the foreign objects a bit.

The man currently feuding with Andrade would also be an excellent choice to be the ring bearer for the next year. Since Cody made a promise to never challenge for the AEW World Title again, it would make sense for him to go after every other title or trophy he can. In AEW cannon, Cody winning the ring would also tie into his rivalry with MJF and the fact that MJF’s punch with the diamond ring cost Cody a big match in the past. Going even further back into the past, his history from Ring of Honor could be referenced as Cody used to prominently wear “The Ring of Honor”, an actual ring, when he was ROH World Champion. Cody having the ring could also play right into the love him or hate him character he’s trying to get over right now. Those that like Cody will cheer him on winning the ring, especially if he beats a hated heel rival such as MJF or Andrade. The anti-Cody contingent, however, will boo the heck out of him winning this ring, as it’s just further proof of AEW (and/or Cody himself as EVP) shoving Cody down everyone’s throat. Plus once he has the ring he can regularly play off the temptation to use it as a weapon, further pushing his character into “shades of grey” territory. And hey, he even has a lackey in Arn Anderson to hold the ring for him, as long as his pockets aren’t full of handguns.

Having lost to Bryan Danielson at Full Gear, Miro currently doesn’t have any clear direction. Being the vicious beast he is, Miro needs something to boost him back up and I think The Redeemer would be an excellent choice as holder of the Dynamite Diamond Ring (or DDR for short. I realize I could have done that a while ago but honestly typing out the obnoxious Dynamite Diamond Ring in full is just too much fun). As TNT champion he would pose in the corner and hold the title up as an offering to his vengeful god and he could do the same with the ring. More importantly, though, the ring is a symbol of marriage, and we all know how much Miro loves his flexible wife. And what better way to get back into his wife’s good graces than with expensive jewelry. Whether Miro just cuts one of his excellent promos talking about winning the ring for his double-jointed wife, or this is a way to get FKA Lana onto TV, it would be great. In fact, having just watched AEW’s Countdown to Full Gear there is definitely a Miro promo where he is wearing a necklace with a ring on it, so we know he can pull the look off.

Last year’s runner-up has a few interesting things he could do with the DDR. Obviously, this is a gimmick that works much better with a heel that can show it off, brag about it, and use it to cheat, but I think OC could make it work. First of all, with his finisher being the Orange Punch, it could easily get a boost with the use of the ring. In his current never-ending feud with Matt Hardy and the HFO the heels have frequently used brass knuckles, so a Dynamite Diamond Ring may be a good way to even the odds. I also think Orange Cassidy, Chucky T and the rest of the Best Friends could make some good comedy with the DDR. Orange can be his normal lackadaisical self with the ring, putting it on very slowly one day, and then the next show checking all the pockets of his various denim as he doesn’t really remember or care where the ring is is. I can see him handing off the ring to Chucky T before a match in various entertaining ways. Maybe he drops it. Maybe he just barely lifts his hand up, forcing Chucky to reach down and get it. Simple stuff, but for those who are fans of OC it would work.

Now there are many more who could make the Dynamite Diamond Ring work for them, but those 8 listed above are the most interesting to me. I could easily see either one of the Men of the Year (Scorpio Sky, Ethan Page) winning the ring. They fit the mold of heels who like to dress fancy and have a partner/manager who can hold the ring for them until it’s time to cheat. Some of their opponents in the Full Gear Minneapolis Street Fight could also make use of the ring. Sammy Guevara, Santana, and Ortiz all can play the cocky babyface whose use of the ring as a weapon would likely endear them even more to the audience rather than signal a heel turn. And while he doesn’t need the accolades or the push, Chris Jericho potentially still has the charisma and ability to make a goofy gimmick like this work for him.

AEW is rich with trophies like the DDR. They have the Owen Hart Cup coming up in the future, have recently given out a 50 win trophy to Hikaru Shida, and awarded Women’s Tag Team Tournament medals before. And who’s to say they aren’t looking to diversify with additional rings or jewelry for their women’s roster.

Here’s hoping the Dynamite Diamond Ring continues to be a great tradition and can be used to elevate any of the talented wrestlers currently at AEW.

Looking back at all the options, I think Cody would make the most interesting winner from a storyline perspective. However, personally, I would like to see a newer talent get the rub, so I would lean more towards Max Caster winning the Dynamite Diamond and Platinum Ring or Lio Rush “grabbing the ring” to further his storylines and continue the push of Dante Martin.

Who do you think should be the next holder of the prestigious Dynamite Diamond Ring?

State of US Title