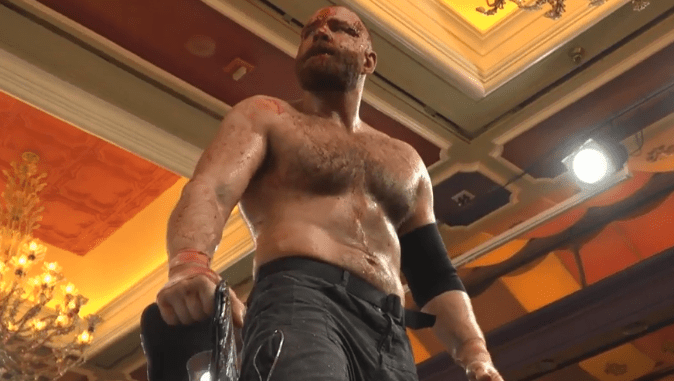 “I haven’t seen a million GCWs, there’s only been one. We’re not the next anything, we’re the first f***ing GCW and you’re all a part of it.”

Game Changer Wrestling is not for everyone. As the saying goes, that’s not a bug, it’s a feature. They make absolutely no apologies about being exactly who they are and if you don’t like it, well, there’s a color commentator who will elaborate on just what you can do.

The reason why Game Changer works so well, I think, is that it’s become a promotion that’s for people who are not for everyone. The overriding message of the announcement of a show on January 23 at Hammerstein Ballroom was that all of these wrestlers are the underdogs and outcasts. It is without question that the GCW die-hards see themselves in a lot of these characters.

Of course, people aren’t seeing someone like Nick Gage and thinking that they are violent like him. What they are seeing is the loyalty and acceptance that Nick Gage represents. His “Murder Death Kill Gang” is downright heartwarming if you really think about it past the name. Effy has found his LGBT tribe and rallied them under the banner of GCW, as our own Jeri Evagood has documented through her experiences.

Look at who the biggest heel in GCW is right now. It’s Matt Cardona, a rich kid who looks like a million bucks, got paid to have his dream job, makes money talking about a silly hobby, and has a smokeshow girlfriend by his side. No wonder people hate this guy in GCW right now, no one can relate to him.

You could describe GCW as the “Island of Misfit Toys”, which is the exact term Paul Heyman used to use to describe ECW. It happens to also fit GCW perfectly. Is GCW some ECW clone? Not at all. But looking at it, they have enough in common that I would say GCW is the modern ECW. If you started ECW today, it’d look a lot like GCW.

I mean, if GCW booked Low Ki and he no-showed, tell me you can’t imagine Brett Lauderdale standing in the middle of the ring telling the fans exactly what happened the same way Heyman ran down Sabu. He would likely feel he needed to because he had to explain it to the fans. Because the fans are GCW.

When I tuned in to Saturday’s Fight Club: Mox vs Gage, I was blown away by how hot the product felt. I should’ve had some inkling considering I almost booked a flight and went to this thing despite GCW being a company I only dive bomb in and out of from time to time. The place looked absolutely packed and the crowd stayed amped and helped the show feel like a breeze to watch.

Was everything good? No, of course not. Some of the wrestlers on the show I don’t think are any good. Some of the matches didn’t deliver. But overall, it was a very easy, fun show.

Of course, the reason this show sold out and was so packed was the main event between GCW World Champion Jon Moxley (a phrase that would have sounded INSANE 2 years ago) and Nick Gage. The match had me completely engrossed. I got totally lost in it while I was watching and thus, have no notes from it. I do remember Mick Foley on commentary being great, particularly his observation that deathmatch wrestling adds the Man vs. Nature struggle to Man vs. Man and Man vs. Himself. That’s brilliant. I’m sure I’ve heard him say it before, it’s probably in one of the books, but what an outstanding way to look at it.

Jon Moxley is an absolute madman, doing this purely because he wants to. He’s not going to be a GCW mainstay forever and that’s ok. While he’s been here, he’s been fantastic. He brings an aura and an audience that they don’t really have without him. Jon Moxley draws for the number 2 wrestling company in the world, when he shows up in GCW, it matters.

Nick Gage, on the other hand, is really showing wear. He doesn’t move like he used to, he can’t do everything he used to do, but he can still be Nick Gage. That matters more and this crowd is going to keep showing up for him as long as he can make his way through the mob and get into the ring.

Luckily for GCW, there’s a bevy of younger guys they have that are already primed or will one day be primed to take over. I think Atticus Cogar has tremendous upside if he keeps progressing in the ring. Effy is a hero to the GCW faithful already. Matthew Justice and Shane Mercer are guys that they could heat up whenever they want and could turn into draws for them.

Most importantly, they have Matt Cardona. No, the guy is not the second coming of Dean Malenko or anything of the sort, but man does he jump off the screen. Particularly in contrast to the GCW roster. This is a guy that got himself over in WWE until the company made a concerted effort to put an end to it. GCW has to hang on to this guy as long as they can, because he can be their top heel for years.

That’s not to mention that they also have this ability to pull in people from around the wrestling world and have done so with prowess. Recent shows have featured Minoru Suzuki, this show had a shocking appearance from Thunder Rosa that elicited an audible reaction from me on my couch late at night as I was watching. Then, of course, Dem Boys, the Briscoes showed up to challenge the GCW tag champs, Second Gear Crew. Complete with “Gimme Back My Bullets”!

Their next show features that match, as well as Nick Gage vs Minoru Suzuki in the battle of guys who are past the Sell By date but still have auras like none other. Another GCW show, another appointment for me to watch it as close to live as possible. What a world this has become.

This show felt like the moment that GCW planted their flag in the ground and said, “We’re not going anywhere.” It was the perfect jumping-in point for a casual fan that wants to follow more closely. You will get a great encapsulation of everything this promotion can be when it’s hitting every note of the bespoke drumbeat they have developed over time.

That’s not to say that GCW is perfect, even at what their niche. Their world title has been well booked all year, as well as this current feud and everything going on with Cardona, but there’s still a lot of scramble matches for no reason and the like. I would love to see them tell more stories and book more real programs for their wrestlers.

Don’t forget, also, this thing just might not be for you. And they wouldn’t have it any other way.

Ninja Mack gives me serious Yoshitsune or Blitzkrieg vibes. He can do some seriously impressive flying. His strikes, on the other hand, as the kids say, “ain’t it”. The look needs a little work, as well. My first thought when I saw him echoed what Nate Diaz once called the katana-wielding, gi-wearing Mike Ricci backstage at a UFC event: “Fake ass ninja”. To be clear, though, I love flippy guys, Yoshitsune and Blitzkrieg were two of my favorites many moons ago and I do enjoy the Ninja Mack.

Same match, but I always forget how good Lio Rush is as I see him so infrequently. Lio Rush is really great at this guys. It makes me even more excited to get him into the ring for AEW now.

Having Starboy Charlie working matches in front of so many people right now and being featured when he’s clearly not ready is darn near promotional malpractice. Let the kid grow up (literally) and get better. It feels like watching a rookie QB go out there right now with no offensive line and they’re getting pummeled constantly and end up getting discouraged and it ruins them. The Josh Rosen, if you will. Although maybe Josh Rosen would’ve always just stunk. Maybe Starboy Charlie will too. But right now, the kid just needs some learning. Send him to Shibata.

Thunder Rosa is a STAR. She’s also great. If there’s a better female wrestler in North America, I sure haven’t seen her.

Shane Mercer is the dumb jock version of Ninja Mack, in that he’s just going to do something insanely athletic and it’s going to be a transition move and that’s just the charm. He near murdered Yoya and it was awesome. This kind of wrestler is also VERY MUCH my thing.

If I were Tony Khan, I’d book a Jay Briscoe title shot against Kenny Omega just because I could. There’s nothing more to elaborate there. You can’t tell me you wouldn’t watch that Rampage live. I’d cancel plans. 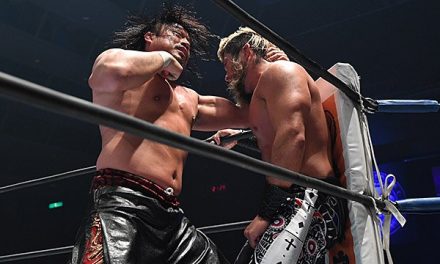 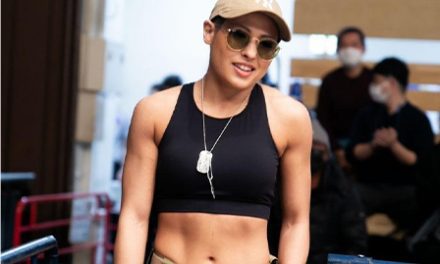