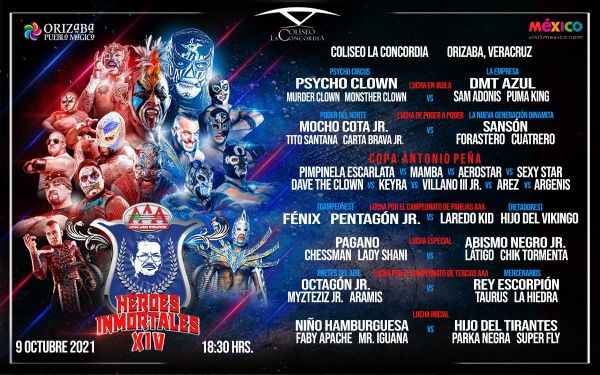 A no-doubt match of the year candidate highlights AAA’s major show this Saturday, Heroes Inmortales XIV. The Lucha Brothers defend their AAA Tag Team Championship against Laredo Kid and Hijo del Vikingo in a rematch from TripleMania. Also on the four-match card is a dream match between the best recent trios in CMLL and AAA and a cage match main event.

Heroes Inmortales takes place Saturday in front of a live audience in Orizaba, Veracruz. The show will start locally at 6:30 pm with three matches taped to air on next week’s TV show. The idea is Space will pick up the rest of the show live at 8 pm CT. That requires AAA to stay on schedule, something that seems not exactly in their wheelhouse. The live portion will be only four matches long, so it’s about a two-hour commitment.

There’s been no public progress on AAA’s international legal troubles – just the same “we’re going to fix it soon” vague statements for months – so the show is not legally available outside of Mexico. I’ll be streaming Space on Twitch, and I’m sure there will be other ways to watch the show. This broadcast is only a Mexico transmission, and so no English commentary.

This Heroes Inmortales show will be the first for AAA since TripleMania to have fans. The TV has continued to be closed sets at tourist locations, and AAA’s indicated that’ll continue for the immediate future. COVID is generally getting better in Mexico, but unpredictable closures still make it hard to plan.

That unreliability is particularly a concern for this show. Heroes Inmortales usually is about reloading and repositioning feuds for big finishes late in the year. AAA’s ideal calendar would have a large-scale TripleMania Regia show in Monterrey in early December and a slightly smaller Guerra de Titanes show a few weeks later. AAA hasn’t breathed a word about either of those shows this year. I keep presuming TripleMania Regia is happening, so I’m approaching most of these matches as a necessary setup to something more significant in a couple of months. It’d be a good sign if those upcoming shows were announced during this one, though AAA may wait even longer.

On the October 9 live broadcast:

I’m not motivated enough to look through the history of TV openers—I heard AEW had a good one a few weeks ago—but this seems to be among one the more bonkers possible ways to start a show in a promotion that tends to have wild stuff first a lot of the time. The Lucha Brothers show up to work when they come back to AAA, and they especially seem to like working with Laredo Kid & Hijo del Vikingo. It may be because those two fellows are also really good luchadors! This match will be great unless someone breaks a leg, and it could easily be the best match in the promotion this year.

One of the drawbacks of the TripleMania tag team match is there was so much going on that it was hard for any of it to register. It’s rare for me to believe a match with less Taurus is actually better, but maybe that’s the reality here. This bout also seems like another Hijo del Vikingo breakout occasion, except it feels like he’s already hit the ceiling. If people haven’t yet caught on to the guy using the ringspot for a springboard moonsault, no AAA TV match will change that. (Perhaps there’s a single exception.)

There is no logical reason to run this match back so soon unless Vikingo & Laredo are winning this time around; it doesn’t make much sense to keep beating the guys who are here in AAA all the time with the guys who aren’t. Still, it’s AAA, and we can’t be too reliant on logic when it comes to figuring them out. It might have been as simple as looking for the best Lucha Brothers match possible, and that is definitely this.

AEW tends to make more sense, and those guys teasing an upcoming AAA title defense on their programs heavily suggests it won’t be changing hands here. That challenge went without mention on this past week’s Dynamite, so perhaps someone in Jacksonville checked in to see what their friends in Mexico City were booking. I can’t blame them for not keeping up when they can’t see the TV.

It’s so strange to start the show with one of the best possible matches AAA can make and follow it with one of the most unsuccessful concepts they keep trotting out. These knockoff royal rumbles struggle to get over in the best of times. Copa Antonio Pena is in a dead spot with a lackluster field this time around; I expect AAA will change the order.

The announced group of people in this one—Pimpinela Escarlata, Mamba, Keyra, Sexy Star II, Aerostar, Argenis, Dave The Clown, Villano III Jr., Arez—are just a group of people AAA couldn’t find a better spot for on this show. Like Mr. Iguana and the TripleMania cup, Copa Antonio Peña may be a nice moment for a person who doesn’t get many solo wins. It’s just not something anyone involved is going to be all that invested in. There are nine names for an announced twelve-person field; I strongly suspect AAA will debuting another name from CMLL during this show and maybe in one of those spots.

This Copa is the third of these matches on the last four major shows. Konnan, on his podcast, acknowledged these matches hadn’t worked yet insisted AAA were going to keep trying them until they got them to work. It’s good to have a never-give-up attitude, but it’s better to limit to meaningful things. The people booked for this one are fine; it’ll just be an uphill climb to care about them in this setup.

AAA fans considred Poder del Norte as the best trio for years. NGD was among the strongest trios in CMLL for years. The two teams had to fight from the moment NGD showed up at TripleMania. The big difference is Poder del Norte as the best trio in AAA generally led them to opening shows, while NGD was closing them in Arena Mexico. NGD were the golden boys of the promotion, while Poder del Norte’s been the king of winning the matches only when they didn’t matter much. This one matters a great deal, and it’d be a surprise to see Poder win it.

NGD hasn’t shaken off the CMLL malaise in their two TV matches. They’re slower than their AAA rivals, lacking some energy and creativity. Those closed-set matches are easy to write off – a lot of the AAA roster has looked bored lately. NGD also lost a lot of their shine in their last couple of CMLL years. That’ll be the first test to see if they can turn it back on outside Arena Mexico’s stagnation. A motivated Poder del Norte gets the best out of everyone they wrestle, so we’ll find out what the best looks like for NGD now.

The invading La Empresa has remained undefeated since debuting TripleMania. The idea of an all-star team failed at TripleMania, so this is AAA putting together their legendary team – Psycho Circus was undefeated for years – to put down the outsider threat. It’s a good story idea, though the quality of the match is less promising. Cage matches in AAA are a few high spots, some blood, and a lot of dull brawling in a tightly confined area. Team cage matches generally are better. Just be prepared for a lot of standing around to reposition objects.

It’s probably still too soon for La Empresa to take a fall, especially if there’s a bigger show planned for December. There’s no hair or mask on the line, and leaving Monsther Clown destroyed in the cage as the ending is an easy way out of this. AAA is a heat promotion, and the most heat they can get is Psycho Clown getting beat down to vow revenge later. Psycho Clown staying in this feud would also seemingly take him out of AAA’s plans for Omega’s next defense. This match is almost certainly not the end for La Empresa, but the way it plays out may say a lot of where AAA believes they’re going for the next couple of months.

Airing on the October 16 episode

AAA is firmly in stage two. I hope there’s another blowoff coming in December to this, and then the bit will go away for a while. Until then, we’re treated to Tirantes being the sort of wrestler who you wish would remain a referee. There are far worse professional wrestlers than Hijo del Tirantes. He’s just a guy who knows how to do a few spots with Faby Apache well, and the rest is not compelling.

Parka Negra is the best guy in AAA no one knows is actually in AAA, perhaps including the promotion.

These are two reconfigured trios for the actual titles. The Los Mercanarios group that won these belts included Texano, who’s long gone. Hijo del Vikingo got elevated to the pair with Laredo, so Aramis slides the challenging Los Jinetes del Aire team. The prior versions of these teams had great matches, and there’s plenty left here to do it again.

Los Mercenarios as a faction hit their expiration date, not existing as a unit beyond a need to defend these trios championships. These belts need to get to either NGD or Poder del Norte to mean anything, and it’s easier to get there from the tecnico Los Jinetes than rudo Los Mercenarios. Yet, I think Los Mercenarios are trios champs primarily as a way to heat up Rey Escorpion for his TripleMania match, not about pushing them as a trio, and might keep them to give Escorpion a rebound win.

There are reasons for all the matches, though maybe not ones anyone can explain. Chessman & Pagano cost each other their match at TripleMania, got convinced by Murder Clown to try again, lost cleanly to La Empresa anyway, then got beat up by Abismo Negro’s crew for – well, it’s been a few weeks and no one’s thought to ask. They attacked Lady Shani as well, which counts as a setup for this match as long as you don’t spend more than a moment trying to figure out what’s going on.

AAA spent a lot of time early this summer teasing a mystery person behind putting Arez, Latigo, Abismo, Tormenta, and Toxin together. That mystery was dropped suddenly and hadn’t been brought up in months until the AAA’s announcers started pushing it hard on TV the last couple of weeks. That suggests AAA is finally going to pull the trigger on whatever they’re doing. This match-up also hints something is up: AAA wouldn’t be booking top-level guys like Pagano & Chessman with prelim people like Latigo without a story. It’s a bit tough to have faith in AAA actually following an idea to a conclusion. Even if AAA does their big reveal here, they’ve lost their momentum.

The tag title match on Heroes Inmortales is worth tuning in on its own. The rest of the card may not have anything special to a casual viewer. Some matches may be pretty great, but no other completely safe bets and none of the freak shows AAA can provide. (There’s been no sign of Marvel Lucha Libre since TripleMania.) The upside is that these should be easy to get through because AAA’s airing in two parts will be two hours or less. You’re going to end up seeing half the Lucha Brothers match via GIFs on Saturday anyway, so you might as well see it live. The rest should be worth a skim through later.