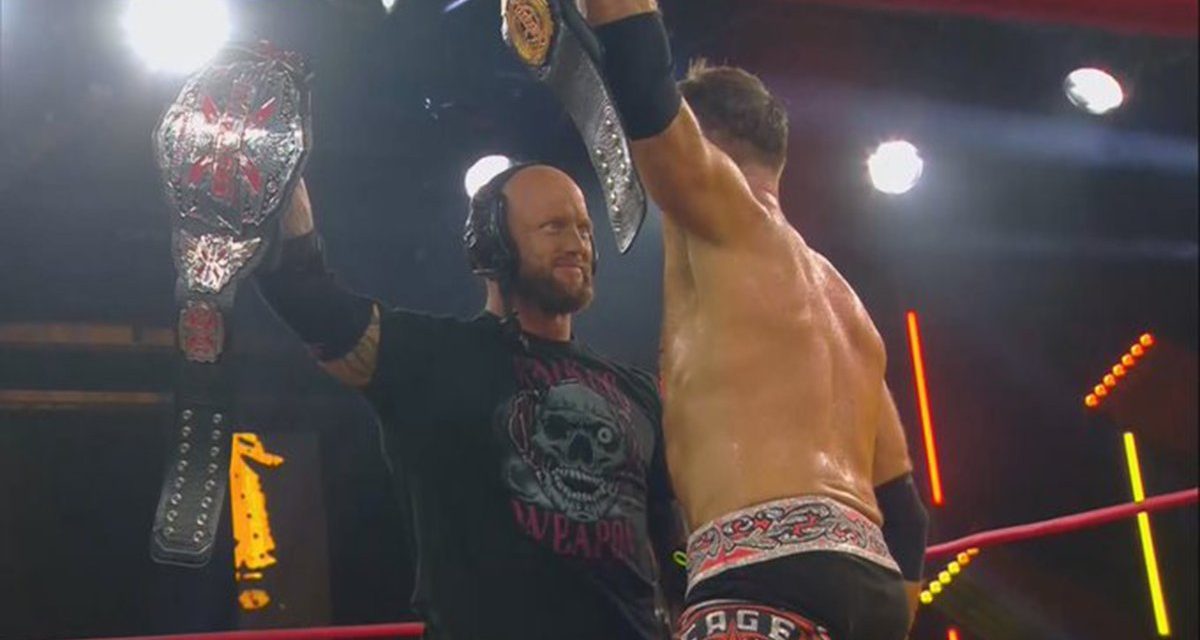 Impact Wrestling’s Impact Plus special for September, Victory Road, aired this past Saturday, with Christian Cage defending the Impact World Championship against Ace Austin in the main event.

When Impact was seeking to pep up their behind closed doors offering in 2020, they brought back their monthly special events, akin to B-level PPVs, to keep programming fresh and offering more top-end matches. The first one back was Victory Road 2020, which was a great show, and this year’s edition hit similarly impressive notes.

Since he debuted for Impact back in June, I’ve been impressed with Steve Maclin. He gives the impression of a man hungry to prove a point and bet on himself, and I think he’s made a concerted effort to demonstrate that. He does, however, still come across as quite generic.

As three-way matches go, this was fine. We started to get a dynamic where TJP is a heel, a move I’m totally behind as I think that enables him to do his best work. That was a plus, as was the finish. Petey Williams took out TJP with the Canadian Destroyer, only for Maclin to snatch Williams up, move him across the ring and hit the elevated reverse DDT. With the Canadian out the way, Maclin scuttled over and pinned TJP. ***

I’ve touched upon this theme multiple times before on this site, but the X-Division in 2021 has been absolutely stellar and I’m happy with any combination of these guys in the ring together. You’ve got people peaking, people hungry to put themselves in the proverbial shop window and ultimately the division feels like it actually matters in the grand scheme of things once again.

Clocking in at just over 8 minutes, this was non-stop, frenetic action that flowed brilliantly. There was a lot of two guys in, three guys out action in the opening exchanges but there were also some great three-man spots in the closing stages. Everybody got the chance to shine before Laredo Kid hit the moonsault belly-to-belly on Skyler for the win. ***1/4

I’m normally particularly grouchy about interference and shenanigans in my reviews, but I genuinely didn’t mind it too much here as it was to be expected with four people at ringside and the context of this feud. What did bug me though was the ref-sends-all-seconds-to-the-back spot. I don’t know whether I’ve been overexposed to it recently or what but it’s really beginning to try my rather limited reserves of patience.

Anyway, shenanigans aside this match was fine and felt like an end to this rivalry between Wilde and Dashwood. The exchanges between these two were good, as I’d expected, and the bridging German suplex Wilde hit for the win was a thing of beauty. **3/4

If I were asked to put together a list of my top 10 favorite wrestlers right now, Rohit Raju would, without doubt, be on that list. I’ve written before about him being the MVP of Impact’s ‘lockdown’ era. Over the last 18 months, he’s just taken his game to a whole new level. That was certainly true here, where he made Cardona’s offense look great and then kept the pace of the match high by chaining together his own moves with real intensity. Things still have time to breathe but he adds an urgency to everything he does that keeps you engaged.

Another element at play here that I appreciated was D’Lo Brown’s commentary. Normally it’s neither here nor there but while Cardona was on offense in the early stages, Brown discussed (without specifically naming GCW) Cardona’s recent success in hardcore matches and that this sort of stipulation was now his wheelhouse far more than Raju’s. It’s a small thing, and something that should be more consistent if they want to match the likes of NJPW or AEW, but it made a difference.

Cardona was always the likely winner here and the finish provided the complete pay-off to this story. The issues between Cardona and Raju accelerated after Raju hit Chelsea Green with a flying knee in a tag match on Impact. With Raju set to pick up the win here with a con-chair-to, Green hit the ring and put Raju down with a boot. That allowed Cardona to get up and hit a second Radio Silence for the victory. ***1/4

Of all the things to happen as part of ‘The Forbidden Door’ blowing open, Chris Bey joining The Bullet Club is one of my favorites. He’s someone I’ve been buying stock in for a long time and anything that will get him more opportunities to showcase his skills is fine by me.

I can’t say I’m anywhere near as high on big Hikuleo but he’s definitely getting better and I thought he was very solid here in what was an enjoyable tag match. FinJuice was over as always with the Impact crowd, which helped, but the match also had a relatively simple structure. It wasn’t a balls-to-the-wall sprint but it flowed naturally, hit all the right notes and delivered the right result.

Bey and Hikuleo worked over Juice’s leg in the early going and while the babyfaces were able to rally and get back on top, that work would prove significant. With Juice on the apron, Bey smashed his leg with a chair, allowing Hikuleo to take advantage with a Falcon Arrow for three. ***1/4

As it should be given the names involved, this match was made to feel genuinely important and the fans were invested throughout. Impact has absolutely got something with this Sami/Eddie team (I see them challenging The Good Brothers…) while Moose and Morrissey are both doing excellent work. All four dovetailed to produce something really engaging.

My issue came with the closing stages. By asking to be at ringside for the match earlier in the show, it was telegraphed that Alisha Edwards was getting involved at some point. First, Morrissey used her as a distraction while Eddie was working over Moose, and then he powerbombed her in the ring. Eddie cleared the ring of the spare referees and medical personnel to carry her to the back, leaving Callihan to fight alone. His resistance was short-lived, Moose putting him down with the spear. ***

Although I had no problem with the Alisha angle, as I think it got the right heat for Moose and Morrissey, it sucked the energy right out of the match and as such drops my rating. There’s something bigger and better here for these four men, and that probably comes at Bound for Glory.

There’s not a lot more I can say about the Knockouts tag division’s absence of depth but it did annoy me that Steelz and Evans hadn’t had a single two-on-two match before getting this shot. I know they’d done the stealing the belt gimmick, which is fine, but surely a squash match or two would have established them as a genuine, credible threat.

That aside, I thought this was solid, albeit relatively formulaic stuff. Evans looked good in her first proper outing and the match benefitted, as all Decay matches seem to, from the crowd’s unmitigated love of Rosemary. As someone who grew up watching a lot of Tajiri on Sunday Night Heat, I’ll always pop for the green mist spot, and that interjection from Rosemary allowed Havok to pin Steelz for another successful title defense. **3/4

There was nothing wrong with this but when the final bell rang, I couldn’t help but feel a little disappointed. It wasn’t that Swann and Mack didn’t win – although I’d like them to have a run as tag champs, this obviously wasn’t the time for the switch – it was that I didn’t feel they were able to really push The Good Brothers much past that gentleman’s three-level they’ve settled at in Impact Wrestling.

Swann and Mack got some shots in, and I was particularly loving their matching attire, but they didn’t really get any particularly believable nearfalls in before it was time for the Magic Killer and the 1-2-3. ***

Every challenger in Josh Alexander’s impressive reign as X-Division champion has provided a different test.

Ace Austin was the young upstart with a palpable speed advantage.

El Phantasmo was someone prepared to take any shortcut necessary and represented a first trip through ‘The Forbidden Door’.

TJP was the savvy submission specialist who would push Josh to prove his ‘Ironman’ moniker.

Black Taurus was someone whose lucha stylings were anathema to Josh’s methodical, grinding style.

Jake Something held a decided power and strength advantage.

Jake Crist was a crisp striker who also had the element of surprise in his favor.

Chris Sabin was the veteran, an eight-time former champion who could match Alexander hold for hold and force him to prove his worth. Sabin also arguably got the best performance yet from the ‘Walking Weapon’.

Moments into the match, Alexander was leaning all of his weight into Sabin while applying a front facelock. Moments later, there was a role reversal.

A staple of Alexander’s big title matches has been his ability to chain offense together by maintaining wrist control. Here, it was the savvy Sabin who possessed a vice-like grip of that same joint.

Alexander has always been able to snatch his nectar, the ankle lock, from any scenario. By regularly wrenching over Alexander’s arm, Sabin showed that that’s the sort of transferrable skill all champions possess.

Sabin was cerebral in his best performance since returning to the promotion last year. Alexander was once again brilliant too, demonstrating why I consider him one of the very best in the world, hitting that definitive final gear when his headguard was kicked off, pinning Sabin clean in the middle with the C4 spike. ****1/4

Personally speaking, I’m very high on Ace Austin’s ceiling. I know that’s not a view shared by all in the VOW team but I think he’s got all the tools and time on his side. In this match, his biggest spot to date, he delivered and had a very good showing.

While Christian never seemed in any particular danger of losing the title, there was the nagging possibility that Ace might complete his quest to become the promotion’s youngest-ever champion; when that record is currently held by Tessa Blanchard, you’d get why they’d want a change…

I’ve been enamored with Christian’s return to wrestling as I feel there’s a style to him you don’t really get with a lot of others. There is a vulnerability there; a feeling that he’s most at risk of losing in the opening moments but the longer the match goes, the smaller his opponent’s window for victory gets.

Austin’s finishing move, The Fold, has been presented as something that can come from anywhere. Like him, it’s inevitable. Here, he was on the receiving end of that instant death, with Christian snatching up The Killswitch and the inevitable three-count that followed. ***3/4

Post-match, Josh Alexander hit the ring and announced that he’ll be cashing in Option C and challenging Cage for the World title in Bound for Glory’s main event. Inject it.

Victory Road was one of Impact’s best shows of the year. Coming in at just under three hours, it was a breezy watch and built to a brilliant conclusion with the four title matches. While I’d have liked to see Christian and Ace get a couple more minutes, they had a very good match and the right follow up to the brilliant X-Division title match. Both are well worth your time and set us up nicely for Bound for Glory in five weeks’ time.