-Daily coverage of the NJPW G1 Climax & NOAH N-1 Victory tournaments! Every show not covered on a full Omakase episode will be covered exclusively on the Patreon- follow along with us all fall long!
-An extensive G1 Climax preview is coming exclusively to the Patreon this Wednesday! John discusses each of the participants and what they expect from them (both from a kayfabe chance of winning & match quality perspective), then previews all 18 nights of the tournament in detail! Get the all-time records for every G1 match, plus an “excitement score” for each night to help you pick & choose which to watch and which to skip!
-Our 1 Match series covering every Tokyo Dome main event in order just wrapped up the entire 1990s! Go back now and relive the decade through each and every Tokyo Dome show that took place (not just New Japan and not just 1/4!) as John breaks down the main events in detail, but also discusses tons of other notes of what was going on in the promotion at the time. It’s a great trip through a historic decade!
-Our various past series of “1 Match” episodes that cover many different themes: matches submitted by Omakase patrons, famous NJPW rivalries (Okada-Tanahashi, Naito-Ishii, Naito-Tanahashi), the aforementioned Tokyo Dome series and more!
-Past tournament coverage of every tournament you can think of, including both the G1 & N-1, Champion Carnival, World Tag League, Best of the Super Juniors, DDT D-Ou and more!
-Our Patreon-exclusive Retro Roulette episodes that covers tons of shows and themes with a completely randomized match list: Dominion, Best of the Super Juniors Finals, Champion Carnival finals, Wrestlemania, NJPW anniversary shows and more!
-Many previous Patreon-exclusive 5 Matches episodes with guests WH Park, Alan4L, Rich Kraetsch, Todd Martin, Chris Samsa, Sean Sedor, Nate from Everything Elite, Robin Reid from VOW Quiz Night, Garrett Kidney from Wednesday War Games, Mike Spears from Everything Elite/Open the Voice Gate and more!
-Anime Omakase, our series exclusively on the world of anime, which will soon have a new episode!
-And much more!

This week on Wrestling Omakase we break down a disappointing opening night of the NOAH N-1 Victory, plus review a great Korakuen Hall show from All Japan!

John is joined by returning guest Devin (@MoreThanMeatJoy), who did us a major solid here coming in as a last second replacement guest. Thanks Devin! John & Devin talk a little about baseball and some other supposedly real sports before introducing the NOAH N-1 Victory tournament, quickly running down the four block format and what they’re expecting out of some of the participants. They then get into a full review of Night 1 of the tournament from Korakuen Hall, a disappointing show featuring an absolute slog of a main event, but at least one awesome match worth watching. They wrap up the NOAH portion of the episode by looking ahead to Nights 2 & 3, both empty arena shows coming up next weekend.

Then they turn their attentions to All Japan, with a full review of their September 7th Korakuen. John & Devin break down another great Korakuen Hall show from AJPW, featuring two awesome title matches on top. They discuss two title changes, a strong undercard, Francesco Akira’s weeb mom, and a lot more. Finally, they look ahead to a couple of upcoming shows for All Japan, including a Triple Crown title match. And then things kinda go off the rails with one of the weirdest ending portions in Omakase history. 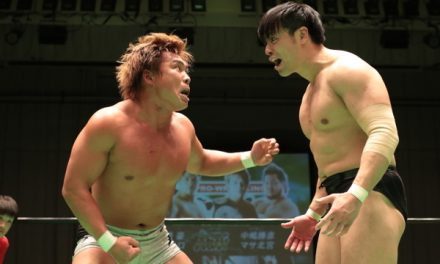 Open The Voice Gate: Dragongate The Gate of Destiny 2022 Review!