Hanan got a new version of her theme song “Ring Star.” That happens to be the most noteworthy part of this match. It was a quick one with six matches set to follow and saw Fukigen Death get the win. We are getting closer and closer to the day that Hanan starts pulling off these wins and becomes the massive star that many believe she will be in Stardom. Unfortunately for her, we aren’t there yet. *3/4

Unagi Sayaka vs. Natsupoi ends in a Double Count Out

During the 5 STAR Grand Prix, it is always odd when wrestlers who do not compete in the same block end up facing off in singles action. That would be the case here, as Unagi Sayaka of the Blue Stars Block would take on Natsupoi of the Red Stars Block. These two went to comedy for the majority of the matchup, utilizing an extra-large elastic band, reminiscent of the one Oedo Tai would use during the Kagetsu days. Natsupoi would be the one attempting to use it the most often, trying to hurt Sayaka with the snap of it after letting go from a far distance.

The match would end when Natsupoi tied up Sayaka with the band as she looked to win via countout. Before Natsupoi could roll back into the ring, Sayaka grabbed her by the legs and kept her from sneaking in, ending this in a draw. It was a fun little match that allowed the wrestlers to not be too serious or hurt their bodies during the grueling tournament. No complaints overall. **1/4

If you haven’t been paying attention, Rina has quickly established herself as the “problem child” in Stardom. She goes out into every match, no matter the opponent, to try and get into their heads and make them know that they are not good as they seem. It’s an interesting strategy seeing that this time out was against “The Icon” of Stardom, Mayu Iwatani. Rina instantly called Iwatani a “tramp,” saying that she was no icon. That led to Iwatani going on the offensive for the majority of the match and showing exactly what she is “The Icon.” They wrestled to an entertaining finish as it continues to show that even at such a young age, there is one of the brightest futures in all of wrestling for Rina in due time. Rina tapped in the end to Stardom’s GOAT. **3/4

The Mai Sakurai Match Series continued this weekend as the new roster member had her chance to face former Wonder of Stardom Champion Giulia. As we have seen in the past through the Unagi Sayaka Match Series, Giulia does not mess around with the new talent. Instead, she seems to not respect them in any form as she no sells any of their offense and does everything in her power to embarrass them. For the viewer, this is pure entertainment and it proved to be again here. Giulia was having none of Sakurai’s offense, brushing the majority of it off. The match would end when Giulia would lock in the Stealth Viper submission to make Sakurai tap out. **3/4

We must start this off by saying that Himeka and Mina Shirakawa delivered in this one. A unique pairing from the start, both women showed early that this was a must-win match as Himeka went 0-2 in her first weekend back while Shirakawa is still fresh off her first loss in the tournament against Starlight Kid, meaning that another loss could mean a freefall down the standings. It was Shirakawa who kicked off as the aggressor, attacking the bigger Himeka when “The Jumbo Princess” had her back turned. They went at full speed from here on out as they smashed each other with forearms at one point. Shirakawa tried to steal a win but the powerful Himeka got Shirakawa up and smashed her down with a Powerbomb to win the match.

This was not only better than expected but was the best match of the night up to this point. Two great showings in a row by Shirakawa as well. ***1/4

If anyone has been paying attention, they know that Takumi Iroha is a favorite in this tournament despite coming from Marvelous. That being said, it was always going to be a question as to who she lost to and how due to her likelihood of taking as few losses as possible while being near the top of the Blue Stars Block. Well, her first loss arrived on this show as Konami was able to go toe-to-toe with the Marvelous Ace and show why she is still one of the best. It came as a shock to many that Konami was able to take a win here after an up and down start to the tournament that had her sitting at 2-2 going into this one. She not only showed that she is still as great as many believed her to be two years ago but can still be someone who wins a tournament such as this one.

These two started off the match with some grappling before it would break down into a lot of strikes as often as one can imagine. Iroha’s striking prowess was overwhelming Konami at some points throughout the match as she was eating kicks as though she enjoyed it. Yet Konami used her strengths to her advantage, weakening the right arm of Iroha which would come into the finish. As Iroha went for the finish via Running Three, Konami would reverse it into a unique version of a Small Package pin to steal the win and pull off what could be considered the biggest upset since night one of the tournament thus far. It showed that Konami is a contender once again while Iroha isn’t unstoppable even if she seems to be sometimes. This was great. ***3/4

The most highly anticipated rematch in all of Joshi this year. Utami Hayashishita taking on Syuri after their 43-minute draw at Tokyo Dream Cinderella amazed the professional wrestling world. Would they be able to follow up such a massive match with all eyes on them in what would have a dramatically different environment and goal in the end? The answer is unsurprising — yes. Rather than opening up with chain wrestling or grappling, they blitzed each other from the get-go. Smashing one another’s faces with slaps, it was a sign that nothing between these two has calmed down since their MOTY-caliber battle. The disdain and necessary need to defeat each other remained in their hearts and showed on their faces. They would then work their way back into a normal match flow.

That flow would pick up as expected with only 20 minutes to get all their action in, leading to everything having a bit more behind it than the previous maneuver. At one point during the match, Syuri would go for a running penalty kick on the apron to Hayashishita. Hayashishita would instead catch Syuri, slamming her down to the outside with a gnarly Powerbomb. These two would continue to fight and not come anywhere close to letting up. Before you knew it, the final bell sounded and the second fight between the two rivals was over with the same result — no winner. After the match, they made it clear that the next step to complete their rivalry is a no-time limit battle for the World of Stardom Championship. 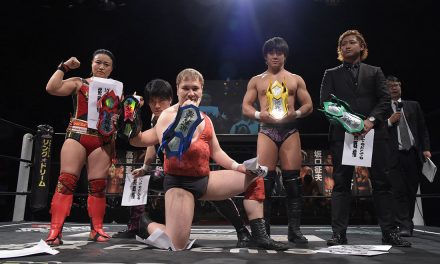