After COVID-19 caused the cancellation of four different shows Stardom is back in action with a limited crew as the 5STAR Grand Prix kicks on.

As far as opener’s go this was pretty good.  Nakano isn’t going anywhere close to full strength on this tour but Lady C is still in that phase where every match is a chance to prove herself so she’s working very hard.  There were some neat forearm exchanges too which I’ll always approve of ***

I must say I like Stardom putting Sakurai into a trial series to kick off her stint with the company.  It’s an easy way to help get her some more reps in the ring, which she desperately needs, and puts a lot of focus on her and any growth she has in that time.  Kicking it off against the world champion was a strong choice as Utami carried Sakurai to a solid outing.  I like Sakurai more than most but she definitely needs to be in there with experienced wrestlers right now **3/4

I enjoyed this for what it was. Poi and Death playing off of Death’s established tropes was pretty funny, especially Natsupoi pulling out a water gun to spray Fukigen’s fictional cigar.  Aside from that this was a High Speed focused bout with roll-ups aplenty. ***

This was a tune-up win for Konami to gain some points in the GP, I didn’t feel like the match itself was all that good as they never made me buy into the possibility of Ruaka winning so everything felt like it was biding time before Konami put her away. **1/2

Heel Starlight Kid continues to deliver the goods in the ring as she had one of Shirakawa’s better outings here.  Their strike exchanges were very good and really brought the match up a level.  Kid is staying near the top of the block and it’s becoming clear that she will be in contention to win the block come the final day. ***1/4

While there were flashes of a good match in here the 20-minute duration ultimately worked against Maika and Sayaka. So much of the match just felt like padding so they could reach their end goal of Sayaka pulling off this upset and avoiding defeat to Maika.  That story in itself isn’t terrible and its a solid feather in the cap of Sayaka, similar to Saya Kamitani’s draw with Himeka in the GP last year, but the match quality was lacking. ***

Wow what a match!  Himeka makes her return from injury and instantly delivers one of the best matches of the tournament.  Both women were on top form and were all go from the very beginning.  Iwatani was on top for a good chunk of the match and that was a very smart direction to go as she worked very well on top and allowed Himeka to fire up and use her power to get back into things.  Himeka’s power vs Mayu’s speed was the main focus of the finishing stretch with Mayu finding a number of ways to counter her way to success.

Iwatani was projected to be near the top of the block based on the final day lineup but her beating Himeka isn’t a result I saw coming so this was a real surprise.  It will be interesting to see where Himeka ends up finishing in the block after reaching the final last year. ****1/2

Stardom came back with more of a whimper than a bang.  The reduced crew means that a number of their top talents weren’t on this show and that is something we’ll have to get used to for the GP.  That said, the main event delivered and is one of the best matches of the tournament so far.  Mayu Iwatani is having an incredible run in this tournament after having a relatively quiet couple of months. 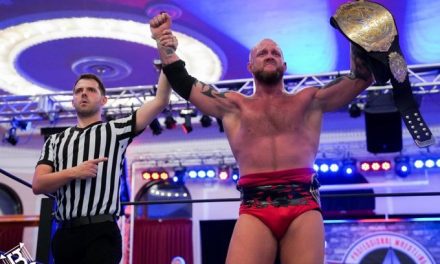