The 5STAR Grand Prix rolls into Korakuen Hall for one of the more bloated GP cards of the tournament.  Despite Momo Watanabe missing this event and having her match postponed there are five tournament matches on this show as well as the Stardom debut of Mai Sakurai who takes on Unagi Sayaka in a Future of Stardom Championship match.  Let’s not waste any time and get right into it.

Very short match that served to give some of the non-tournament folk a spot on the card.  Shirakawa pinned Lady C continuing the trend of GP contestants pinning the trainees to get some momentum back. **1/2

Queen’s Quest simply does not miss in these multi-person tag matches.  They’ve got it down to a fine art and delivered once again here.  I never thought I’d be saying this months ago but Oedo Tai is starting to grow on me.  Ruaka, Rina, and Starlight Kid bring this youthful and mischievous energy to the group that it was lacking before, and all three have benefited from being added to the group.  Saki Kashima feels like a new woman surrounded by her young cohorts who she is calmly leading down the path of evil.  It’s safe to say, I liked this match but I also had to comment on just how much I enjoyed Oedo Tai here. ***1/4

This was an interesting match, to say the least.  Sakurai was trained by Actwres girl’Z so brings something different to the table than your typical Stardom rookie, but she also only managed to get 20 matches under her belt during her time with AWG so she is still very rough around the edges.  What that led to was this match which made up for its lack of polish and execution with good ideas and the signs of potential in Sakurai.  I can’t recommend this to anyone that’s solely interested in workrate but if you want to see the starting point of Sakurai’s development and get a glimpse at how Sayaka works with those less experienced than her then this is for you.

Sayaka was always going to win as Stardom has big things in store for her and I expect her to hold on to this belt for some time to help establish her with strong wins. **1/2

Fast-paced fun here as Kid gets the slightly surprising win over Death who stays rock bottom with a surprising 0 points.  This felt like a match that could really go either way but I like them giving Kid the nod as Death is someone experienced and protected, so beating her is a big deal for Starlight Kid.  Kid can use as many of these types of wins as possible while her heel turn is in its infancy if they want to establish it as a good move. ***

Another somewhat surprising result as Saya Kamitani bests Konami.  While Stardom did protect Konami on the finish, Kamitani did a hurricanrana into a roll-up, she is off to a poor start in the GP sitting at 2 points.  Unless they have Konami go on a late tear in the tournament she may finish in the lower end of the table, which would certainly make for an interesting dynamic given Oedo Tai is currently in a state of limbo without a clear leader due to Natsuko Tora’s injury. The match itself was somewhat uninspired as neither wrestler really brought much to the table outside of their standard stuff. **3/4

Tam Nakano is the smartest woman in this tournament.  She’s been working arm injury angle since day 1 and it means that her matches are 50% limb work and 50% cool sprint, this way she’s likely to stay well-rested throughout the tournament even if she doesn’t have any blow away matches.

When this match did get going it was very enjoyable as Maika’s power mixed well with Nakano’s striking as the two sprinted their way to the finish with no wasted motion.  Nakano pulling out a brand new roll-up finisher, which she has since named Andromeda, was a clever way to protect Maika despite having her lose to an injured opponent. ***1/2

This failed to meet my expectations, both Iwatani and Natsupoi are among my favorites in Stardom but they never came close to fulfilling their potential.  I did like the dynamic between the two as Iwatani played up her slightly more heelish and cocky side against the High Speed Champion which is always a sight to see.  Hopefully, they can wrestle again sometime and blow this one away because I know they have it in them. ***1/4

This is what we like to see!  Koguma and Giulia have a mini-feud dating back to Koguma pinning Giulia in a tag team match a month or two ago, after that the two had some heated exchanges in a tag title match which Giulia ultimately won by pinning Koguma.  They picked up right where things left off with this one as Giulia took on the role of the aggressor, which she always plays to perfection.  Koguma was up to the task when it was time for her to make a comeback and her German Suplexes were absolutely nasty as always.  While I went in predicting an upset from Koguma it was Giulia who got the win with the Northern Lights Bomb, Koguma got her own win however when Giulia showed her respect after the match. ***3/4

While I had fun watching this show I can understand that it won’t go down as many people’s favorite of the GP.  I thought Koguma and Giulia delivered an enjoyable main event and the QQ vs Oedo Tai tag match was a highlight of the undercard but a lot of the matches were pretty skippable, with many likely to outright hate the Future of Stardom Championship match.  With Stardom having to cancel a slew of shows due to COVID-19 complications this will be the last GP action we get until August 28 when Takumi Iroha enters the fray so things can only get better from here 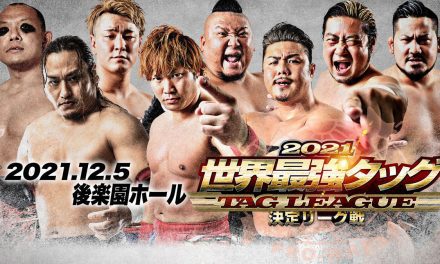