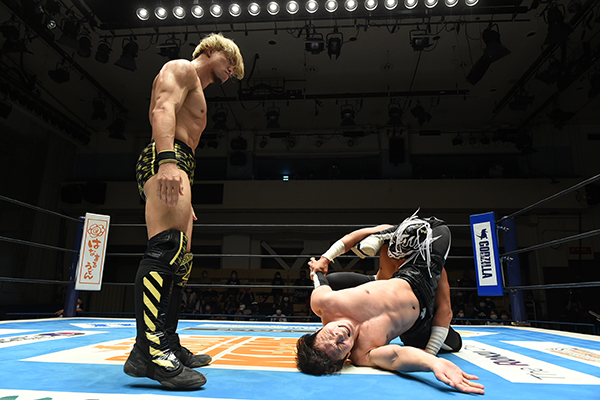 Note: This article was completed before the August 17 NJPW Summer Struggle show.

With the remaining three tournament matches taking place tomorrow, let’s look at the six competing teams and see where they fall in the standings.

The reigning and defending IWGP Junior Heavyweight Tag Team Champions are undefeated in the Tag League. The self-proclaimed “World’s Cutest Tag Team” by ELP, he and Ishimori are doing just enough to get the victory. With their matches filled with taunting and constant back rakes to their opponents, they haven’t relied on El Phantasmo’s most likely loaded, Sudden Death superkick to win their first two matches.

In their victory against Roppongi 3K, the pair planted the seeds of doubt that haunted them thus far. Their win against Ryusuke Taguchi and Master Wato was in peril as ELP removed whatever Taguchi found at last month’s Wrestle Grand Slam out of his boot. El Phantasmo and Ishimori, not feeling the Sudden Death would be effective when they needed it, panicked. Fortunately for them, Wato’s RPP miss secured their victory. It wasn’t until their victory against Gedo and Dick Togo that Phantasmo unloaded a full power Sudden Death on Gedo to win. Granted, both Bullet Club teams were cheating, but considering that ELP used Sudden Death on a teammate, that may or may not come back to haunt them. It was the Sudden Death once again that knocked out Tiger Mask in today’s match-up, preventing him from escaping Ishimori’s Bone Lock.

That win against Tiger Mask and Robbie Eagles makes the champs the only undefeated team remaining in the competition. El Phantasmo and Taiji Ishimori have solidified their entry in the finals. The only goal remaining is to best El Desperado & Yoshinobu Kanemaru to maintain their undefeated streak.

Robbie Eagles, the current IWGP Junior Heavyweight Champion, and Tiger Mask shared first place, until today, mainly on the back of Eagles. Kevin Kelly described Tiger Mask’s role as weakening the opponent’s legs for Eagles to apply the Ron Miller Special submission. For his part, Tiger Mask has described himself as a “Tiger who pounces when the time is right” and puts over Eagles in backstage comments.

In their match against Gedo and Dick Togo, Eagles beat them by himself as soon as he was tagged in, aside from a crucial save by Tiger Mask. Their match with Roppongi 3K was a closer affair, with Eagles getting his knee targeted. Despite that, Eagles picked up the victory leading to R3K’s second loss. El Desperado and Yoshinobu Kanemaru put up a challenge as they targeted Robbie’s leg heavily. Eagles and Tiger picked up the victory when Robbie exploited the issues with Kanemaru’s knee. All three wins came from the Ron Miller Special. As mentioned above, their streak snapped as their match with El Phantasmo and Taiji Ishimori went into Sudden Death. After the match, Eagles looked on with great disdain at his former Bullet Club teammates for what happened to Tiger Mask.

While Eagles and Tiger look to regain their momentum, Robbie is already looking ahead. He called out Hiromu Takahashi, mocking him for being cleared to wrestle but not currently wrestling. He challenged Hiromu to a title match at Wrestle Grand Slam at the MetLife Dome.

Robbie Eagles and Tiger Mask need one more victory against Ryusuke Taguchi and Master Wato to solidify their spots in the finals.

Suzuki-gun’s Junior tag team threats started the tournament strong at 2-0. Yoshinobu Kanemaru is responsible for both victories against the teams of Ryusuke Taguchi and Master Wato and Gedo and Dick Togo. During the second match, Gedo and Togo worked over Kanemaru’s left knee. While Kanemaru toughed it out, including attacks with the steel barricade and a chair, during the third match, the damage on his knee was scouted by the Sniper of the Skies, Robbie Eagles. Today’s bout with Roppongi 3K saw Sho and Yoh battle violently early on, desperate for their first win in the tournament. They, however, could not compete with the knee targeting prowess of Suzuki-gun, as both members of R3K quickly discovered. Despy put Yoh away with the Pinche Loco, with the actions, or in this case inactions, of a betrayer.

Suzuki-gun can make it to the finals, but it won’t be easy. The best way to do that is to win their remaining match against El Phantasmo and Taiji Ishimori, and for Tiger and Eagles lose theirs. If the Flying Tigers also beat Ryusuke Taguchi and Master Wato, then there is a chance of a situation of a three-team final.

The Hontai teammates’ tournament puts some focus on the wannabe “Master” Wato. While he has flashes of good moments during the Tag League, his occasional sloppiness and recklessness have been highlighted, only mostly in kayfabe.

The first two matches between Suzuki-gun and El Phantasmo and Taiji Ishimori ended in losses for the pair. Taguchi’s hip attack-heavy offense and moments of cunning helped keep the team competitive. While Wato can be dangerous with his arsenal of strikes and high flying, he also gets in his own way. At one point, Taguchi had to remind Wato to pin his opponent. In another instance, Wato gets attacked by El Phantasmo, baited in by mimicking one of his taunts.

Wato did get the pin on Yoh of Roppongi 3K, with Taguchi’s help. While it’s a great win for him, between what’s going on with R3K at the moment and the fact the El Desperado and Taiji Ishimori still talk trash about his inexperience, it’s more of a loss for Yoh.

Despite what Master Wato said after Six or Nine’s post-match promo, he and Taguchi were out of contention for the finals at that point. The best they can do is get 6 points total which won’t do the job.

Due to issues with COVID-19, New Japan prevented Shingo Takagi and Bushi from working today’s show due to both having fevers after yesterday’s Summer Struggle show. The remaining Los Ingobernables de Japon members and their Bullet Club opponents, including Gedo and Dick Togo, were also pulled from the show as a safety precaution. As a result, Gedo and Togo had to forfeit their points to Six or Nine.

The only role left for Taguchi and Wato is to play spoiler to Tiger Mask and Robbie Eagles.

The former Far East Connection turned heel managers of the Bullet Club have had the second-worst tournament in 2021. The consummate rule-breaking team, Dick Togo, and especially Gedo, have used every dirty trick in the book during the tournament. These tricks include but are not limited to stalling, eye pokes, working over Kanemaru’s knee on the steel barrier, steel chairs, low blows, Gedo’s belt, Gedo’s brass knuckles, and Togo’s garrote wire.

At the end of the day, where did all that cheating get them? Both men getting demolished mostly by Robbie Eagles, Gedo getting kicked in the junk by Kanemaru, and El Phantasmo using the Sudden Death on Gedo.
That’s three losses owed to Gedo and 0 points on the board. They don’t have prayer at the finals. Their only impact on the Super Junior Tag League was injuring Kanemaru, which didn’t benefit them. As mentioned earlier, Gedo and Togo had to withdraw from their match with Taguchi and Wato due to issues with COVID, awarding their former opponents two points.

If the Gedo and Togo are well enough to compete tomorrow, they may get their one win. It may be against Sho, but it will likely be against Yoh. It will not be them together because Roppomgi 3K is no more.

How is this possible? Roppongi 3K are five-time IWGP Junior Heavyweight Tag Team Champions. They won this thing and the preceding Super Junior Tag Tournament three years straight. How have they’ve gone winless? It’s seemingly impossible. Whether R3K’s run so far is the best story of this year’s tournament, objectively its worst result, just like the end of today’s match, it was the last.

Let’s rewind to earlier in Summer Struggle on July 24, 2021. That was the site of Sho and Yoh’s last win, secured by their Chaos stablemate, Robbie Eagles. Since then, Roppongi 3K had been on a nine-match losing streak (excluding the Rambo at Wrestle Grand Slam at the Tokyo Dome). There was one constant in all those losses. The one who was the deciding pinfall at the Elimination Match on July 31. The one who has taken all three losses in the Super Junior Tag League. The one who fell to the Bullet Club and lost the IWGP Junior Heavyweight Tag Team Championships at Kizuna Road on June 23.

It was Yoh, and when the first tournament loss happened to the ELP and Ishimori, it stung. Aware of his losing ways and, with Bullet Club saying they suck and questioning their commitment as a team, Yoh already doubted himself. Sho tried his best to be positive even though he said after back-to-back losses to the champs that they “lost it all.”

The second loss to Robbie Eagles and Tiger Mask furthered the team’s woes. Both were distraught after the second loss. Sho felt they could still bounce back while Yoh was apologetic, curled up against the wall.

With the third loss to Six or Nine, even Kevin Kelly was stunned that Yoh would eat the pin to Master Wato. Wato even admitted in his post-match promo that he wasn’t sure if he was better than them despite his win. At this point, Sho and Yoh are inconsolable. Eliminated from the finals, Sho still showed brief slivers of positivity but was consumed by his denial, almost freaking out. Yoh felt something has changed about him, but he doesn’t understand what.

After Suzuki-gun hunted the knees of their opponents like big-game hunters, YOH could not initially save himself from El Desperado’s Stretch Muffler. That was the moment where SHO  finally snapped. He watched as his Young Lion dojo mate turned tag team partner for nearly a decade suffer as Despy and Kanemaru tortured him. Despite YOH’s resolve, he succumbed to Deperado’s Pinche Loco.

Robbing the victors of their post-match promo, SHO told the confused duo to leave with their points. Hitting his partner with Shock Arrow and stepping over his prone body, a callous SHO ended Roppongi 3K and told SHO that he was now useless to him and to quit and retire.

There is one more match in the books against fellow members of the Gooseegg Club, Gedo, and Dick Togo. After today, there is no way of telling how, or if, this match will play out. 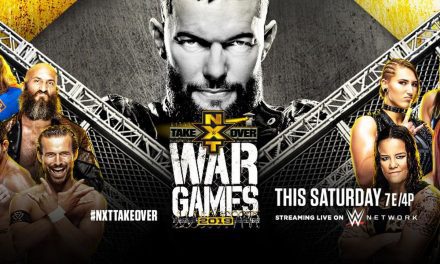