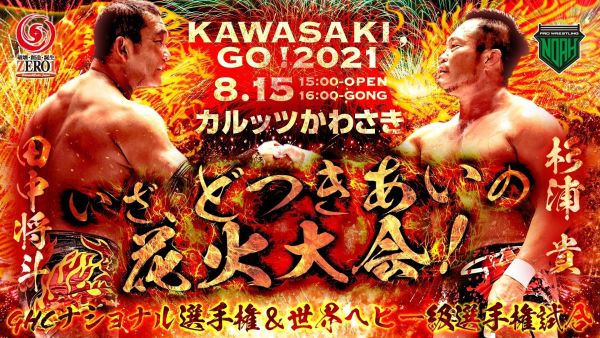 What is allegedly more fun than one title? TWO TITLES! That’s right! The GHC National Champion Takashi Sugiura takes on Masato Tanaka who is the reigning and defending Zero-1 World Heavyweight Champion. Someone will be walking out with all the gold, all the pride, all the glory, all the bragging rights. Am I hyping this enough? If I’m not, that’s okay because the image of both these men beating the living hell out of each other should hype you up far more than any amount of words I can type. I am extremely stoked for the main event, but the rest of the card has the possibility to pull its weight as well.

Short and compact, exactly what this match should’ve been and was. It’s under ten minutes and they keep it real basic, but that is probably the correct decision for this opening affair. It is extremely rude to call this a nothing match, as both men work hard and there are some fun interactions, but you can skip it and feel absolutely guilt-free. Inaba never had a chance of winning, and never comes off as having a chance. Usually, this would hurt a match, but in this case, it’s an opening match, it’s Kitamiya abusing his opponent, it’s fine for what it is and I got zero complaints about that affair. Lady’s 3. ***

I do appreciate, and will always appreciate, King Tany having an actual crown. I plan on getting a tierra for my birthday so I respect these sorts of decisions. Can the juniors overcome the power of funk in this match…. I hear you ask out (Well maybe one of you). The answer is, certainly not. The good news, they bring the fire and energy this match is going to need to potentially win me over. They seem motivated and with something to prove and that puts a pep in every step whether it’s being on the offensive or selling. They do all they can to bring and keep life in this match, and it’s mostly entertaining to me. In truth, I didn’t dislike this nearly as much as I thought I was going to, and I owe it all to the juniors. All and all, I’m giving this slightly above three and while King Tany and his team did nothing bad, it was all the efforts of the Juniors that won me over. *** 1/4

Good solid tag match, with Harada’s poor leg getting abused throughout thanks to Suzuki and Hidaka. In fact, the focus on Harada’s leg could’ve been a little shorter. It made sense, and it was solid work, but it got to a point where I was ready for the hot tag and to get into the next gear of the match. Ultimately, this match failed to click with me. Not saying it was bad, but I couldn’t get in synch with it. The work felt okay after the leg work segment but nothing about any of it excited me or got me going. I do appreciate Harada making it clear his leg was hurt throughout the rest of the match, and it clearly affected some of his offense and was used against him. I don’t know, just wasn’t feeling it. Sometimes that happens. **2/3

Dear wrestling gods, may Kiyomiya in the near future finally defeat Mutoh. Okay, that’s out of the way. I had a feeling going in this could be pretty good. It was a pretty solid affair. When it hit a second gear it started to get really good. In fact, it transformed into a pretty fun and exciting affair with the crowd clapping and getting into it. The first thing in the show I sunk my teeth into. Kiyomiya and Ohara’s performance got better as the match went on, going from okay and solid to energetic and damn good. They click and have chemistry and while at first I was worried only Ohara had the fire I needed for this match, Kiyomiya would find it, ignite it, and match it and end up with a damn good singles competition between the two. Kiyomiya seemed excited and motivated by the end of it, which hopefully bodes well for the future, while Ohara put on a damn good performance as he takes a loss. The first thing on the show that felt like it was worth watching and I’m very happy about that. Good stuff with a good closing stretch. *** 1/2

We now head to that wild and wacky world of the Juniors! Aleja had a good showing in what was quite an entertaining championship match. Good solid and consistent action throughout the entire match with control going back and forth. The further up the card we go the more and more I’m getting into the matches, which tells me the show has been building up nicely. The crowd starts to get into this match by clapping as best they can as Aleja really impresses this match with his energy and athletics. That’s not a knock on the other three by any stretch, just pointing out Aleja gets a nice spotlight and he takes good advantage of it in this match. Tadasuke and Aleja controlled a good portion of the match and worked well enough together I would’ve totally bought us having new champions. Alas, it was not meant to be, as I should’ve expected, but convincing me otherwise, even if ever so lightly, helped the match out. Equal with the previous match. I loved Tadasuke submitting while Aleja desperately tried to get back in the ring while prevented from doing so. ***1/2

As per usual, Kendo Kashin is in this match so rating-wise it already starts with a disadvantage. Unfair to be sure, but that’s how I work. I will ALWAYS enjoy big beefy men trying to knock each other down. So Fujita and Soya going at it early on in the match was my jam.  At one point Kongo hit repeated dropping elbows on Kashin and…. gets worked over for a good stretch Kashin abuse is a good way to win me over. Once my personal enjoyment of Kashin’s abuse ended, things cooked up pretty well in this match. I enjoyed the Nakajima and Sakuraba interactions a bit more than I expected, especially when they just kicked each other. Fujita gets to be an ass-kicker near the end of the match and takes down everyone to earn the victory! I remember when I use to not like Fujita, I was wrong. You know what? This was pretty damn fun. Kendo Kashin did not ruin it! *** 1/2

Marufuji comes out in his alter ego Magical Immortality guise. This, this was not my jam. Nothing about this clicked with me, noting gelled, it was a scrambled up mess of a match. Dull, boring, uninspired. A slog and a chore to watch. No one seemed to be hyped up or energized, no one seemed willing to even attempt to salvage any spark of joy or excitement in this match. After being entertained for several matches this was one hell of a derailment where no one looked good and no one gained anything. And alter ego or no alter ego that’s your world champion in there, I should be at least somewhat interested in what he’s doing, but instead, I ain’t interested in shit. The match picked up somewhat in the later stages of the match, but it wasn’t enough by then to get me back if it ever had me in the first place. After starting to get into the show this felt like a Nosawa Rongai low blow. Listless and lifeless, nothing about this is worth your time. Skip with extreme prejudice. *

If you don’t, why the hell are you watching this match? Grumpy tough old wrestling bastards doing grumpy tough old wrestling bastards things. Namely, beating the shit out of each other. Exactly what I expected, wanted, and got. These are two men who aren’t afraid to lay it in. They are two men who aren’t afraid to lean into it. These are two men who don’t care how much they are going to feel it in the morning, the afternoon, the evening. They just go to fucking town on each other with disregard to their physical health and it ABSOLUTELY RULES. The smacking sound that comes from body impacting body, forearm impacting face, chop impacting chest, can get to cringe level territory at times, and that doesn’t confront me any because it’s awesome. They grunt, and they scream, and within the first five minutes, you settle in for one stiff affair and prepare to be into every single moment of it.

Neither man can take a mile because neither man is willing to give an inch. That’s not to say they go 88 mph the entire match, but when the match does get up to 88 mph, you see some serious shit. They grunt, they gasp, they breathe heavily as they take in each other’s best shots. They scream and fire themselves up as they go back and forth. They kick, they chop, they punch, they stomp, two old weathered veterans going to war with neither intending to lose their championship. Both men wrestle, no, they FIGHT like the stakes are massive which for all intents and purposes they are. The crowd claps and gasps during this match and I’m clapping and gasping along with them. After the foul stench of the previous match, it is cleansed immediately by the main event.

This match feels like a legit battle, a struggle between two old titans not willing to back down and give up. Maybe it’s because they are tough, maybe it’s because they are stubborn, maybe they just don’t know any better, either way, we benefit from it greatly. This is what main event wrestling should feel like. This is what a double championship match should feel like. The most important thing of the evening. Blood is spilt, sweat goes flying, and bodies are battered. It’s tense and dramatic and as the match goes into deep territory time-wise, you don’t feel the time at all. Because you are too engaged, too focused, too entrenched in the action. By the end of it I was exhausted along with them. Two men, two champions, one tough old bastard left standing in the end. This is what wrestling excellent is made of. Make time to watch this, you will not regret it. ****3/4

Watch the main event. Go on, what are you waiting for? Go watch it! It is excellent. The undercard is solid if mostly unspectacular with some worthwhile stuff. The semi-main event is a waste of time and effort (what effort there was) and you need not bother with it. But seriously, do you want to watch two old bastards who refuse to back down and get into each other’s face beat the hell out of each other? Then watch the main event. Life is too short for bad wrestling, so spend the next nearly forty minutes of it watching it at its best. 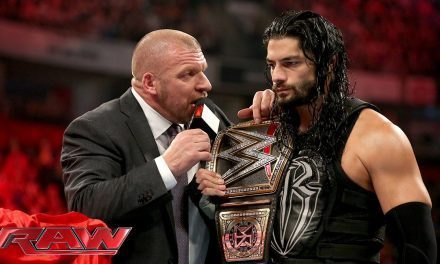 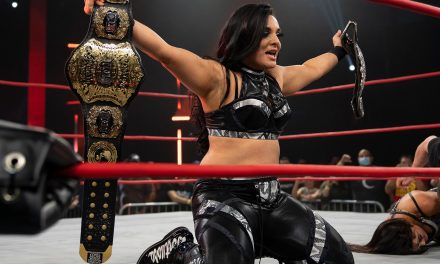 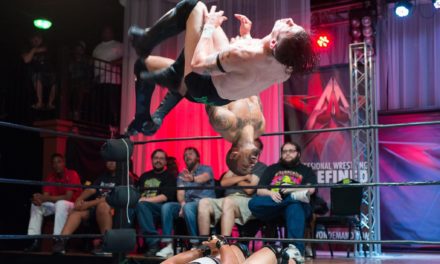