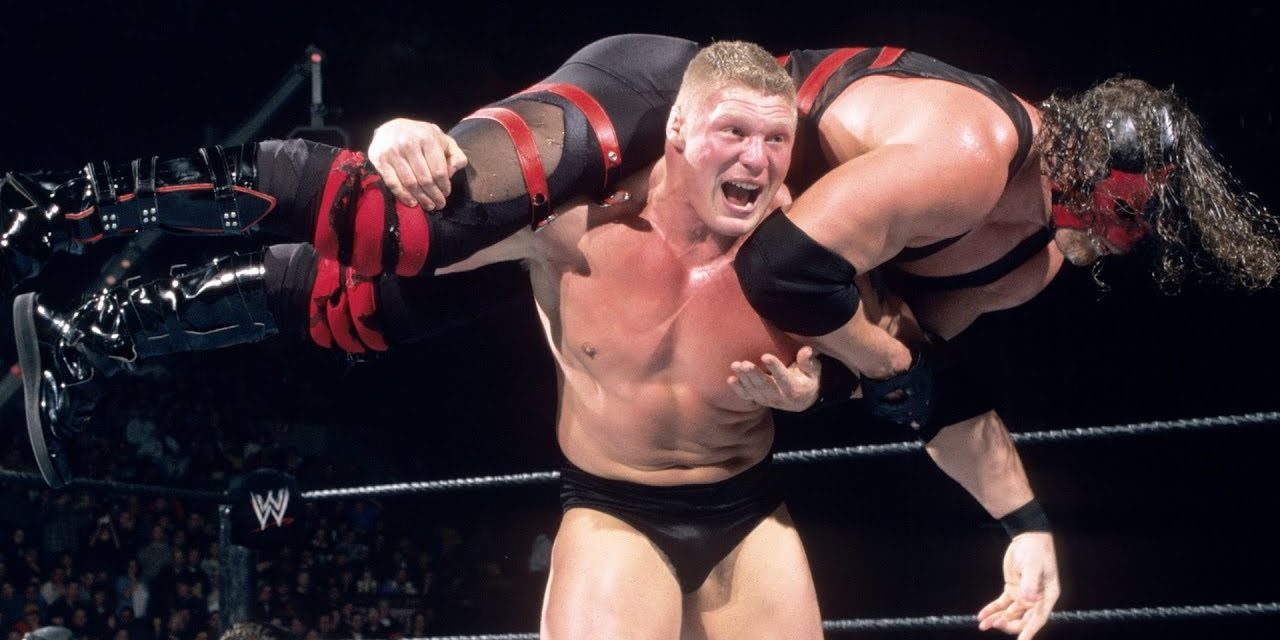 The broken ribs from Survivor Series were legitimate, as he had been hurt at a house show. He was also suffering from a torn PCL in his right knee, an injury that wouldn’t require surgery, but probably didn’t feel good when Brock was having to lift the Big Show at house shows every week. As Brock talks about in his book, life on the road was taking a very heavy toll.

“I was flying to a new city every night, drinking more and more vodka and washing down more Vicodins, all just to dull the pain. It got old real fast. I kept thinking to myself that I was living a life that my mom and dad wouldn’t want me living, and there was good reason for that.”

Between the Survivor Series in November and the Royal Rumble two months later, Brock would only log nine minutes of ring time on screen. Eight minutes and fifty-nine seconds to be exact.

“I had been popping pills for a while just to kill the pain of being on the road, of injuries that never heal, and I started drinking vodka. Lots of vodka. I can’t even tell you how much for sure, but it seems like a bottle every one or two days, with a couple hundred pain pills each month to go with it. You want to know why there aren’t more stories in this book about my pro wrestling days? Because the truth is, I don’t remember a lot of that period of my life.”

With Brock suspended from SmackDown, the WWE Title scene got very complicated. Kurt Angle became the #1 contender. With Brock’s help, he beat Big Show at Armageddon to win the WWE Title for the third time. However, on the next SmackDown, it would be revealed that Kurt Angle had Paul Heyman as his agent the entire time. I would go through the way that Heyman got Big Show back on his side after working both sides of the coin at the PPV, but it’s a lot easier if you just assume the Big Show is really stupid and easily manipulated.

In short, Heyman now manages both Big Show and Kurt Angle, and Brock is frozen out of the title picture. Unless of course, he can win the Royal Rumble.

Michael Cole called this one in his tactical turtleneck. The stage had falling rain in front of the Titantron, which is fun. This was more of what we got at Survivor Series, which was Brock dumping Show with suplexes. Show got some offense in, which slowed this down a bit. He went for a chokeslam, but Brock rolled through for a quick 2 count. Heyman got involved, and Brock almost got an F-5 on him, but Show goozled him and hit a chokeslam. It only got a two count, so Show got his hooters out and tried it again. Brock sent him into Heyman and hit the F-5 to score the win and get into the Rumble. **1/2

Brock would end up winning the Rumble match. With Angle retaining the WWE Title in a classic match against Chris Benoit earlier in the night, the stage was set for the SmackDown main event of WrestleMania: Brock Lesnar getting his long-awaited rematch for the WWE Title against Kurt Angle.

The theme song for this show was “Bring Me To Life” by Evanescence, so I’ll be humming that for the next two weeks. This was supposed to be a six-man tag, but Edge broke his neck like a real main eventer, so Lesnar and Benoit were short-handed. Behind the scenes, Paul Heyman pushed for the returning Rhyno to fill the spot, but that was nixed on the night. As Lesnar tagged in, Michael Cole said that he was like a linebacker. How right you were, Cole. Someone in the crowd was cackling like an old-timey witch whenever Brock got his hands on Angle early. Angle got Brock into a rear-naked choke early, which turned Brock into the shade of purple he’s usually in nowadays. Brock broke the hold by charging Angle into the turnbuckle, which left Angle favoring his left arm. Remember that for later.

What followed was a solid tag match between five of the best wrestlers in the company. All of these guys were great technical wrestlers, and they all had great chemistry that had been cultivated over years, both in and out of the company. That chemistry would help create an excellent closing stretch that started with an exceptional hot tag from Lesnar. Benoit would get back in and trade submissions with Angle before catching Haas in the crossface. Lesnar dropped Angle with the F-5 as Haas tapped out. ***1/2

With five weeks to go until WrestleMania, it seemed as though WWE was ready to go full speed ahead with Lesnar vs. Angle. And while that is our end destination, those five weeks were chaotic to say the very least. But that’s a story for another chapter.

Do you have any memories of this time in Brock Lesnar’s career? Did the WWE title picture in December 2002 make any sense to you? Let me know on Twitter, @SuitWilliams. 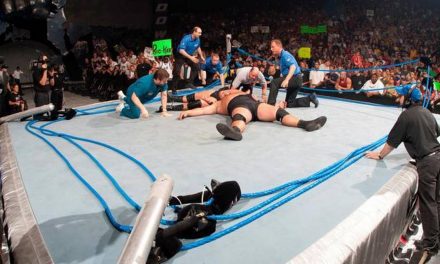