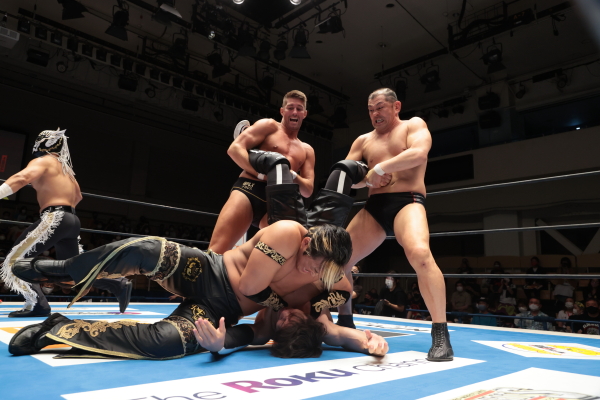 As July comes to a close, the Summer season and Summer Struggle still rolls on.

Today features the penultimate matches of Yota Tsuji and Yuya Uemura. After tomorrow’s Summer Struggle Show, these battle-ready Young Lions are going on their excursions. The card features five tag team matches, with the main event featuring a 10-Man Tag Team Elimination Match. A New Japan show in Kuroken is an ideal venue for a show like this. However, with still mandatory clap crowds and stiff competition in the form of Dragon Gate’s Kobe Pro- Wrestling Festival, today’s Summer Struggle show has a steep uphill climb to overcome.

As good as Makabe’s dub song is, I hope New Japan finds a way to use the Immigrant Song on NJPW World. Tsuji worked well in this. He looked good here as he withstood Makabe’s offense and Honma’s interference. He was on his own when Nagata was sent to the outside by GBH. Makabe put him away with the King Kong Knee Drop and the Boston Crab. The match was by the numbers, but the emphasis on Tsuji’s power, skill, and determination made for a fun opener. ***1/4

ELP complaining that his finger gun doesn’t make a noise like Chase’s is an amusing reference. Heel stable jumps the faces counter: 1. Here’s hoping they give Uemura some extra strength calamine lotion for all the back rakes he had to endure. Between that, the hair pulling, and Yano’s usual sports, this match felt a bit too reliant on comedy spots. To his credit, Uemura looked great in his one-on-one face-offs with Ishimori, ELP, and Owens. Like Tsuji, Uemura shined in defeat as he’s drilled to the mat with a Package Piledriver by Owens. Speaking of Owens, during and after the match, he continued trying to make Yano “I quit.” setting up the stipulation for Owen’s first KOPW defense. This match was a bit all over the place, but Tana was also good when he was in, and Uemura had great fire was shown by in the closing stretch. ***

Taguchi should always be wearing underwear when he wrestles, no exceptions. Wato and Eagles bookended the match with their strikes and high-flying skills. Wato gets a lot of flak, sometimes deservedly, but I enjoyed him here. Robbie is just fantastic, his mix of flying, striking, and grappling is always a thrill to watch. Tenzan and Okada had some fun moments together, the former bullying the latter with his strength. In a bit of comedy, Okada teased a Mongolian Chop and hurt himself trying to headbutt Tenzan. Taguchi, hip-attack heavy as always, was solid and worked well here. Tiger Mask wrestled in the match as well. This match had great action throughout. It culminated in Wato being the victim of Robbie Eagles’ Turbo Backpack and Ron Miller Special. ***1/2

Heel stable jumps the faces counter: 2. Both stables had their working boots on. BULLET CLUB didn’t start cheating until the end (Togo removing a corner pad early on being the exception). Between Naito and Yujiro, EVIL and LIJ, and Dick Togo being a good veteran worker when he’s not cheating as EVIL flunky, this match had a lot of natural chemistry. Sure, it eventually devolved into cheating with Gedo wielding the brass knuckles, but the attack didn’t land. When Evil and Shingo were the legal men, the crowd was clapping a little bit harder. I know I popped when Shingo knocked down EVIL with Pumping Bomber as Bushi put away Gedo with an MX. Solid action for a standard multi-man. ***1/4

Post-match, EVIL attacks Shingo with the IWGP World Heavyweight Championship and (shoot/accidentally) BRAKES OFF ONE OF THE SIDE PLATES!!! The thing isn’t even five months old yet, and it’s getting wear and tear?! I hope New Japan put a protection plan on it.

Heel stable jumps the faces counter: 3. This match was great. It started with Suzuki-Gun brutalizing Yoh for most of the match’s beginning. Yoshi-Hashi tried to save him but failed miserably and looked like a total geek. More or less saving himself, Yoh tagged in Goto and leading to him, Yoshi-Hashi, and Dangorurus Tekkers, getting eliminated quickly and setting up their upcoming match.

Next came Ishii and Suzuki, and holy crap, this was awesome. These men were punishing each other just like the good old days. Hitting each other with elbows for over a minute, taunting each other, Suzuki teasing the Gotch but Ishii fighting out. YES! Eventually, Suzuki wrecked Ishii on the outside with a chair and got them both counted out. Suzuki’s crazed look, freaking out on Despy, crying out for “ISHII!!!”, and being dragged to the back by the Young Lions TWICE, was just the best. Add Ishii going to confront Suzuki with another chair minutes later, and this WAS the match. Kanemaru eliminated Sho, ramming Yoh into him, and then he and Despy just destroyed Yoh giving Suzuki-Gun the win. While this match went a bit long, it was a well-worked contest from start to finish. The highlight was Suzuki and Ishii’s mini-match within all this action. I loved every bit of that, and I got to go with my gut. ****

In a vacuum, this was a fun watch. But with Kobe World, the Olympics, the length of the tour, and the show having no real stakes, it is destined to get overlooked. 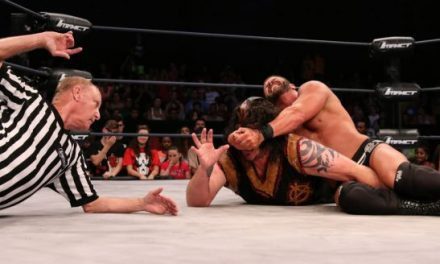