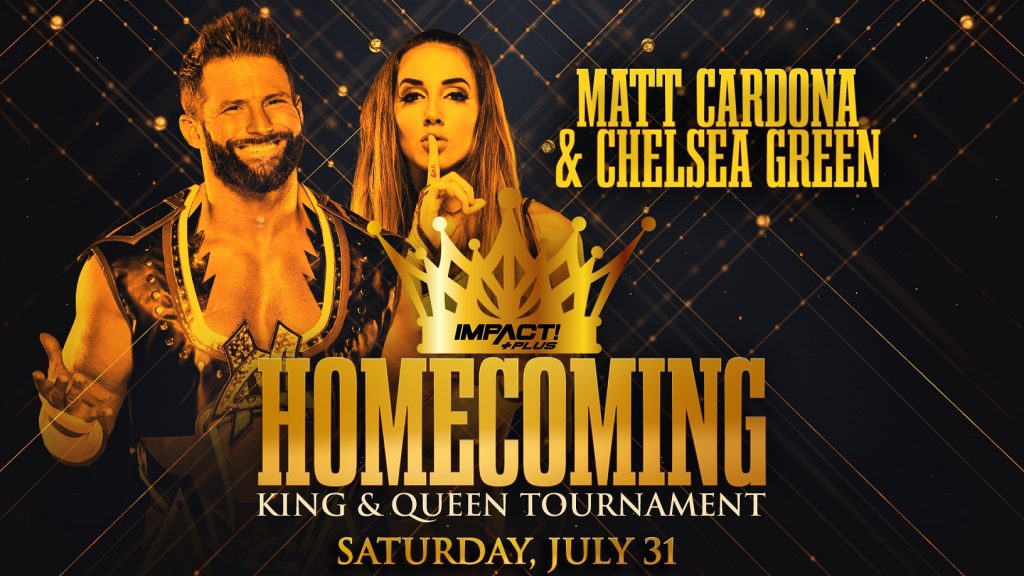 Homecoming is built around a one-night, eight-team mixed tag team tournament designed to crown the promotion’s first-ever Homecoming King and Queen. Impact’s website specifically refers to it as mixed tag, so I’m assuming those rules will be enforced, but they are also partial to intergender action. Time will tell. The bracket is below: 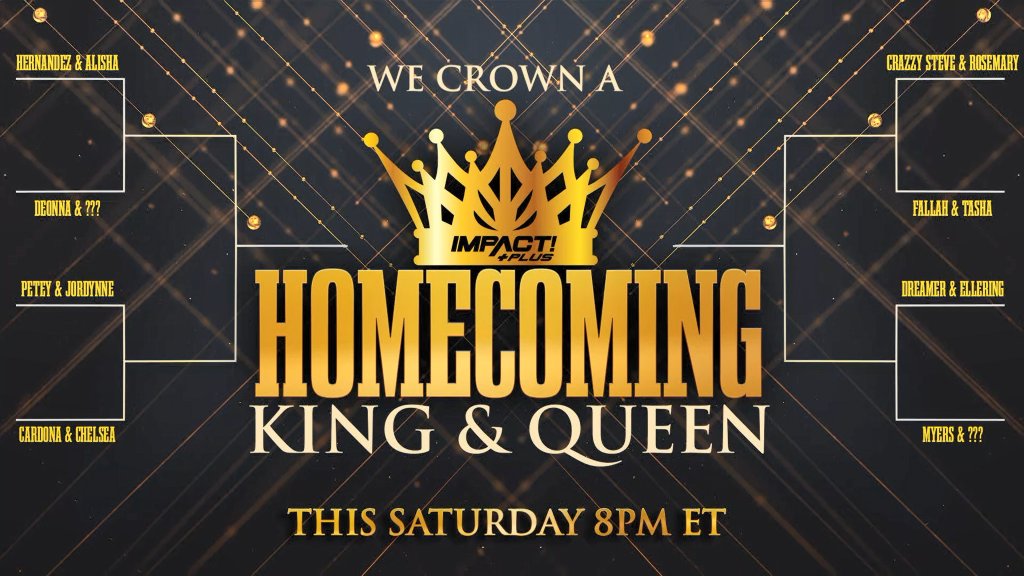 On paper, the obvious booking direction is for Deonna Purrazzo and her mystery partner to win the event. Purrazzo is heading into an important August as Knockouts Champion, representing the promotion at both NWA Empowerrr and AAA’s TripleMania (in a title vs title match against Faby Apache). As such, she needs to be kept strong and it would give her partner, almost certainly a new face, an immediate shot in the arm.

When this tournament was initially announced, Matt Cardona and Chelsea Green seemed a shoo-in to win given that the latter’s being treated like a big deal on her return (much to Joe Lanza’s chagrin) and Cardona has been a consistently featured act. That said, I don’t think they need to win it and going out in the semi-final round would seem the right placing for them.

On the other side, things are a little interesting. Rosemary is now one half of the Knockouts Tag Team Champions and having her eat a fall on this show would likely help set up the next challengers for her and Havok. As such, I see her and Crazzy Steve losing before the final to either Fallah Bahh and Tasha Steelz or Rachael Ellering and Tommy Dreamer. Given that Steelz is in the midst of splitting from partner Kiera Hogan (who has now left the promotion), putting her immediately back in the title picture makes little sense. As such, I see Ellering and Dreamer beating Rosemary and Steve in the semis before losing in the finals, setting up Ellering and Jordynne Grace for another title shot in the coming weeks.

The only other mystery in the tournament is Brian Myers’ partner. Tenille Dashwood’s alliance with him is done, so it won’t be her, but the go-home show indicated the direction he was going in. He tried to go for former ECW regulars Beulah McGillicutty and Francine but had no luck. As such, I think it’ll be a blast from the past – Missy Hyatt tweeted that she’d been at the recent tapings, so it could well be her. Joy.

Two non-tournament matches are also scheduled for Homecoming, likely slotted in after the quarter and semi-finals. Eddie Edwards and W. Morrissey will meet in a Slammiversary rematch, while Josh Alexander makes the fifth defense of his X-Division title against Black Taurus.

Edwards and Morrissey had a fun match at Slammiversary that saw Morrissey come out on top thanks to a chain shot behind the referee’s back. That, and the backstage brawl they had on the first show after Slammiversary set the stage for this weekend’s hardcore match. As much as it pains me to say it, I’m pretty sure Morrissey’s unbeaten start to life in Impact comes to an end on Saturday night. The stipulation seems perfect for Edwards to get his win back and he’s ultimately the man who needs it more right now – he main events next week’s Impact alongside Sami Callihan and Frankie Kazarian in a trios match against Kenny Omega and The Good Brothers. As such, he should be going in strong on the back of a feud-settling win.

As I’ve written numerous times on this website already in 2021, Josh Alexander is killing it right now. He’s producing the best work of his career and has been central to the X-Division hitting the sort of heights it’s not found in years. On paper, him against Taurus, one of the most physical, entertaining luchadors out there, should be a lot of fun. Taurus doesn’t have great stock in Impact right now though, coming into this on the back of three straight singles losses. That makes the match feel a little out of place, and takes any remaining drama out of the result. However, I have the utmost faith in both men to deliver a banger with whatever time they’re given and steal the show. Maybe they’ll even make Impact sit up and take note of what they’ve got in Taurus…

I’m always in favor of promotions doing different things. Well, maybe not always as I’m a raging cynic, but most of the time at least. Just two weeks out from Slammiversary, doing a regular monthly special here would have felt out of place and would have necessitated burning through a lot of the things they’re working on in the weekly TV. Instead, we get a little tournament that, while probably not likely to produce any in-ring action to write home about, should be fun and lead to a couple of other things, as well as two higher-end singles matches. 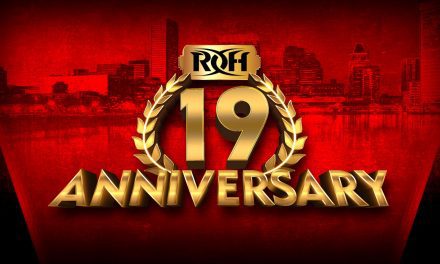