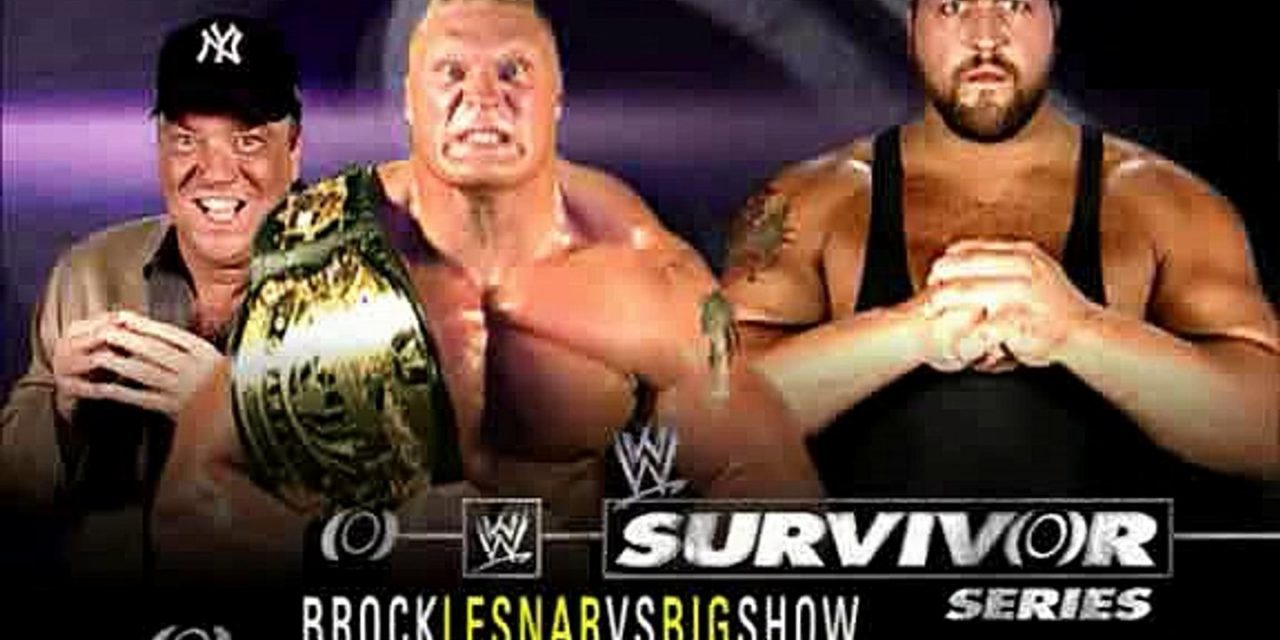 Two words most people with knowledge of WWE’s inner workings are familiar with. Most times that’s due to the head writer of the weekly episodic programming having the attention span of a goldfish, but it would be another reason that changed plans for the WWE Champion in October 2002. Brock Lesnar had just come off of a star-making win at No Mercy, and was headed to Madison Square Garden to defend the WWE Championship in one of two major main events. The Raw main event would go as planned, with Triple H defending the World Heavyweight Championship inside the debuting Elimination Chamber. The plan was for the Smackdown main event to be Brock Lesnar defending the WWE Championship against the man whose blood stained his chest months before, the returning Hollywood Hulk Hogan.

It makes all the sense in the world. Hogan coming back and looking for revenge on the new monster that took him out months before.

It’s a classic Hogan story, just look at what he did with Earthquake back at Summerslam 1990. This time, however, Hogan would come up short as the Next Big Thing would finish the job he started in August and take down Hulkamania in the building where it was born in 1984. Unless you remember Hulkamania actually starting in the AWA the year before that, but whatever. Brock Lesnar was going to beat Hulk Hogan in a Madison Square Garden pay-per-view main event, and be solidified as the top guy in the WWE.

Hulk Hogan had an allergic reaction to doing the job, brother. The November 11, 2002, Wrestling Observer Newsletter goes into more detail. Hogan was to come in and do the job for Lesnar, which would serve two purposes. One, it would continue Brock’s megapush at the top of the company. And two, so WWE could promote Hulk Hogan’s autobiography, which the company would get a share of profits. Instead, Hogan and Vince McMahon would have a falling out “similar to the Austin break-up, but a non-public version of it.” It’s interesting how the megapush of Brock Lesnar led to Vince McMahon falling out with both Stone Cold and Hulk Hogan. Is it Vince putting all of his eggs in the Brock Lesnar basket? Would these fallouts have happened anyway, and Brock’s push just accelerated the process? Is it Vince rushing to make a new star in the face of sagging ratings? Raw had just run the Katie Vick angle to a paltry 4.34 million viewers, the least-watched Raw in nearly five years. (Quick aside, but imagine the bodies Vince McMahon would bury to get 4 million people to watch Raw again.)

We may never know how things would have shaken out if Austin and Hogan agreed to lay down for Brock. But what we do know is that Brock Lesnar goes from beating Hulk Hogan in the building where Hulkamania was born, to wrestling a microwave-heated Big Show, coming off of a lackluster run in the ill-fated, Shawn Michaels-led NWO reboot on Raw. From the penthouse, to the outhouse indeed. The build to this match started the Smackdown after No Mercy.

Big Show opened the show by attacking Rikishi and calling out Brock Lesnar in the most Smackdown: Here Comes The Pain promo you’ve ever heard. Later in the night, in a truly atrocious segment of television, the Undertaker took five minutes to spit out that he ‘spected Brock Lesnar. Lesnar then threw Heyman under the bus, hinting that messing with Taker’s wife was Paul’s idea to give him an edge in the feud. Lesnar and Heyman leave while You’re Gonna Pay plays. Then, Big Show came out and called Taker a has-been, which made Taker call Show a giant that never was. What followed was, and I swear this actually happened, Undertaker and Big Show essentially playing Red Light, Green Light up the ramp before Big Show finally threw Taker off the stage. Sometime later, Big Show barged into Brock’s locker room, where Paul Heyman tried to reject his challenge. Instead, Brock shoved Heyman out of the way and accepted.

If that sounds like a lot, that’s because it is. They ran through a month of angles in one night, all so the Big Show could feel like a credible challenger for Brock. And that’s the dirty little secret about the Smackdown Six era. The Smackdown Six were all tied up with each other and the brand new WWE Tag Team titles. If Kurt Angle or Chris Benoit were freed up, they would easily be able to slot into this spot and give Brock a big feud. Instead, we get a rushed push on a guy who isn’t over. But hey, you can always tell us that he’s 7 foot tall, and five hundred pounds!

This was a fun encounter on the build to Survivor Series 2002 that no one would think would have been rematched 17 years later at Survivor Series 2019. Rey flew around and tried to stay out of Brock’s hands, but eventually, Brock got a hold on him and busted him up. Brock missed a charge and hit the post, and Rey got a 619 to the gut. He set Brock up for a 619 proper when the Big Show shows up, catches Rey in the ropes, and GORILLA PRESSES HIM INTO THE CROWD. Then he chokeslams Brock through the table as Smackdown fades to black. For everything bad I’ve said, Big Show tossing Rey into the fifth row is dope as hell. Heyman always knew how to make memorable moments with his giants. You would want more out of this seeing the names on the page though. **1/2

Can Brock Lesnar F-5 the Big Show? Could Michael Cole possibly ask this question anymore? We get it, it’s gonna be hard to get that lard ass up. Brock came out without Paul Heyman, as Heyman was tired of Brock not listening to him. This was a nothing match, just to get Brock on TV and get to the post-match angle.  That post-match angle being Big Show attacking Brock and pressing him off of the stage just like he did to the Undertaker. As far as the match goes, I think these two have a better match in them. **

Brock came into this one with a legitimately broken rib. The announcers attribute it to the stage attack, but the Observer says it happened at a house show. Big Show and his Wranglers are here. Sizeable pop for Brock’s music, the first time I can say I’ve heard that. A big Let’s Go Lesnar chant rocks MSG, just like it did in Nassau Coliseum at Summerslam. As it turns out, Brock Lesnar is a strong mofo. He took down Show with a double leg, hit him with a back suplex, a German suplex and an overhead belly-to-belly suplex. Brock bumped the ref before the belly-to-belly, so Heyman tossed in a chair. Brock drills Show with the chair and hits a massive F-5. Replacement ref comes in and counts one, two…before Heyman pulled him out and dropped him with a punch. Lesnar was pissed, but Big Show cut him down with the chair and chokeslammed him on it to win the title. As far as the match goes, it’s a fun time. Brock is legitimately over, and he just bullrushes Big Show for 3 minutes before the turn happens. And the turn lets Brock chase for the title, and as we all know, the money is in the chase. The only downside is that now the title is on the Big Show. As good as a five-minute match with a fuck finish will ever get. ***1/2

Brock is on the road back to the WWE Title, which just so happens to coincide with the Road To WrestleMania. But as we’ll get into in the next chapter, that road was starting to own the Next Big Thing. Got any memories of this time in Brock’s career? Were you a fan of the Big Show and his Wranglers? Let me know on Twitter @SuitWilliams. See you next time. 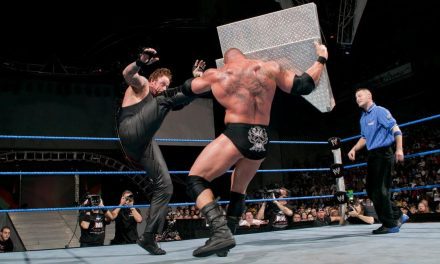