This week on Wrestling Omakase we once again take a completely randomized look at events from the Tokyo Dome!

The Wrestling Omakase Patreon is your best source for coverage of Japanese wrestling, from yesterday and today. Patrons get so much bonus audio that never hits the free feed, most notably two full length exclusive episodes per month. Right now we’re in the middle of our series looking back at every Tokyo Dome main event in order- we’re in 1995, in the midst of the memorable NJPW vs. UWFi trilogy. We break down the main events in detail but also go into lots of other notes and memorable moments on each and every Tokyo Dome show! Plus, our most recent Patreon exclusive full episode recapped both NJPW Summer Struggle in Sapporo shows in detail, plus previewed the upcoming WRESTLE GRAND SLAM in Tokyo Dome event and more! You can also listen to all of our previous audio, including our various rivalry series (Okada/Tanahashi, Naito/Ishii, Naito/Tanahashi), our series reviewing matches submitted by Omakase patrons, ANIME OMAKASE, and much more. You can get access to all of this and even more right now for only $5 at www.patreon.com/wrestlingomakase!

John is joined once again by returning guest and longtime friend Bryan Quinlan (@IM_NOT_QUINLAN). They start by apologizing for the fan in the background, which is quite loud, but it felt like 100 degrees in New York City when they recorded this and they didn’t wanna die of heatstroke. They then get into the reason why they’re here, breaking down six different randomly selected matches from six different randomly selected Tokyo Dome shows, in our second episode talking random Dome matches! They have six entirely different Dome shows from the last time around, so here’s the full list of matches covered on the episode in order:

Topics that come up along the way include: boy did we not expect to watch a WWF match on this, three people involved in this match are dead (and one of them is a pedophile), the iron claw is over at least, Kanemoto is a jerk, Liger doesn’t sell the leg, why did they bother with this IWGP title tournament, Kawada and Tenzan just beat the absolute piss out of each other, everyone wanted to see Misawa vs. Mutoh but this is the best we got, some history on Taiyo Kea, this man looks nothing like Kazuchika Okada, how did Okada tear himself away from that TNA excursion to do this match, what in god’s name is wrong with Low Ki, and finally: three ways are still bad. 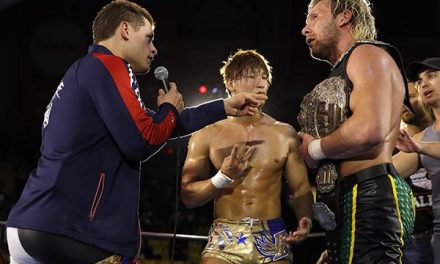