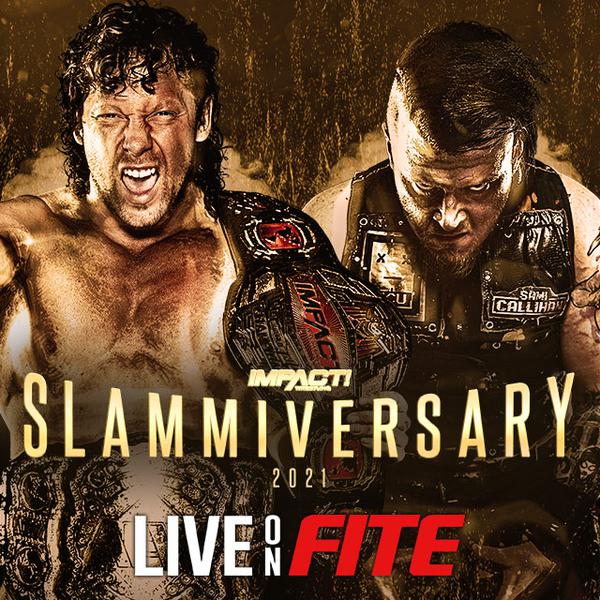 Impact Wrestling’s biggest show of the summer, Slammiversary, emanated from the Skyway Studios in Nashville, Tennessee this Saturday (July 17), headlined by Kenny Omega defending the Impact World Championship against Sami Callihan in a No DQ match.

Coming in at just under nine minutes, this was a fun little match and great for its slot on the pre-show. The crowd seemed to love the Decay team, showing that the freaky, supernatural stuff is still a draw despite a global pandemic. Oh well, each to their own. Havok ended Fire N’ Flava’s second run with the belts with a piledriver in the middle of the ring and judging by the crowd reaction, the title change was the right call. **3/4

We had fans. In the building. Popping for great X-Division action. Just like the vaccine, you can inject that directly into my veins.

I absolutely loved this. Bringing out the Ultimate X gimmick for the first time in two years made it feel fresh and exciting and the six guys killed it, trying a lot of new, creative stuff. I’m not completely sold on the logic of a six-person submission hold in a match where you need to climb a structure to win but I was here for it.

As is tradition, Rohit Raju was a treasure, trying a variety of innovative ways to grab the belt without having to clamber across the ring. Josh Alexander got to show off his stiff striking and power offence, while Petey Williams got to hit not one, not two but three Canadian destroyers. Some cynics might call it overkill but for the first big match with fans back, I say why the hell not.

Around the midway point of the match, Matt Striker referred to Chris Bey as Euclid in boots and it struck me – while I never thought I’d say this, I’ve missed him over the last few weeks.

Having produced somewhat of a team effort to unhook the belt, Alexander and Bey were hanging upside down battling over its sole possession. Ace Austin tried to springboard in and steal the gold but the other two pulled up, leaving him to sail across the ring empty-handed. Alexander then landed one final chop and knocked Bey down, grabbing control of the belt and retaining his title.

I was shocked after the entrances at just how over Sam Beale seemed to be. It was a small sample size but fair play to the kid. Also, a word has to go to Kaleb, who is living his best life right now and made the most of being dressed like an absolute fool.

Unsurprisingly, the surprise partner for Cardona here was his fiancé Chelsea Green, returning to an Impact ring for the first time in three-and-a-half years. The match was a pretty bog standard affair, with Myers working over Cardona at the start before Green got the hot tag. We got a callback to the spot on Impact two weeks ago when Dashwood laid Cardona out with a low blow, with Cardona this time wearing a cup. Just like a boy scout, Cardona is ‘Alwayz Ready’… Anyway, he piefaced Myers with the cup, allowing Green to hit Dashwood with the Killswitch for the win.

Solid, inoffensive stuff that the crowd liked. Cardona and Green finished by posing in the ring, a la Randy Savage and Miss Elizabeth all those years ago. **3/4

I might well be the high man here but I was a big fan. It felt like the natural evolution of the rocket push they’re giving Morrissey. He threw everything that had worked before against the jobbers, as well as Rich Swann and Willie Mack, but it didn’t put Eddie Edwards down. Eddie, who the crowd loved, threw back more than any of Morrissey’s opponents had done and it had the big man rattled. After rolling to the outside after taking a Boston Knee Party, Morrissey freed a chain from his boot, clocked Edwards with it and then put him down with a big powerbomb to maintain his unbeaten streak. But they’ve shown weakness now, and that makes him story all the more compelling. ***1/4

FinJuice are back! Scott D’Amore made this match after Fulton and Shera threatened referee Daniel Spencer as a result of being barred from ringside for the PPV opener. It was cool to see FinJuice back in Impact and they got a 70-second squash win here, giving them a positive start to their return. Squash

Outside of the main event and the mixed tag, this match seemingly had the most obvious conclusion coming in. Moose, now under a new contract, gets back in the win column after ending his rivalry with Sabin in a great singles match. Simple, effective booking. My complete convincement of that outcome made the finish here all the more surprising.

Moose, who came to the ring dressed as a glammed-up Roman Gladiator, turned in a typical ‘Big Match Moose’ PPV performance, moving with great urgency and making every high spot count. Sabin, in his first big time singles match in years, looked great too and they told an effective story. Sabin targeted the legs of Moose with repeated dragon screws in an attempt to slow him down, while also countering the bigger man’s power with his own quickness.

After surviving a flurry of strikes from Sabin on the outside, Moose powerbombed him on the apron and then brutalised him by repeatedly swinging him into the guardrails on the outside. From there it seemed a formality that he’d win, and Sabin’s rollup attempts after beating the count represented little more than final hope spots before a big spear. However, the third one, the victory roll, got the job done and stunned both me and the live crowd.

There’s definitely more meat on the bone here and scope for a rematch, especially with Moose seemingly being cycled down the card slightly for the time being. ***1/2

On Saturday morning, it was announced that TJP was out of this show and that Bahh would be having a surprise replacement. To my mind, the move had big Forgotten Sons energy to it – I could totally see Impact saying that Steve Maclin had taken out TJP before the show, before Blake wiped out Bahh on debut to make them a whole new team in the match. Instead of that, we got No Way Jose, now billed as No Way (eurgh), along with his conga line.

Yeah, that debut did absolutely nothing for me and aside from a hot closing stretch, this match didn’t either. It felt like a TV defence for the most part and the champs were barely involved. Rhino looked set to retain on Jose thanks to a Gore, but Karl Anderson cut him off with a Gun Stun and a blind tag from Doc Gallows allowed The Good Brothers to hit a Magic Killer and secure the titles for a second time. **3/4

So, TBA was none other than former NWA Women’s Champion Thunder Rosa and I have to say, that was a properly good surprise. Her technical style matched up nicely with Purrazzo and these two had a really good, back-and-forth match. Rosa got a lot of offence in and often seemed one step ahead of the champion, which matched the story they were going for that the surprise opponent had caught Purrazzo off-guard and for once put her on the back foot.

After reversing Rosa’s second attempt at the Fire Thunder Driver, Purrazzo retained her title with a snap Queen’s Gambit piledriver. Throughout Purrazzo’s reign (and also that of Josh Alexander), Impact have done a great job of getting two finishers over for her, which is always a positive move because it gives nearfalls and holds much more credibility. ***1/2

Post-match, the refrains of Hardcore Country blared and Mickie James hit the ring. She praised Purrazzo and offered her a spot on the NWA’s women’s special, Empowerrr. Purrazzo, who moaned that James was stealing her moment, pushed the former Knockouts champion and asked her to take her trash bag with her out of the ring. James put the champion down with a superkick, presumably sowing the seed for a match between the two in the coming months.

Coming into this match, one of my concerns was whether Sami Callihan could deliver an in-ring performance to match the spot he was in. To be frank, he hadn’t had a ‘great’ match in the ring in quite some time and if you’re not having great matches with Kenny Omega, you’re doing something wrong. When all was said and done, Callihan produced his best performance in three years and made this match as good as it could have been.

Throughout we had great physicality, and the blood pooling out of Callihan’s face made for the perfect visual. Despite everything, he was the fiery, convincing babyface that Impact needed him to be here and the use of plunder added a level of believability that surprised even me.

We had pizza wheels across the face, backbreakers on bins, Callihan stabbing himself with a fork as a means of firing up, piledrivers and powerbombs through tables and tombstones onto barbed-wire chairs. The crowd were absolutely with Callihan throughout, which made a world of difference, while Don Callis was a treat of commentary. His constant involvement and disparagement of Callihan did what it was supposed to do.

Even the ref bump and attempted interference from The Good Brothers worked. It affirmed that even in his wheelhouse, the deck was stacked against Callihan. When you’re expecting that stuff, it’s not an issue. His package piledriver and Brian Hebner’s slow count genuinely popped me, which is a testament to the story they managed to tell.

Kenny, who Don billed as the ‘King of the Deathmatch’ before the opening bell, finally pounded Sami into submission in the same way he does everyone else – a plethora of V-Triggers and an One-Winged Angel. The champion studded his knee pad with tacks and flew across the ring with the ferocity the occasion demanded. He shoved the tacks down Callihan’s throat and thrust his knee into his face once more. Then came the death blow, the One-Winged Angel, but by then it was academic. ****1/2

Post-match, Omega, Callis and The Good Brothers celebrated in the ring until the lights went out. Cue JAY WHITE to hit the ring. Just as someone else rushed to the ring, the broadcast ended, so I guess we’ll have to tune in on Thursday for more…

.@JayWhiteNZ HAS ARRIVED AT #Slammiversary!

Buoyed by the return of fans for the first time in almost 500 days, Slammiversary was a great offering from Impact Wrestling. The low point was probably the tag title match but even that was solid, with everything else ranging from good to great. The Ultimate X opener was note-perfect and well worth your time, while the main event overdelivered on my expectations and figures to be among Impact’s top three matches of the year when all is said and done. Thumbs firmly up. 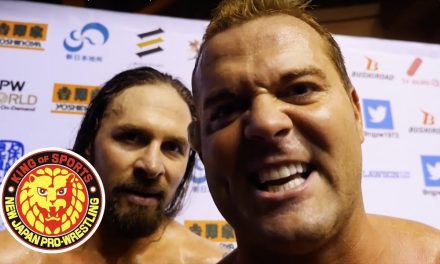 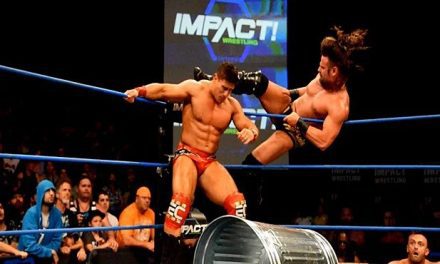 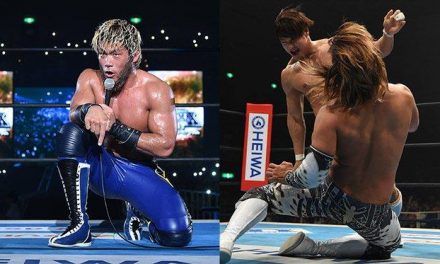 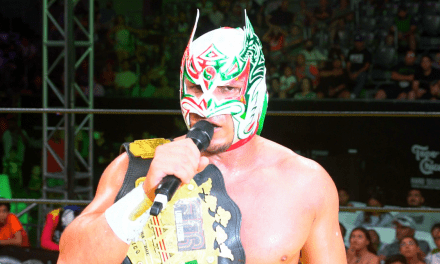