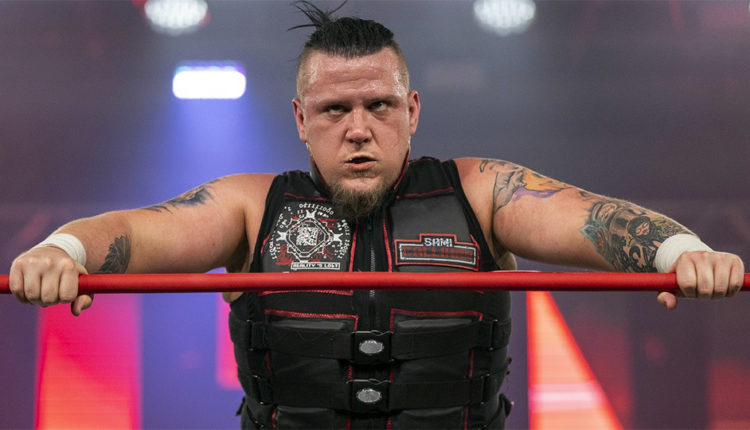 I don’t know whether Sami Callihan was originally supposed to be in the Slammiversary main event. I mean, he’d hardly have been my first-choice for Kenny Omega’s first Impact World title defense in front of fans.

Perhaps, if they hadn’t been worried that he’d leave when his last contract expired in June, Moose would have been the guy here. Perhaps he’d have been the ‘final boss’ for Omega.

There’s a lot of ifs and buts and maybes there. Maybe Sami was the plan all along for Omega at Slammiversary, a solid stepping stone defense as he rumbles onto bigger matches in front of (hopefully) bigger crowds throughout the rest of 2021. And, as uncomfortable as I am with him being in this spot, Sami Callihan will challenge for the Impact World title this weekend in the Slammiversary main event.

Realistically, he was always going to be someone that challenged Omega during this run at some point. He’s been with the promotion for close to four years and has almost always been a featured, or heavily featured, act. He’s a former World Champion, and he’s someone they’ve trusted with PPV main event spots before.

He’s always billed himself as “The Draw of Impact Wrestling” and that’s important, because in any match with Omega, the ‘outsider’ champion, the Impact talent involved will have to be presented as the Impact savior. He can stay as a heel and maintain his own arrogance, but also run with the gimmick that he’s the hero the promotion needs.

Also key is that Callihan almost always loses in the big spots. He’s won some but by and large, he comes up on the losing end. Indeed, he lost the title match in the 2019 Bound for Glory main event, eventually picking up the World belt in Impact’s debut on AXS TV.

All of those are storyline devices for building towards this Saturday’s match and they’ve been utilized to varying degrees. But none of them have been the main thing. No, that’s been his in-ring style and general antics within the promotion. They’ve channeled their presentation of him as this unhinged, violent and unpredictable individual as the key factor in this match.

There’s been no illusions that this will be like the Rebellion main event, where Rich Swann and Kenny Omega were compared as near equals in a match that had a proper sports-like presentation. No, ever since Under Siege when The Good Brothers took Callihan out of the main event, Kenny and Don Callis have tried to wheedle their way out of wrestling Callihan. Yes, they’re heels and they should do that now and again, but there’s a more detailed presentation than that.

They’ve not tried it because Kenny thinks Sami is a better wrestler than him, because he knows he’s not and we’ve been told as much. No, they’ve sought to avoid wrestling Callihan because they don’t trust him. They see him as depraved and capable of springing surprises. He’s not a conventional opponent like a Swann or an Edwards that you could prepare for. Callihan has always taken his Impact feuds too far; all feuds Callis presided over as Vice President.

When he knew LAX had the beating of oVe, he made things more violent. When he knew Pentagon Jr. was better than him, he tried to steal his mask and get under his skin. When he wanted Rich Swann’s X-Division title, he used their tied backgrounds as a form of emotional torture. Callis doesn’t want his charge to face Callihan, at least from where we’re sitting, because he knows that he’s prepared to do pretty much anything in pursuit of victory. And that’s something you can’t gameplan for.

As cringeworthy as it may have been, Callis’ staged arrest of Callihan involving John E. Bravo and Johnny Swinger was a great bit. It paid off a past segment, where Swinger got into sizeable debt with Callis over the Rebellion main event and was met with a “you owe me a few favors” when he couldn’t pay it back, and it also tied in Callihan’s assault of Callis back in 2018. He was able to speak from experience about the depths Callihan was prepared to sink to and why he was a wholly inappropriate opponent for the promotion’s World Champion.

It also added something to Omega and Callihan’s contract signing, one of wrestling’s most typically banal segments. Sami got the triumphant babyface moment and ended the show standing tall after laying Omega out with a package piledriver and then a powerbomb through the table. It showed Callihan had even more reason to be mad and perhaps was even more dangerous.

On the whole, the story has been pitched right. They’ve not just jettisoned all of Callihan’s canon and made him this white meat babyface. Instead, they’ve shown him to still be a dislikeable individual but he’s a dislikeable individual with reason to be aggrieved after being screwed over consistently by The Good Brothers, Callis and Omega. Indeed, maybe his unpredictability and inherent danger is what the promotion needs to claim its title back from the man who’s better than Gotch, Bockwinkel and Hackenschmidt.

In addition to my personal reservations about Callihan being anywhere near this spot, I would contend that there are two major issues with him in this spot. The first is that the most effective payoff to this story would be if the Slammiversary main event had some form of gimmick/stipulation. At the moment it doesn’t, but that might change on the go-home show. If it did, it’d play into Callihan’s deathmatch stylings and take things further away from Omega’s comfort zone. It’d give Don even more reason to be concerned about what might happen when the bell rings.

Additionally, it’d also help them deliver the best possible match. Callihan’s style has never had a particularly high ceiling but most of his best work has been done in variations on a No DQ match. They reduce the tiresomeness of the walk-and-brawl by giving you the premise of three or four high spots. His early work in Impact, particularly the classic with Pentagon Jr., showed that.

That’s even more the case now, when he’s coming off an 18-month period in which his matches, including the big PPV ones, have been decidedly average *** specials. Perhaps the fans will take it to another level but one suspects that Kenny would need a stipulation to get the best from Callihan.

The other issue is that, for all the good I think there’s been in the story, there’s seemingly a close to zero chance Callihan becomes a two-time champion on Saturday night. The timing doesn’t feel right for Omega to lose and Callihan doesn’t feel like he’d ever be the right person to dethrone him. That will take something away from the match I’m sure, but at least Callihan is going in with a very well-booked story behind him.