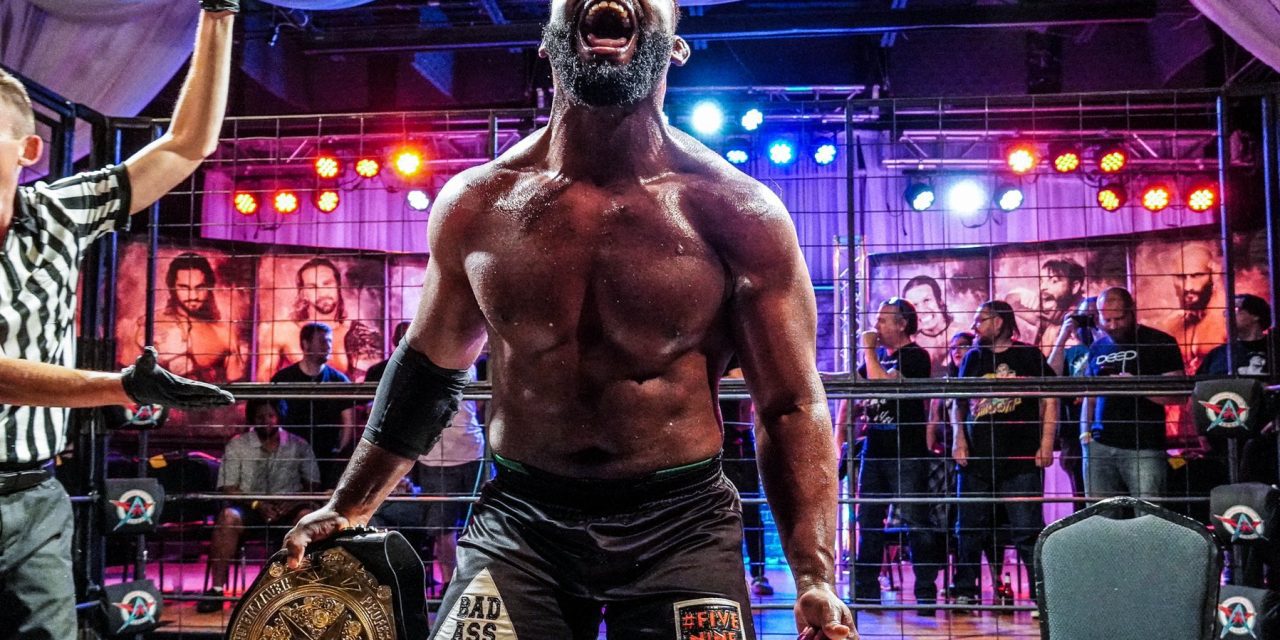 After a three-month absence, Jake Crist returned to AAW to take on one of the promotion’s many muscled-up monster-among-men-types. Crist got in way more offense than I was expecting, largely working a cat-and-mouse game with his bigger opponent while the announcers put over that Crist was in the best shape of his life. In fairness, I believe that is true. Crist looks much lighter than when he was a focal point of the promotion alongside Sami Callihan. He could only do so much, though, as he eventually succumbed to Schaff and his reverse swinging neckbreaker in nine minutes. **1/2

AAW showed a great hype video for everything that was to come on United We Stand.

I continue to be baffled by the fact that Ace Perry isn’t working on TV anywhere, especially now that he’s been saddled with Xavier Walker and his muscles. Outside of singles matches against Jimmy Jacobs and DJ Z years ago, I did not see a bigger name on Ace Perry’s Cagematch profile than Laredo Kid. This was certainly the biggest opportunity Perry has gotten in AAW and just as he has done all year, he delivered.

This had the intensity of a G1 sprint but with the recklessness of something you’d see in Arena Naucalpan. Laredo, while on the elevated stage, whipped Perry into the ropes and on the rebound, caught him with a Spanish Fly on the hardwood. Perry would later get revenge by Falcon Arrowing the Mexican import onto the stage in a truly gnarly and jaw-dropping spot.

Laredo survived interference from Walker in the midst of his comeback, eventually turning his back on Perry and diving onto Walker who was positioned on the floor outside of the ring. Another maddening spot.

He rode that wave of momentum into connecting with a Reverse Spanish Fly onto Perry for the win. This was beautifully compact and highly enjoyable. ***1/2

In the opening contest of #UnitedWeStand Laredo Kid was victorious over Ace Perry in what was a fast paced, high flying battle!

I vastly preferred what these ladies did in April compared to their output on this night. I don’t think this match was bad – live reports certainly led me to thinking it would be worse, but it also wasn’t good or engaging in the way that their prior interactions were. Hyan held up her end of the bargain. Outside of a slipup in which she stared directly at Blue before Blue was supposed to catch her with a surprise dive, Hyan showed off enough intensity and physicality to get the stipulation over.

There was something about Blue’s performance that was too friendly. She had been put through hell by Hyan in recent months and I didn’t believe that she actually wanted revenge in this match. Instead, she threw her wildly inaccurate spin kicks and gently transitioned from spot to spot. There was no fight. There was no urgency. Skye Blue looked like she was playing pro wrestler in this match.

She did pick up the win via submission just after the 8-minute mark, however. One thing I did like about this match is that the referee did not overstep his boundaries and ask each woman if they wanted to quit after any basic offensive maneuver. Instead, he largely stayed out of it and called for the bell after Hyan gave up. **3/4

I’m still in awe of Alexander’s performance last month against Mat Fitchett. This was a fitting follow-up as Alexander bailed on whatever technical prowess he showed off last month, instead choosing to simply slug away on the bigger, meaner Jake Something in what turned out to be yet another thrilling Josh Alexander bout in AAW. He has a knack for these things.

I have long made fun of certain wrestling reviewers for fixating on punches the way they do. It’s a dorky, almost troll-like crutch that some reviewers lean on and I have no patience for it. With that in mind, we have to talk about Josh Alexander’s punches. Every strike he throws looks debilitating towards his opponent. He throws a mean straight punch and a mean forearm. Something held his own standing and striking, but I was delightfully blown away by Alexander’s commitment to laying in his strikes in this match.

He countered Something’s Black Hole Slam attempt by slipping out and then connected with a Tiger Driver for the win. You can put it on the board, another great Josh Alexander match. ****

This was the first successful defense for Deonn Russman & Joeasa of inFAMy.

I haven’t enjoyed inFAMy’s output thus far in AAW, but this was by far their best outing. They ditched the walk-n-brawl for a match built on double teams and constantly having the upperhand. They used the numbers game to eventually roll up Fulton to secure their first defense of the titles. This was serviceable, albeit unspectacular. **3/4

Manders attacked Steele as he was walking up the ramp with inFAMy to kick off this match.

We must talk about Steele doing a standing double stomp onto Manders and putting him through a table that was positioned on the outside of the ring. Seeing Steele leap off of the apron and violently stomp someone through an object like that was an incredible visual. It was a unique spot that woke up the crowd. I loved it.

The finishing stretch of this match with Steele missing a moonsault, then getting smashed by bits of a disintegrated table before being put through a table in the corner with the Hawkeye Stampede was an excellent way to close this match. ***1/4

Earlier in the night, Hakim Zane stated that he was the most under-appreciated wrestler on the planet. Watching him on a monthly basis here in AAW, I certainly think he has at least an argument for that title. Zane constantly pops off the screen, working with an intensity and flare that few on the indie scene seem to bring to the table currently.

Zane dominated Reed early on, fostering control for a long period of the match and cutting Reed off at every possible comeback attempt. When Reed finally did make a comeback that stuck, it was by way of throwing caution to the wind in an attempt to retain his title. Notably, the Flame On Crusher that he connected with, leaping over the top rope and driving Zane off the apron and down to the floor, was absolutely bonkers.

Still, Zane was able to fight back, putting Reed in a crossface that looked hopeless for the champion. Zane pushed off the bottom rope in an attempt to roll over and recenter Reed in the middle of the ring, but Reed used the momentum to his advantage, rolling up Zane and retaining the belt in the process. A great finish that protected Zane while making Reed look wise instead of weasley.

My match of the night through the first seven encounters. These two just click. Zane brings out the best in Reed and vice versa. This is the type of match that would be welcome on any major league television show. Thus, it is worth your time. ****

Kris Statlander falls in her third defense of the title, making Allysin Kay the sixth AAW Women’s Champion ever.

Statlander has surpassed the need to work hard on these shows and who could blame her. This started off a little too goofy for me with Statlander encouraging the crowd to do the wave and whatnot, then it transcended into a pretty pedestrian affair with Kay working over Statlander’s injured knee and eventually submitting her to win the belt. The match made sense. I have enjoyed Kay’s work in AAW and I think her title reign will be a successful one. This just didn’t light my world on fire. ***

The AAW Women’s Championship was on the line at #UnitedWeStand as Allysin Kay knocked Kris Statlander off her throne to become the new queen of the division!

Get the replay on @FiteTV: https://t.co/FZ5IbZReVc

Connor Braxton came out and said he was going to enter himself into the world title match. Russ Jones came out instead and destroyed Braxton, quickly.

This was exhausting, both in an incredibly satisfying way, but also in a frustrating way. On one hand, by the end of this bout, Fred Yehi had exhausted everything in his tank and it was barely enough to defeat the champion. Mance Warner fought valiantly as AAW’s champion for a very long time and his defeat felt monumental. On the other hand, it took a half-hour to get there. Yehi has someone who I always think has worked best in intense, fast-paced settings.

This match dragged on and on and by the end of it, I felt like the uniqueness of this pairing was lost. Yehi wasn’t able to show off his savagery. Warner’s punch-drunk game plan had lost its luster by the half-hour mark.

The effort was there. These guys killed each other. Yehi, who I don’t think ever jumped off the top rope in his EVOLVE stint, was chokeslammed off the top rope onto a stack of tables that did not break. He was then powerbombed through the pair of tables. Nasty. Warner had every part of his body picked apart from his teeth to his feet. He took a beating that only a champion deserves and in the end, his reign ended with a bang. He fought for as long as he could, but he could not survive Yehi’s dreaded submission.

There are people that are going to love this match. These epic brawls with plenty of plunder and setup only do so much for me, though. I will gladly accept being the low-man on this bout because I think there are people that will really love it. ***1/2

After a violent, bloody fight inside of a steel cage and interference from inFAMy, Fred Yehi defeated Mance Warner to become the new AAW Heavyweight Champion.

Get the replay now on @FiteTV: https://t.co/FZ5IbZReVc

There is no better indie than AAW. I think the scene is much healthier than it was at the start of this year, but there is still a gap between what AAW is doing and what the rest of the country’s smaller promotions are putting out. United We Stand is a great look at AAW in a vacuum. This is a show that any new viewer could watch and enjoy. For long time fans, this is the type of payoff they’ve been hoping for. United We Stand was a thoroughly satisfying show from top to bottom. 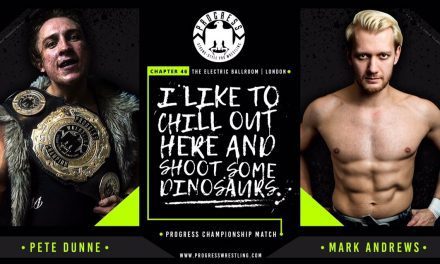 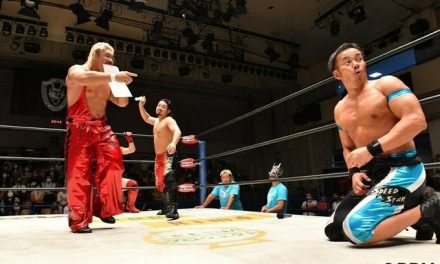 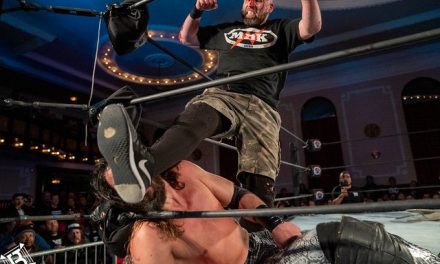