At the beginning of the show, the roster came out to ringside and a ten bell salute was held in honor of the recently deceased Del “The Patriot” Wilkes and Chris Youngblood who were both All Japan regulars in the 1990s.

This was Quiet Storm’s first match in All Japan since 2004, when he worked a one-off six man tag at Korakuen Hall during his Kaientai Dojo days.

The Saito Twins got worked over for a while but finally made a big offensive run with both of them getting in a lot of moves on Honda. Quiet Storm got a hot tag and while Rei managed to survive a bunch of offense, Quiet Storm hit a Lariat for the win. The Saito Twins got in a surprising amount of offense and kicked out of a lot for this being only their fifth match in their career.

This was a passable little match, and the crowd definitely reacted to the Saito Twins’ sumo style offense. While they have a long way to go, they already have managed to garner a small cult following only after a handful of matches as there are always fans of puroresu who dig the sumo turned pro wrestler type. **1/2

Uchida is a stalwart of Dove Pro, while Oosera is a younger Michinoku Pro guy who has also been wrestling a lot in Colega Pro lately. Also, it’s nice to see Andy Wu in All Japan.

Akira and Aoyagi had some really nice sequences early on. Given that they have spent most of their careers in All Japan training together in the dojo, that’s not surprising. Aoyagi then settled into the role of playing the whipping boy for a while. A hot tag was made to Uchida who apart from a Missile Dropkick, didn’t do anything really explosive let alone interesting. Wu hadn’t done much in the first half of the match, but later on he got to hit all of his big spots.

Oosera had the advantage over Akira for a bit but the Jr. champ fought back with a little help from his teammates and then they went into a pretty hot closing stretch with some reversals and flash pins. Akira hit an Enziguri, Meteora and then slapped on the X for the submission win. A fun little match where everyone except Uchida looked good. I would like to see more Oosera in All Japan, and it was nice to have an all-junior multiman tag on the show, especially one that went over ten minutes. That’s something All Japan needs more of. ***1/4

This was just kinda there. Yoshitatsu spent too much time in the ring. Purple Haze could have at least played heels here to give the match some kind of story, but didn’t. Izanagi looked good as usual and his stuff with Omori in the closing stretch was the highlight of the match. Omori pinned Izanagi with the Axe Bomber. This only needed to go eight or nine minutes. **1/2

After losing the PWF Jr. title to Francesco Akira, Iwamoto announced he would be going openweight, and wanted to challenge heavyweights, thus this match.

Iwamoto targeted Zeus’ leg right off the bat. Zeus had enough of that and really started to rough up Iwamoto. The former Jr. ace made several comebacks, but Zeus would cut them off before he gained too much momentum. Zeus hit a Lariat for a near fall then followed up with the Jackhammer for the win. A solid little match but not without its flaws. The leg work was thrown out after the opening minutes instead of being used to tell a story throughout the match. This would’ve allowed Iwamoto to get more offense and near falls, though the match we got wasn’t a squash, it just had Zeus in control for most of it.

Critiques aside, I thought Iwamoto mostly looked good here and did not get swallowed up by Zeus. I’m a little more optimistic of Iwamoto doing the openweight thing now than I was when he announced it. ***1/4

After ditching it for the big Ota Ward Gym show, Lee has brought back his sleazy little goatee. This was SUWAMA’s first match back after having to vacate the Triple Crown due to catching COVID-19.

Lee and SUWAMA started this match which I think was a sign we are going to get a Triple Crown match between them sooner than later. Total Eclipse took control early, heeled it up a bit and worked over Tamura. At one point, Lee tossed around Tamura so hard that his bare butt got exposed briefly leading to chuckles from the crowd. I don’t know if that was intentional or not, but it sure added to the aura that Lee was trying to humiliate his opponents.

Tamura made the hot tag to SUWAMA, and he and Lee really laid into each other. Another highlight was the Ashino versus Omori sequence which led to the end. SUWAMA and Ashino hit stereo German suplexes on Lee and Omori respectively. Ashino then applied the Ankle Lock on Omori while staring directly at Jake Lee for the submission win. That was a cool visual and an overall pretty good match which told the story it wanted to get across well. After the match, Lee and SUWAMA brawled a little bit, then Ashino got on the mic and challenged Lee for the Triple Crown directly because he was originally supposed to face Shuji Ishikawa in a number one contenders match on this show until Ishikawa came down with COVID-19. Lee accepted the challenge and the two will face each other on July 22 in Korakuen Hall. ***1/2

This match was originally scheduled to happen on June 26, at Ota Ward Gym but got moved to this show because of SUWAMA’s COVID-19 diagnosis.

Nextream was in control for most of the first five minutes of the match. KumaDoi eventually made their comeback and worked over Aoyagi for a while. It didn’t take long for the working over of Aoyagi to drag because it was heavy on holds. But things really picked up once Miyahara got a hot tag. In some of these tag title matches, Miyahara has often felt like an afterthought, just doing his usual thing with Aoyagi doing all of the heavy lifting. Now Miyahara just doing his usual thing is very good, but I felt like in this match he tried a lot harder. But while I thought Miyahara’s performance here was great, other things would happen that would hurt the match.

When Aoyagi had Arashi in the End Game at one point, Hokuto Omori and Yusuke Kodama pulled the referee out of the ring. The four members of Total Eclipse then hit a bunch of moves on Aoyagi. The referee then crawled back into the ring, but Aoyagi managed to kick out after being quadruple teamed. Not my favorite thing to do in a pro wrestling match.

There was a crazy spot where Doi hit a Samoan Drop on Aoyagi while up on Arashi’s shoulders. Aoyagi managed to survive that. That was the beginning of the end. Kodama and Omori tried to interfere again, but Atsuki Aoyagi who was seconding the tag champs hit a moonsault off the middle turnbuckle to the outside to stop Kodama, while Miyahara nailed Omori with a high kick to knock him and his chair off the apron. Arashi hit an offensive flurry on Aoyagi but then Aoyagi managed to get a counter to a sit-out Dominator and then transitioned into the End Game for the submission win.

This was Nextream’s V4 defense of the tag titles. This was generally non-stop action apart from some slow stuff near the beginning but I disliked the interference. I also didn’t expect it because Total Eclipse hasn’t been doing it. Also, Aoyagi, as much as I love him, has been in the same situation in these tag title matches where he’s being dominated and very close to losing, but then manages to get a counter or reversal into the End Game to get a submission victory. It’s becoming a trope. So in that regard, while this was pretty good, it let me down in several ways. I really wanted to like this more but just couldn’t. I hope KumaDoi remain as a regular tag team in All Japan though. ***3/4

The show was fine, though obviously the COVID-19 diagnoses of Shuji Ishikawa and Black Menso~re didn’t help. There wasn’t anything absolutely must-see on the show but it was far from a painful watch.

I am concerned that interference from Total Eclipse may become a thing, and that’s the last thing All Japan needs, well perhaps that and bringing back Ryouji Sai. But with the strides All Japan has made in the first half of 2021, they don’t need to overcomplicate things. Total Eclipse should be badass heels who brutalize and humiliate their opponents but don’t use over the top cheating to do it. 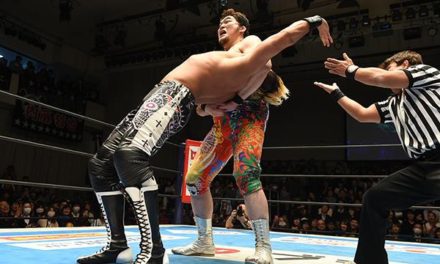 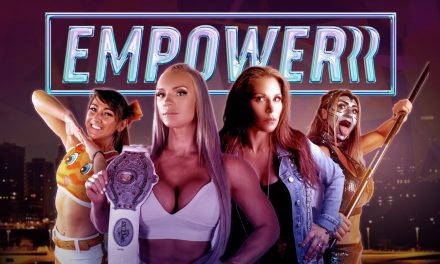