A few months ago with some time of my hands during the pandemic, I found myself flicking through old, dogeared copies of WWF Magazine (as you do). Some of the 1990s editions of Titan Sports’ propaganda publication contained some real gems – such as the strange acknowledgment of the real-life divorce of Randy and Liz Poffo in 1992.

Glancing through the January 1998 issue (with the original D-X on the cover), I was intrigued to read the following line from the profile pages spotlighting the Legion of Doom. In response to the question of “favorite cartoon character,” Mike “Hawk” Hegstrand replied:

“Any member of the Fit Force Five, an animated cartoon that will feature Animal, Hawk, and George Foreman.”

I think I’d remember something like that. Was it possible that work was really done on a 90s kids cartoon featuring the fearsome face-painted duo and the man who opposed Muhammad Ali in the infamous Rumble in the Jungle?

Further investigation was called for.

With a cursory online search bringing up nothing of note, it was time to refer to back issues of 1990s wrestling newsletters. So often such oracles of insight into the inner workings of the industry at any given time, there was no further information circa 1997-98 – but similar snippets from both the Pro Wrestling Torch and Figure Four Weekly ensure the trail does not go cold.

Issue 669 of the Torch, dated September 8 2001, recounts Hegstrand approaching Vince McMahon seeking support for a proposed “drug safety” cartoon in 1997, in the context of a recent radio interview:

“Road Warrior Hawk took shots at Vince McMahon during a radio appearance. Hawk (Mike Hegstrand) appeared on New Jersey’s “The Smack” radio program on Aug. 23 and complained about the “high and intoxicated” character McMahon had him play during his last WWF stint. Hawk said he and Animal (Joe Lauranitis) had approached McMahon with a cartoon concept similar to “Osmosis Jones” that would have preached good physical health, but felt that the character McMahon had him play killed the idea.”

FFW tells a similar tale, albeit via a different New Jersey radio interview:

“Road Warrior Hawk gave a hell of an interview to Phil Varlese of WLFR radio last week. Hawk said he was still mad at Vince for what went down during LOD’s final run with the WWF in 1997. He said he approached Vince with this idea for a cartoon which he said was similar to the new “Osmosis Jones” (whatever the hell that is), the gist of which would be to teach youngsters about the benefits of exercising and taking care of your body. I’m not making this up. Hawk said Vince sabotaged the idea by creating the angle where Hawk was an alcoholic drug addict. He said he was appalled that during their last run with the company, they were used so poorly and forced to put over other teams. Not that this has to do with anything, but I have noticed that some wrestlers do not seem to be cognizant of the passing of time.”

Hegstrand is of course referring to the infamous storyline which began in the summer of 1998 which distastefully played off his own real-life substance abuse issues as LOD interloper Droz tried to usurp him within the team. Osmosis Jones, for the unfamiliar, was a live-action/animation adventure film starring Chris Rock released the month before Hawk’s interview with a plot based around the health and inner workings of the lead character’s body.

The only other evidence forthcoming of the Fit Force Five was a Twitter user enquiring of Antarctic Press a couple of years ago about an advert promoting a comic book spin-off of the group. The indie comics publisher duly replied, pointing the requester to a comics listing site. Whereupon the comic exists – with the adjusted name of Fifth Force. 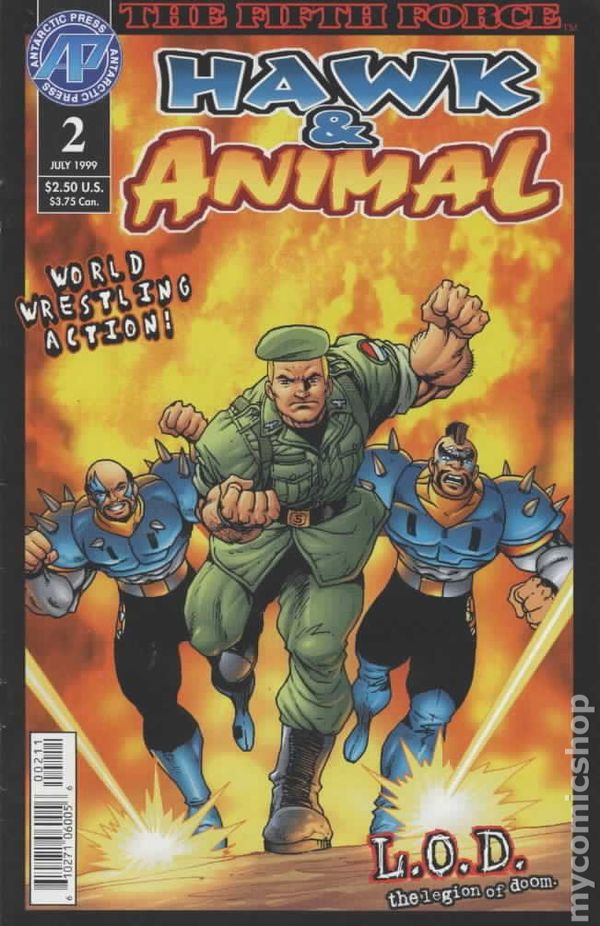 Obviously, I had to purchase both these issues, originally published in 1999. I won’t bore you with the details of the nonsensical plot – I couldn’t even if I wanted to. Needless to say, they may Russo-era WCW look like well-thought-out storytelling.

Reading the comics, I was disappointed not to learn what the other four forces prior to the Fifth Force were – and no sign of George Foreman either. But they do contain some worthwhile information, nonetheless.

A short introduction in one comic is provided by a man called Mark Van Harris. A quick search on his name shows that Texas-based Harris trademarked the phrase “Fit Force Five” back in January 1996 to be used on children’s clothing and footwear. Two years prior, he also trademarked the phrase “Children’s Fitness Network,” a name which is also advertised heavily throughout both issues of the comic.

Elsewhere, Harris thanked the creative duo of Gerald and Frances Baldwin, for the original concepts that Fifth Force was based on. Some background research on Gerald Baldwin told me that he was an artist, animator and director of some renown, his career spanning more than 70 years and including years of work on numerous fan-favorite children’s animated series. He even won two Daytime Emmy awards for his work on The Smurfs.

Sadly, Gerald Baldwin passed away in 2018 at the age of 89, and the trail briefly went cold. An obituary made clear that Frances Novier Baldwin was Gerald’s wife. The couple raised their family in Frances’ native Texas and collaborated on animation projects together throughout the 80s and 90s. I took a chance and contacted Frances.

In her only ever interview about working with Hawk and Animal, Baldwin is finally able to shed some light on what was planned. Finally, we might have an answer to the question which had been bugging me since reading about it in WWF Magazine – who were the fourth and fifth members of the Fit Force Five. She explained:

“Mark Harris, who was behind a company called Children’s Fitness Network that was promoting the show [approached us]. We’ve had no contact with Mark Harris for years. We were very enthusiastic about being involved in a creative endeavor that would entertain and educated children.”

Returning to the health and fitness theme that Hawk mentioned in his 2001 interviews, Baldwin confirms that the series would have been positioned as a vehicle to encourage children to take care of their wellbeing. She added:

“[The concept was] a superhero with the power to shrink to the size of a tiny molecule that would enter someone’s body in order to fight the bad guys (whose goal was to destroy good health).”

Although Baldwin was not able to explain why the animation project did not make it to our screens, she noted that the comic book was originally intended as an accompanying piece to the series, rather than the replacement it turned out to be. Detailing the creative process, she said:

“Our role was to create the bible that would include a clear understanding of the concept of the show, story premises, character development, and some artwork. Character development would include physical description, relationship each character has to another, attitudes, beliefs, manner of speech, motivation, and raison d’être. Following approval of the bible, we would write a 22-minute pilot script. In the event of a TV series, we would continue creative involvement.”

According to Baldwin, Mark Van Harris, responsible for conceiving the project, was to be one of the gang of five if they had made it to the screen. Oh, and that final name? 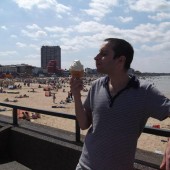