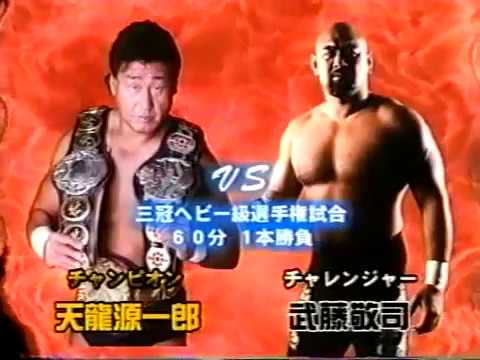 Twenty years ago today, one of the greatest matches in wrestling history took place, and it would not simply be a critical favorite, but would go on to define an era that saw many changes in puroresu that few would have dreamed of a few years before.

In 23:24, Keiji Muto pinned Genichiro Tenryu to win All Japan’s Triple Crown. While major interpromotional matches in puroresu among the top companies had begun the year before, just after the Pro-Wrestling NOAH split from All Japan, to have one of New Japan’s top stars win the title defined by Jumbo Tsuruta, Stan Hansen and Mitsuharu Misawa, was truly a historic moment.

And I would argue the fact that All Japan, after all its ups and downs and subsequent exoduses, still exists and Muto recently had a run with the GHC Heavyweight title, can be traced back to this match.

Just a year before, Muto went to the United States, not just for a run in WCW but for treatment on his knees because he had injured them yet again in early 2000. But Muto also needed a break from New Japan. By kayfabe standards, Muto had a good 1999. He won the IWGP Heavyweight title from Scott Norton on the January 4 Tokyo Dome show and held it for 340 days making five defenses. It was a good but not great reign. The condition of Muto’s knees was evident. And Muto’s bald spot on the top of his head was becoming more pronounced seemingly every tour. Coincidentally, the two best matches of this reign were against Genichiro Tenryu, a successful defense on May 3, 1999, and on December 10, 1999 when he lost the title.

While his 2000 WCW run sucked (both because of his condition and the booking), Muto had time to heal and radically transform his look and in-ring work.

The new Keiji Muto made his debut on the December 31, 2000 Inoki-Bom-Ba-Ye show teaming with Nobuhiko Takada to take on Don Frye and Ken Shamrock. Muto came out to the ring with a hood over his head, and removed it, to huge gasps from the crowd to reveal his bald head and goatee. Then came the debut of the Shining Wizard. Obviously, Muto needed a new finisher because he needed to dial back the use of the Moonsault to preserve (what was left of) his knees. At the time, knees to the head of a fighter on the ground was legal in PRIDE, and that became a major part of many fights. While the fusion of MMA and pro-wrestling in Japan in the early 2000s rightfully has many detractors, the Shining Wizard was the coolest thing to come out of it.

Muto had returned to a radically changed landscape in puroresu in 2001.

Pro-Wrestling NOAH had formed, and now All Japan and New Japan were working together. Muto embraced the new interpromotional atmosphere by competing on All Japan’s Stan Hansen retirement show on January 28, 2001. Soon after that, he would form the interpromotional stable Bad Ass Translate Trading (BATT) with MMA fighter Don Frye, All Japan’s Hiroshi Hase and Taiyo Kea, Michinoku Pro’s Jinsei Shinzaki, and briefly Shinjiro Otani before he left for ZERO-ONE in March. On April 14, 2001 Muto defeated Toshiaki Kawada at an All Japan Budokan show with the Shining Wizard which would set up the Triple Crown match with Tenryu (and pissed off a lot of hardcore fans in both Japan and the West who thought Kawada was being sacrificed for the sake of the All Japan-New Japan relationship).

“Mr. Pro Wrestling” himself, Tenryu was in the middle of a late-career renaissance. The mid-to-late 1990s saw Tenryu take a step out of the main events as he competed more often in New Japan in tag matches and WAR started to run fewer shows. Tenryu roared back into main events in 1999 against Muto and faced Kensuke Sasaki for the IWGP Heavyweight title on January 4, 2000. He shocked just about everyone, when in July 2000, Motoko Baba announced he had signed a contract with All Japan in the wake of the NOAH exodus. Giant Baba had vowed that he would never let Tenryu return, but Baba was gone and the company was in its darkest hour.

Tenryu won the Triple Crown on October 28, 2000 defeating Kawada in the finals of a tournament for the vacant championship.

Prior to the match against Muto, he only defended once, on March 3, 2001 against Taiyo Kea. Having already faced Kawada for the Triple Crown, the company was short on credible challengers making it all the more important and inevitable that Muto came into All Japan.

Now to the match.

The crowd was buzzing as both men entered. It was one of those matches where you could feel it was a big deal just based on the entrances.

Instead of simply locking up to start, Muto immediately hit a dropkick to the knee, and another one. Muto went for a Dragon Screw but Tenryu blocked it with chops. Tenryu then went for a Dragon Screw of his own, but Muto got out of it with a Shining Wizard, then hit a Backbreaker and then went up for the Moonsault, but Tenryu rolled out of the way. This is quite possibly my all-time favorite opening moments of a match. It immediately drew the crowd in and made them even louder and basically said that this 51-year-old man and this man with basically no knees were going to go balls to the wall in this match, so don’t look away.

Given the age/physical condition of the participants in this, there were some sloppy-looking moments, but they ended up adding to the match. Tenryu raised his leg to block a handspring elbow into the corner and smashed his foot right into the back of Muto’s head, and it looked painful. And when Muto hit a pescado to the outside, he ended up landing knees-first into Tenryu’s head, which would play into the story of Muto trying to wear down Tenryu.

Tenryu wanted to show he could hang with Muto. We got a Tope Suicida, dropkicks to the knee and a top-rope hurricanrana from the Triple Crown Champion, demonstrating that despite being over 50, he still had plenty of gas in the tank.

In the middle portion of the match, both men went after each others’ knees with dropkicks, Dragon Screws and submissions. These spots got lots of heat from the crowd, but you could argue given that none of the work on the knees was sold in the closing stretch of the match that it was the biggest flaw in this.

However, that closing stretch was glorious. Tenryu had the advantage, though Muto managed some hope spots like a Frankensteiner. We got the aforementioned top-rope Hurricanrana from Tenryu for a 2.9 count. Tenryu then hit some closed fist punches and went for a Northern Lights Bomb, but Muto, as he was being lifted up, drove his knees into Tenryu’s head. Tenryu sold the knees like he had been hit in the head with a lead pipe. Tenryu still managed to get up and land a couple more punches but Muto retaliated with a Bicycle Kick and two Shining Wizard for two 2.9 counts. Then Muto hit his backbreaker and Moonsault combo for the win and the Triple Crown.

There was no wasted motion in this match. Every move meant something and the crowd bit on everything. As Muto got older and more broken down into the 2000s, there was the complaint that he was spamming the Shining Wizard all the time. While that is true, it’s not the whole story. Muto was prone to spamming the Shining Wizard almost immediately after he introduced it (see Muto vs. Kawada Arpil 14, 2001 as an example). But here it was used more judiciously, and as a result, each one meant a lot more.

After the match, Muto would continue to have an incredible 2001. He made it to the finals of the G1 Climax against Yuji Nagata, and that October in the span of six, he and Taiyo Kea would win the All Japan World Tag Team titles and then the IWGP Heavyweight Tag Team titles. Muto and Kea would also win All Japan’s Real World Tag League in December. With these accomplishments it is no surprise that he won 2001 Wrestler of the Year in Tokyo Sports and the Wrestling Observer. And Muto vs. Tenryu would win the Observer’s match of the year.

Muto had proven that he could be a draw and generate attention outside of New Japan. And with the growing power of Inokiism, Muto, Satoshi Kojima and Kendo Kashin would jump to All Japan in January 2002. This jump saved the company. It was likely that Motoko Baba would have wound up All Japan after the 30th anniversary. Muto ended up gathering investors to buy it from her after the 30th anniversary was celebrated in October 2002.

The persona that Muto pioneered in 2001, the bald head, the goatee, the Shining Wizard and the Pro-Wrestling Love branding has stayed relatively unchanged all the way up to the present day. Muto completely reinventing his persona and wrestling style would keep him at or near the top of the card in All Japan (and even at times again in New Japan) for the next decade or so. And without that career resurrection, it seems incredibly unlikely that Muto would have been chosen to have his nostalgia run in NOAH today.

I had always liked Muto, but I didn’t always think he was one of my all-time favorites. I am too young to remember his run as The Great Muta in 1989 NWA, when many North American fans fell in love with him. But after watching his 2001 run in as close as you could have in real-time back then, he forever solidified his status as one of my top ten greatest wrestlers ever. And while I was not particularly enthusiastic about his latest run at the top of NOAH, it will take a lot more than that to get me to drop him from my all-time list.

So take some time out of your day to watch this legendary match that was part of a legendary run. It will take you less than 25 minutes to do it, and by the end of it, it won’t even feel like this match against two of the greatest wrestlers of all time went over 20 minutes. 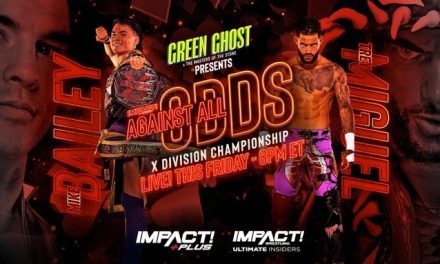