Why AEW’s Blood and Guts Match Needs to Deliver 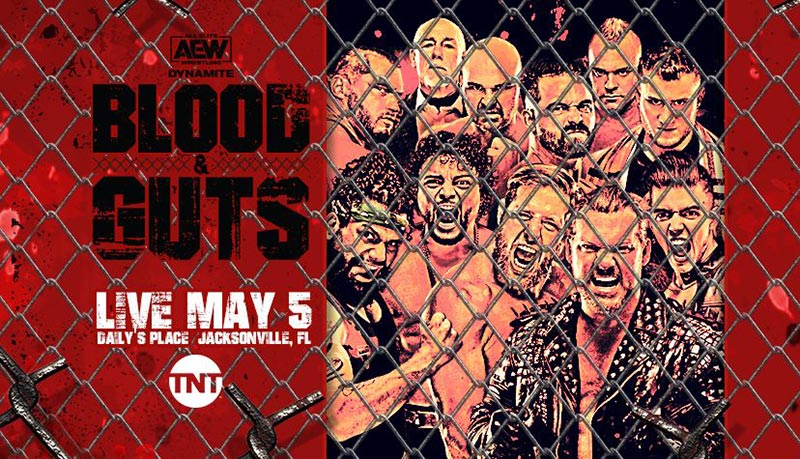 Wednesday’s AEW Blood and Guts TV special will be taking place from the all-too-familiar Daily’s Place—a pandemic-necessary venue that will have 50% capacity, the largest AEW crowd since the COVID-19 pandemic started.

More than the crowd in the stands, AEW Blood and Guts has the opportunity to be a transformative and important moment, event and match for the company.

While the company has hosted numerous PPVs, Blood and Guts offers a chance for the company to create a company-defining gimmick match.

Originally slated for the March 25, 2020 episode of AEW Dynamite, the Blood and Guts concept officially dates back to November 2019 when AEW filed a trademark for “Blood and Guts.”

The term itself is an homage/play to WWE CEO Vince McMahon who uttered the phrase during a July 2019 WWE investors call:

AEW smartly decided to use that phrase as a rallying cry, registering the trademark and then at AEW Revolution, officially announced the first-ever Blood and Guts match, their take on WarGames.

Of course, this little COVID-19 pandemic happened, crowds went away and AEW very keenly decided to shelf the concept until the time was right again.

That time has come with May 5’s episode of AEW Dynamite. And again, this match will be one of the most important in AEW’s history.

AEW has rolled out several gimmick matches over their two years of inception to varying degrees of success. Some have been successfully translated into great matches with rewarding finishes—Casino Battle Royal & Casino Ladder Match—and others are better left forgotten—Tooth and Nail & Mimosa Mayhem.

In Blood and Guts, AEW has the chance to stake its claim to a gimmick match that can come to be the defining gimmick match for the company and its biggest feuds. Blood and Guts isn’t a wholly original gimmick as it’s an obvious nod to the WarGames-style matches created by Cody Rhodes’ father (Dusty Rhodes) in Jim Crockett Promotions.

The WarGames-style match is remembered fondly but has a complicated history.

On one hand, the WarGames match was undoubtedly most important gimmick match in Jim Crockett Promotions and World Championship Wrestling. Designed specifically as a way to defeat The Four Horsemen, early WarGames matches were brutal and bloody affairs that saw babyface team after babyface team defeat the hated Horsemen all across the country.

The basic format of WarGames is a match containing two teams and five competitors entering the ring in a staggered entry format. WarGames features two rings surrounded by a cage. One wrestler from each team begins the match. After five minutes, a member from one of the teams enters the ring. The order determined by a coin toss. The typical structure is the heel team winning the coin toss giving them a man advantage throughout the match.

New entrants join every two minutes until “THE MATCH BEYOND” begins. At this point, the one way for a team to win the match is to make one of their opponents submit or surrender. No pinfalls, no count-outs, no DQs.

By 1988, the company upped the ante with 11 WarGames matches throughout the summer with stops in Chicago, Orlando, Charlotte, Chattanooga, Greensboro, Cincinnati, Daytona Beach and more.

At The Great American Bash 1989, WarGames made its PPV debut when The Road Warriors teamed with the Midnight Express and “Dr. Death” Steve Williams to take on The Fabulous Freebirds and The Samoan Swat Team.

The WarGames match would return a few years later at WrestleWar 1991 with The Four Horsemen getting their first-ever WarGames win over the team of Sting, Brian Pillman and The Steiner Brothers.

Unfortunately, this is where the match began to lose some steam. Boring brawls with no blood or logic, the insane three-team everyone-for-themselves 1998 match and thrown-together last-minute booking spelled doom for the match. If you’re interested in reviews of these 90s WCW WarGames matches, I suggest listening to the Fall Brawl Recall series on the VOW Flagship Patreon!

By the time WCW hosted their final WarGames match on an episode of WCW Monday Night in September 2000, the match had lost all steam and was no longer special, important or memorable.

WarGames, as a concept, was a great house show draw and, when handled properly, a tremendous feud-ended, beginner or heater.

Still it’s undeniable, there are more bad WarGames matches than good ones.

In NXT, WarGames’ complicated history became even more convoluted as NXT removed the roof to allow more high-flying moves and also added the ability for pinfalls to end the match. An admirable effort that resulted in fun matches and moments but really, NXT’s WarGames matches were WarGames in name alone.

Few if any WarGames matches have lived up to the lofty expectations fans put on them. Like ladder matches, Hell in a Cell and countless other wrestling gimmick matches, early standouts help fuel a rep that is oftentimes undeserved.

This leads us back to AEW’s Blood and Guts and Wednesday’s show which has an opportunity to bring the WarGames concept back to its roots while at the same time learning from the mistakes of missteps of the past.

AEW has stated that Blood and Guts will be a throwback to the classic Jim Crockett Promotions/Dusty Rhodes idea of WarGames with an enclosed cage, no pinfalls (only submission or surrender) and if the preview video is to be believed: A LOT OF BLOOD!

The WarGames concept can work, we have examples of that, but we also have more examples of the gimmick falling flat, feeling like a waste, or just straight-up not making any sense.
What AEW does with their very first Blood and Guts could have ramifications years down the line.

If they knock it out of the park on Wednesday, they’ve just created their company’s pinnacle gimmick match that can be utilized for PPVs, TV specials and feud blowoffs down the line.

If they swing and miss, Blood and Guts will be yet another gimmick match misstep from AEW and join the pantheon of disappointing WarGames matches. 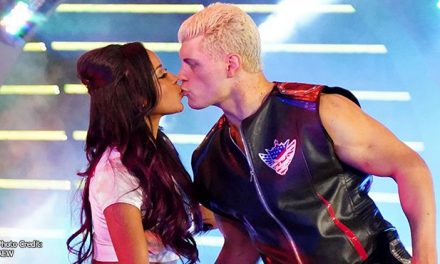 Make No Mistake, Both Cody and Brandi Rhodes Are Huge Loss for AEW