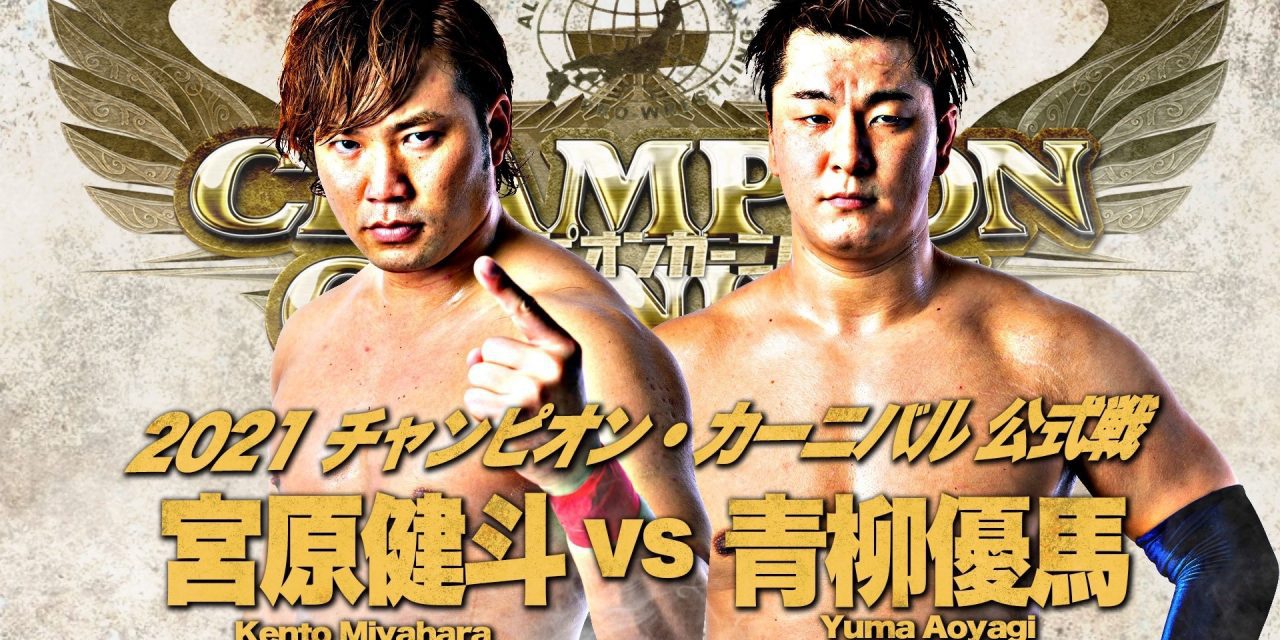 This was two beefy dudes chopping each other a lot. That’s good enough for me. This definitely had dumb jock wrestler energy. These guys unloaded most of their offensive moves in the eleven minutes this went. They spilled out onto the floor and did a tremendous sequence where they kept doing running lariats into each other at the same time, then both men tried to pull the other from getting into the ring leading to a double count out. Now as far as double count outs go, I thought the end of the match was pretty good all things considered. The double count out here was probably a result of Otani’s injury as he was to have faced Zeus on the final night. This was my favorite match of Doi’s in the tournament so far. ***1/2

This was quite the sprint. In the first few seconds, Ashino hit a dropkick and then a missile dropkick. Ashino was wrestling like a man who had to win this match if he wanted even a faint hope of having a chance to stay alive in this tournament. Ashino did some leg and ankle work on Suwama. The Triple Crown Champion eventually took control with some chops and suplexes, but it didn’t last long as Ashino fought back and got an Ankle Lock that Suwama eventually reversed. Then Suwama hit several backdrops for some near falls, then followed it up with a big lariat and a Backdrop Hold for the win. After the match, Ashino and Suwama shook hands. This was a ton of fun, though the result and Ashino’s match on the previous show made him look like a huge geek; at least Ashino managed to survive a lot of big moves. After the show, it was revealed that Ashino and Suwama are forming a tag team which is a cool development and should lead to some great matches. ***3/4

As I said in the review of the last show, Lee’s character work is really improving, and this match was no exception. Ishikawa had the advantage out of the gate, but Lee soon fought back to gain control and acted like a complete dick while doing it.

The match itself was good, but not great. It was a little unfocused at times, but there were still some good sequences. Lee looked to have the match won after the running knee to the back of the neck, but Ishikawa countered the D4C with a small package for a nearfall and then soon after that caught Lee with the Dojime Press (a.k.a. the Thesz Press) for the three count. I liked the ending, and it continued the trend of matches in the tournament ending out of nowhere. ***1/2

The early portion of the match was formulaic Miyahara stuff. Some grappling and breaks to start off then some brawling on the outside. The pace was also that of a big Miyahara match with a slow and steady build into a hot closing stretch. Given Aoyagi’s recent push, I was surprised Miyahara controlled as much as the match that he did, though that is not something that took away from it.

These two keep having just better and better matches every time they meet in singles matches. They had one of the few good matches in last year’s Champion Carnival, and Aoyagi has come a long way since he first challenged Miyahara for the Triple Crown. Miyahara also really helped to make Aoyagi look like a credible threat here with some great selling, especially after Aoyagi pummeled him on the ground with forearms at one point. There was also a real cool spot where after a knockout was being teased, Miyahara lifted Aoyagi directly off the ground to set up the Shutdown German Suplex, but Aoyagi countered that into the End Game. That was a nice creative spot given just how predictable spots around the Shutdown German Suplex have become. Aoyagi also got several near falls that I bit on because of how finishes in the tournament have been booked. Miyahara got the win with his third attempt at the Shutdown German Suplex. This is my new match of the tournament and it felt like a real war. What’s great is that I think these two have an even better match in them down the road. ****1/4

After a lackluster previous show, the Champion Carnival roared back to life with one of the best shows of the tournament.

Going into the final night, there are four wrestlers with ten points: Lee, Miyahara, Sato and Suwama. Aoyagi, Ishikawa and Zeus have eight points and are not technically eliminated, but for them to remain alive on the final night, Ishikawa would have to beat Suwama, Aoyagi would have to beat Sato, and Lee versus Miyahara would have to end in a double count out or double DQ. Zeus automatically gets to ten points because he was supposed to face Otani on the final night. This scenario is completely unlikely. While it is possible that a playoff final could be forced featuring Suwama or Sato, the most likely situation is that Lee versus Miyahara becomes the de facto final as I have predicted all along.