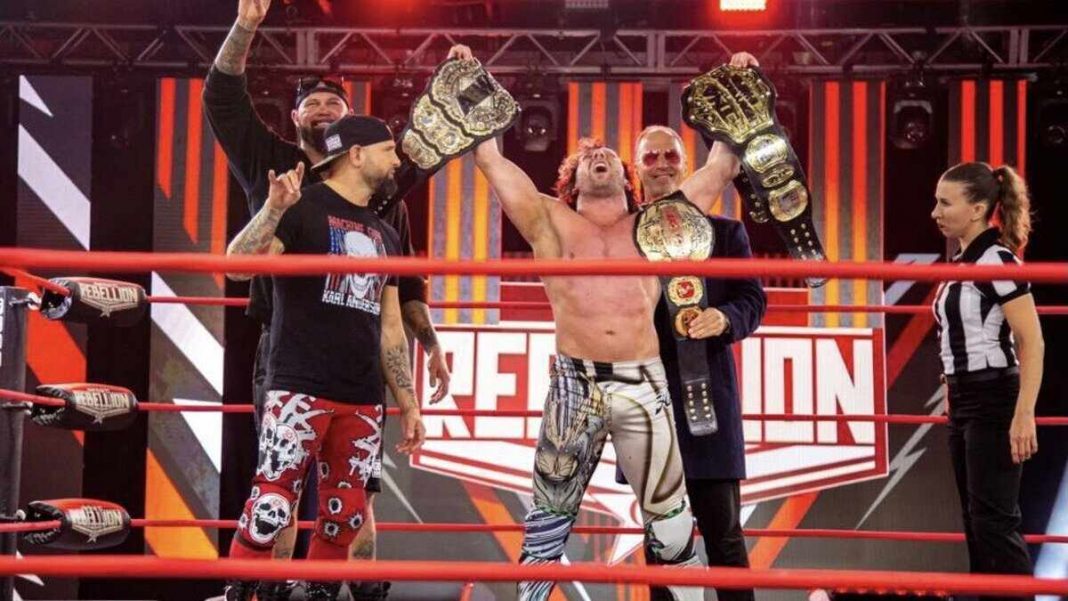 Impact Wrestling returned to PPV this past Sunday, April 25th, with Rebellion, headlined by a winner-takes-all match between Kenny Omega and Rich Swann for the AEW and Impact World Championships.

Although I remain of the opinion that any singles combination of these three guys would have been preferable to a three-way, this was a really good match and a great way to open the show.

They worked some nice three-way offence without delving into too many tropes and, probably because this only went around 11 minutes, it was tightly paced throughout. It falls slightly short of the **** mark for me because Ace Austin had a couple of rough moments on cartwheel hurricanrana attempts, and TJP’s bootwash continues to a very poor imitation of Samoa Joe’s, but overall the work was really good and maintained the trend of the X-Division being Impact’s workrate division in 2021. Alexander has been one of, if not the, best bell-to-bell workers in the promotion this year, so belting him up is a good call. ***3/4

Eric Young’s ACL injury ruled him out of this match and his replacement ended up being the man formerly known as Big Cass, now billed as W. Morrissey (the name needs work). I know that he turned to DDP Yoga after struggling with depression and substance abuse after his WWE release, but man, he looked physically fantastic here (even if I now can’t shake Garrett Kidney’s comment that he’s just a big version of Edge).

In terms of his work in the ring, he looked very solid and they did a strong job of presenting him as a dominant new arrival. The match was pretty chaotic but definitely in a good way, with a series of big spots and moves, many of them on the outside, tying it together quite nicely. Morrissey and Mack were the last men standing after a big ‘superplex onto the bodies’ spot on the outside, with Morrissey blocking the stunner attempt and putting him down with the East River Crossing.

The finish was a bit wonky as Morrissey went into the follow-up punches a bit too quickly, such that it looked sort of like he’d pulled Mack’s shoulder up to continue the match, but overall it was solid. Gentleman’s three for me, with the new arrival and Rhino finally brand matching the rest of Violent By Design giving the in-ring work a bump. ***

I chuckled far more at Matt Striker calling Myers ‘Hawkins’ and no selling it than I should have done. It wasn’t even funny. Maybe I’d had a long day, what can I say?

I’m probably slightly higher on this than most, but I quite enjoyed it. While I’d normally roll my eyes at too much walk-and-brawl on a PPV, it worked here because a traditional hold for hold wrestling match wouldn’t have sat right with the billing they were giving this rivalry. The Rough Ryder on the ramp was a great spot, as was the finish in my view. They did the whole ‘one wrestler has an injury, can’t continue, heel teases helping before delivering the killshot’ angle, but Cardona did genuinely go down awkwardly and the injury could have been legit. That added a lot to what they were trying to do, as did Myers’ very aggressive lariats.

I feel there is definitely more meat on the bone here, so expect a proper blow-off on one of Impact’s forthcoming monthly specials. ***

I know it was because of the Ellering in-ring debut and the return of Jazz as the challengers’ manager, and that it’s less essential in wrestling than in boxing or MMA, but champions coming out first always jars with me. Even if they’re losing, champions, and the belts they represent, should mean something and bringing them out first is like jobbing them out in my view.

The match was fine but the weakest of the night. Everything on the card outside of the main event and the Last Man Standing match got between 9 and 12 minutes, and this was the only one that felt long for the time given. The work was fine, don’t get me wrong, it just felt rather formulaic and didn’t have much bite or excitement to it. Ellering got the pin on debut and I’ll be interested to see where they go next. **1/2

I Quit and Last Man Standing matches have the same problem for me – the stipulation necessitates so much dead time involving the referee that it’s impossible to get a flow going. It’s that key failing that makes them so difficult to rate. A lot of the work here was good, and there were some nice spots dotted throughout, such as Trey’s Sliced Bread #2 off the ringpost and the finish, which saw Sami attempt to trap Trey under the steps for the count, only for Trey to slip out and land a running cutter off the steps, through a table. They also told a good story centered on Trey’s passion coming through but I couldn’t help feel that they could have done all that, and more besides, with a different stipulation. ***

There’s been nothing spectacular about either of them but the two matches that these teams have had in Impact have been really solid. Certainly in the case of The Good Brothers, it’s brought the best out of them or put them in a position where they can do some really good work.

As should always be the case with second matches in rivalries, there were some good callbacks to the match in which FinJuice won the titles, Gallows this time cutting off the Doomsday Device attempt. However, for all the improvements to mindset and planning that they showed The Good Brothers to have implemented, the finish furthered the story that FinJuice simply have the number of their former mentors, with David Finlay capitalising on a slow setup for the Magic Killer to take Karl Anderson out, allowing Juice to pin Gallows with a Small Package. ***1/4

I got five of my predictions wrong on this card and that disheartens me but I was very glad to be wrong in my preview about this match. Not only was the match itself far better than I’d expected, but the face turn for Deonna was staved off as she once again had Kimber and Susan in her corner.

Indeed, Deonna doubling down as a heel meant that Tenille became the default face, ensuring that she was no longer interrupting her matches to take pictures with Kaleb but instead just working. That allowed her to deliver probably the best showing of her Impact tenure yet. While she may have been overtaken by some of her contemporaries, Tenille is still a very competent worker and she looked really good here.

The Spotlight Kick appeared to have sealed the deal for her but Kimber and Susan ran the distraction, allowing Deonna to hit the Queen’s Gambit Gotch-style piledriver for the win. The repeated interference from Kimber and Susan does drag it down for me a bit but again style points were at play here – I’m half-Scottish, so I couldn’t help but admire the faux tartan gear modeled by Tenille and Kaleb. ***

Post-match, Deonna, Kimber and Susan started to attack Tenille, only to be run off by the returning Taylor Wilde. She was in the ring all of a few seconds, and I don’t want to jinx anything, but she looked good in there.

A backstage segment earlier in the show involving Tony Khan and Scott D’Amore, which led to there being two refs for the main event, really increased my fears of chicanery and nonsense in this match, the most significant Impact main event in a very long time. We did get one ref bump (something I’ll always be annoyed by, irrespective of the circumstance), but it was thankfully kept to a minimum as these two delivered a very good main event that easily befitted the occasion.

From the seconds in both corners to the addition of Mauro Ranallo to the commentary booth, they successfully managed to nail the ‘big fight feel’ right from the off. Don Callis’ remarkable introduction for Kenny Omega was fantastic, as were the occasional glimpses at a very pensive D’Amore near the ramp.

Ranallo really does make a difference, especially in these one-off spots, and the ‘keys to victory’ that he’d narrated in advance helped form a large basis of this match. Swann had a fast start, proving tricky and evasive, before Omega reversed a handspring attempt on the outside and wore down Swann’s neck and back with strikes and holds.

They told the story of the One-Winged Angel being the ultimate killshot and Swann doing everything in his power to avoid it. They showed that Swann could hit the Phoenix Splash from anywhere and that his strikes, too, were potent. They also sold the effectiveness of the V-Trigger, even if the move is one of my biggest bugbears with big Omega matches. While I understand that we’re asked to suspend a lot of disbelief when watching anything wrestling promotions do, unprotected, running knee strikes to the head should be treated far more effectively than they currently are. I’m not saying it needs to be like the One-Winged Angel, but Omega landing seven or eight and Swann carrying on doesn’t sit 100% right with me.

The one ref bump saw Omega block the handspring cutter by shoving Brian Hebner in the firing line, with Aubrey Edwards then taking over. She blocked Omega’s attempted use of the chair, allowing Swann to come close with a Magistral cradle. That wasn’t enough and after he whiffed on a Phoenix Splash attempt, one more V-Trigger left Swann there for the taking. One One-Winged Angel and three seconds later and Omega had won.

I had some concerns about how this match would pan out and how close it’d appear. In the end I felt they did a good job of showing Swann’s fighting spirit and gave him enough to make the match competitive. Ultimately, my rating is brought down by a couple of awkward moments they had when attempting some high spots on the ropes and the fact the outcome of the match was never in doubt. More drama on that score and you’d have been looking at something higher, but this was still a home run effort. ****1/4

They billed him as the Belt Collector. On this night, Kenny Omega came, saw and conquered. Impact Wrestling no longer controls their own world title. Now the fun really begins.

Impact Wrestling Rebellion was a very solid show, headlined by the best match to take place in the promotion this year. Everything on the show was solid, there was a fun debut and a well-booked return. There was the initial tease of what’s to come at Slammiversary (I’m crossing everything for Samoa Joe’s safe return) and two matches, the X-Division opener and obviously the main event, well worth your time. A firm thumbs up from me. 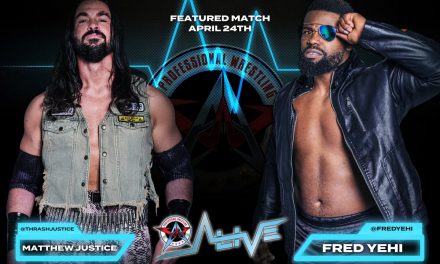