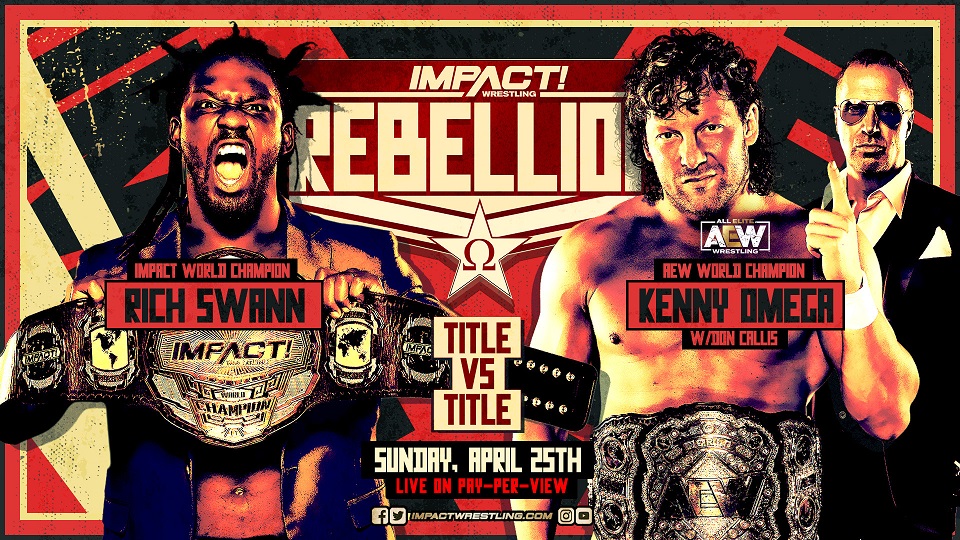 This is probably the best collection of midcard babyfaces that Impact could put together to face their only notable faction and the thing about the match that interests me most is how Eric Young continues to work with a blown ACL.

That’s a little harsh. Actually quite a bit harsh. The setup for this match has been good and the closing angle on the go-home show was real fun. I like all the guys in this match and I know I’ll enjoy the match, and that it’ll probably be quite good. My main issue is that I don’t know what Impact do next with Violent By Design, I don’t know where they go. With Omega set to win the World title and heels feasibly holding all the other belts come the end of Rebellion, there’s no obvious next programme.

I had hoped that the mystery assailant of Tommy Dreamer would be revealed as Willie Mack or the returning Heath, mostly to add a wrinkle of intrigue and character development, but I was thwarted when they put the deed at Sami Callihan’s door.

The whole dynamic of this match makes me think it’s ripe for the show opening spot. In terms of a winner, this doesn’t feel like the big blowoff to something, so Violent By Design could well win. That said, they got the win at Hardcore Justice, and Young got the win on the go-home show, so the babyface alliance coming out on top here makes the most sense. Prediction: Storm, Sabin, Edwards and Mack

When Cardona joined in January, shortly after Myers signed a permanent deal with Impact, this was always going to be his first proper feud. To be truthful, the build has been quite good.

It’s not been presented as a blood feud and that’s 100% the right call. Almost everyone watching Impact will know they’re buddies and Matt Striker’s out there shilling their podcast – turning them against each other too hard just wouldn’t make sense. Cardona called for the match but Myers wasn’t interested. That was until he attacked Jake Something (who has sadly been used as little more than a pawn in this story) and accepted, bringing us here.

I honestly don’t know what sort of deal Cardona is on with Impact and that does make picking a winner more difficult. He’s the sort of guy who’d be perfect in a losing effort against Kenny Omega in an Impact TV main event, and a win here would get him there. Myers is the permanent guy though, and does need a win in this spot to give him some credibility. Still, Cardona has invariably had the lesser hand on TV, so him winning feels right. Prediction: Matt Cardona

This is, without a shadow of doubt, one of the best built matches on the entire card.

Callihan’s better feuds have normally come when there’s a shred of truth to his promos and that’s been the case here. When Trey, somewhat surprisingly to this writer at least, returned to Impact earlier this year, Callihan immediately called him out. He said that Trey ran away every time things got difficult and that he’d never won anything in Impact because he was a choker, someone who always fought well to get to the big spot but would never step up when that big spot actually came round.

I could have done without the tropey strange bedfellows tangent we went on but all in all it’s been good. Portraying Callihan as Tommy Dreamer’s mystery assailant, ostensibly done to give Miguel a chance in the main event (which he ended up losing), was a great kink to set this match up. The Last Man Standing stipulation feels a little odd, but it’s the type of environment where Callihan is most comfortable, so this could be quite good.

Whether it’s Trey’s remains to be seen, and I feel there is some expectation, on my part at least, for him to have a good showing. Impact management always positioned Trey as the singles guy in The Rascalz and I feel he’s primed to beat Ace Austin for the X-Division title later in the year. Given that this feels like the blowoff to the Callihan feud, Trey is likely walking out the winner. Prediction: Sami Callihan

Going into the go-home show, I was convinced that Grace’s partner would either be Rachael Ellering, Taylor Wilde or a complete surprise on the night. In the end it was the former, Ellering hitting the ring to save Grace from a 2-on-1 beatdown and clearing house.

Ultimately, I’m not invested in this match for two reasons. Jazz’s retirement was well executed – she got a good little run with Impact and went out in the right way at Hardcore Justice. Her retirement speech on Impact TV was great. Giving her a win over the tag champs five nights after she’d retired, however, was not the one. Having Grace in this match makes sense and they could have done it in a variety of others ways, all of which would have utilised Jazz’s retirement in a better way.

The other problem is that my worst fears about the tag division have been realised – there isn’t a division. They split up the only other recognised team, Havok and Nevaeh, with the latter leaving the company. There is literally no one else, at the moment, to challenge Hogan and Steelz, so a Grace and Ellering win is the only realistic direction they can go in.  I’m not sure it’s the right one, especially with a Grace heel turn feeling like an inevitability of late, but I fear it’s their only option. Prediction: Jordynne Grace & Rachael Ellering

Chris Bey’s recent injury has been a real shame, as I figured that he would have been involved here, either against Austin in a singles match or as part of a four-way. Still, this match has been well built, even if I’d always prefer some combination of these guys in a singles match over a three-way dance, but hey-ho.

On paper, this figures to be the best, or second best, match of the night. The X-Division has once again been anointed the work rate division of Impact Wrestling and I’m so here for it. TJP has been thriving. Ace Austin has been shining. Josh Alexander might well have cemented himself as the best singles wrestler in the entire promotion.

They’ve all been given wins over each other in entertaining TV matches, giving a nice little story that they’ve each got one other person’s number. As far as I see it, TJP is definitely eating the fall. While I’d personally love Alexander to win, Austin stealing the pin and keeping his beef with Alexander going seems the most likely outcome. Prediction: Ace Austin

You probably can’t blame this on the Kylie Rae situation six months ago, but I will. The Knockouts Title picture, although you could read that as the entire division, is so flat.

Tenille Dashwood’s gimmick feels ice cold, to me at least, and on the other side, within a year of joining the promotion as this fantastically arrogant, brash heel, Deonna Purrazzo has naturally migrated to being a babyface. I’ll admit to not liking the corny, cowardly, hiding-behind-RD Evans Deonna, but this just doesn’t feel like the best use of her. It is indicative, however, of Impact running out of ideas.

As much as I don’t think it’s a great move, Tenille sneaking her way to the title would be the logical payoff to her story and would hopefully add some spark to the division moving forward. Her promo work on the go-home show, talking about being the one who heralded in the progression of women’s wrestling in North America, was very good and sets a title win up perfectly. In-ring, this figures to be the weakest match of the night. Prediction: Tenille Dashwood

I’ve definitely deliberated more over this match than any other on the show. I honestly just don’t know about this feud or where they go from here.

The segments involving these guys, in the ring at least, have done good numbers, so it’d make sense for the company to keep it going. However, there has been no story since FinJuice won the titles at Sacrifice. Or there wasn’t until the go-home show.

It had seemed as simple as the former champions getting their contractually obligated rematch, especially with FinJuice not even there for the recent TV to give this a real push. It had felt quite flat but The Good Brothers knocked it out of the park with their go-home promo, wrapping up an easy win over Decay before explaining that they had been distracted before and had rested on their laurels but FinJuice defeating them had snapped them out of it. Losing the belts had lit a fire under them and meant the only thing they cared about were those belts.

That’s enough to get me back in the game and given how decent their first match was, I have reasonably high expectations for this one.  Although their time without the belts will have been brief, I’ve got a strong feeling about The Good Brothers winning the belts back and ending the show by standing in the ring with Don Callis and Kenny Omega, holding all the gold. Prediction: The Good Brothers (Karl Anderson & Doc Gallows)

There’s an awful lot to unpack here. I’ll begin with the good stuff.

This is a hugely significant main event for Impact and the obvious direction this link-up with AEW was always going to go in. It gives Kenny the opportunity to walk around as the king of all he surveys, and it gives Impact a real PPV rub. I don’t know of many other matches like this at all, certainly not between two American promotions, so it’s historically significant too. It is a big time match, it should be excellent bell-to-bell and it’ll hopefully help Impact do a good buy rate.

Likewise, the addition of Mauro Ranallo to the commentary booth is a great call. Yes, he was more than a little overbearing when on your TV every week while under the WWE banner. However, he’s good at the Boxing and MMA announcing that he does and they’ve rightly tried to build this match as a fight, a true sporting contest between the best of the best. He’ll help sell that to the viewers. To see what I mean, look no further than the keys to victory pieces, narrated by Mauro, that Impact put out. They’re exactly the sort of thing they should do more of.

However, there is the elephant in the room – AEW’s utter lack of promotion for this match. OK, they ran an advert on this week’s episode of Dynamite. But that’s been the only mention of this match since it was announced well over a month ago. Surely, if in the near future Omega will be walking around with both belts on AEW television, you’d advertise what he was doing. Even if that was only in passing through the commentary team or the odd vignette.

AEW’s decision not to can’t be because they fear Impact. They’re not in the same league, not remotely. I don’t see what harm they’re doing to their viewership or fanbase by giving Rebellion the odd mention. Whatever it is, it seems incredibly remiss and the most frustrating element of what has been a decent build (Don Callis’ setup promo was exceptional) for what should be an excellent, historic match.

My only concern around the match is how much the outcome not being in question drags it down. That said, they’ve done a good job of building around the One-Winged Angel, and Rich finding a counter for it, that it should still be great. Kenny’s still winning, though. There’s no doubt about that.  Prediction: Kenny Omega 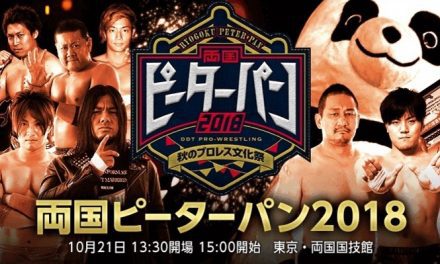 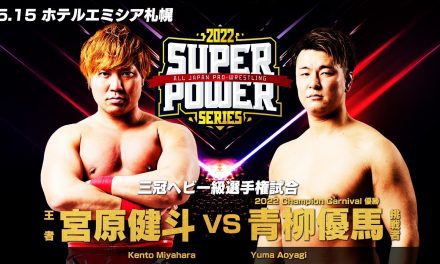