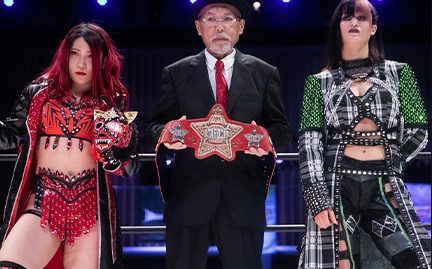 Stardom returns to the Yokohama Budokan for just the second time since the venue opened as they look to follow up on the success of All Star Dream Cinderella at the Nippon Budokan.  With titles on the line and an all-out war between two factions on the card, this should be an eventful show.

This was a good opener with Hina getting the very surprising win.  Hina pinning Lady C isn’t something anyone could have predicted given her age but we’ll have to wait and see where this goes.  Hina and Lady C continue to improve with each passing match. ***

Mina Shirakawa had the best match of her Stardom run against one of the best in the company.  Momo Watanabe got a decisive win in this match that she really needed.  Using her exceptional kicks she took the fight to Shirakawa and blitzed her in a similar manner to the manner in which Nanae Takahashi beat Momo Watanabe.  Shirakawa fighting through Watanabe’s onslaught helped her look good as she showed a lot of fight but in the end, Watanabe was just too good for Shirakawa and put her away. ***1/2

In a match that we’re likely to see many times in the future two women earmarked for success in Stardom faced off as Queen’s Quest and the Cosmic Angels faced off for a second match in a row.  Kamitani got the win with the Star Crusher to hand QQ their third straight win on this show.  The match itself was good given the relative inexperience of both women, especially in singles matches, but they definitely have a better match in them. ***1/4

This was a hectic match with a lot happening in its 25-minute runtime.  Some interesting points to note include Ruaka pinning Saya Iida to eliminate the Future Of Stardom champion, it seems those two aren’t finished with one another after their recent title match.  Hanan eliminated Ruaka with her armbar finisher, she is slowly establishing it as a killer move that can win her matches at any time.  Rina and Starlight Kid did some notably good work, Rina at just 14 is already so talented and kept up with Kid.

Oedo Tai cheated to get the win with Saki Kashima last eliminating Gokigen Death, meaning Death is now in Oedo Tai.  Oedo Tai’s cheating isn’t going away but at least they’re getting better at it now in important matches to the point that they can beat almost anybody.  This was a good match with a pretty meh finish as Death switching to Oedo Tai isn’t exciting, although I’m open to be proven wrong.  ***1/2

Post-Match: based on the report Stardom put out on this show Mayu Iwatani promised to win Death back at Ota Ward so it would seem they’re running this match back next month with Kid or Iwatani’s spot in STARS on the line to get Gokigen Death back.

Tam Nakano’s run of excellent matches continued as she and Natsupoi had a visceral and emotional battle over the Wonder Of Stardom Championship.  Nakano is better than anyone in Stardom at playing off the emotional investment in a match and that helped take this to another level.  Both women work well together which guaranteed this would be good but Tam Nakano’s current style of having aggressive and hard-hitting matches elevated this to a level I didn’t know Natsupoi had as Poi was giving as good as she got.  Nakano predictably retained but these two delivered a candidate for the match of the night. ****1/4

Former QQ stablemates turned enemies collided here as Utami Hayashishita continued her streak of really good title defenses.  She and Priestley unloaded the clip against each other as they threw absolutely everything in their arsenal at one another.  They even managed to overcome the usual Bea heat segment by doing some interesting work outside the ring.  Once this got to the finishing stretch both women delivered a world title caliber match, Utami Hayashishita especially was laying her stuff in with even her basic lariats looking like they were doing damage to Priestley while some of her suplexes and powerbombs looked like she was trying to throw Priestley through the ring.  In a huge moment, Utami Hayashishita kicked out of Bea Priestley’s Queen’s Landing finisher which is one of the most protected moves in all of Stardom.  This was a big win for Utami Hayashishita as she finally beat Bea Priestley. ***3/4

Post Match: Bea Priestley put over Utami Hayashishita and Momo Watanabe before revealing that this was her last match in Stardom, and Japan.  To say this was a shock was an understatement but it puts Priestley’s booking ever since her return to Stardom late last year in perspective as she has mostly been used to put over people Stardom are interested in pushing going forward.

Despite having to follow up two strong matches and a shocking departure these four women delivered a great main event that was nothing but action for its 28-minute runtime.  Matches like this can often go off the rails and lose me but these four managed to keep things interesting without ever going overboard and it was honestly a shock to me when I found out this match went 28 minutes.

What stood out to this was how hard all four women went, every strike had some added vigor to it, every powerbomb and tag team move looked like they were being done with just a little more force than usual.  All four women put their bodies through hell in an attempt to gain some bragging rights in their faction and to claim the tag team titles.  Giulia even pulled out a Nothern Lights Bomb

Syuri and Giulia reigning as tag team champions puts the entire division on notice as it’s hard to see who could beat them, Syuri and Giulia are two of the top names in Stardom and they work really well together which should make them almost unstoppable as tag champions.  It also gives Giulia something to do as they wait to have her take the world championship, presumably at the end of the year. ****1/4

Post Match: Based on the report Stardom released Syuri made it known that she wants to challenge for the World Of Stardom championship, Hayashishita told her to win the Cinderella tournament earn the shot

These Stardom PPVs got off to a rocky start early on but as they continue to build stars and improve their roster they’re some of the best Stardom shows in some time.  The final three matches on this show were all really good in their own ways and any one of the three could easily be your Match of the night and I couldn’t argue with you.  The undercard delivered big too with the opener overdelivering and the two QQ vs Angels singles matches being good in their own ways.  Stardom is going from strength to strength these days and I’m excited to see how they get to Ota Ward which seems set to have Utami Hayashishita vs Syuri for the world title as a marquee match.  If NJPW has become offputting for you with their recent booking then now may be the time to jump on the Stardom train as they are firing on all cylinders at the moment.