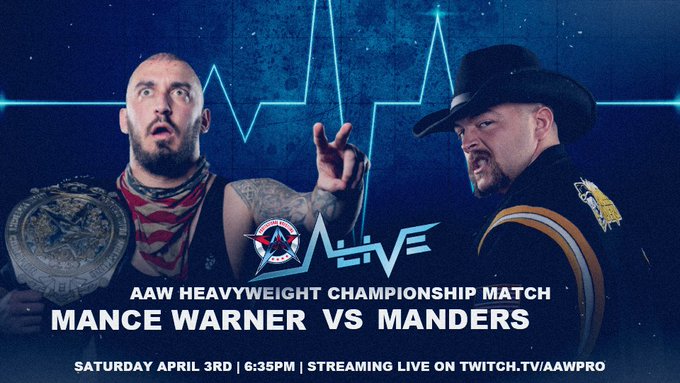 Skye Blue began working in AAW when the Alive series started back in October. I noted in that review that she was serviceable, offering nothing spectacular to the match but also not detracting from it in any way. Blue is still not excelling at any particular thing, but she’s gotten better since October. Her issue going forward is going to be figuring out a way to properly utilize her size. In this case, she was smaller than Hyan, clearly outmatched in terms of power and strength, but didn’t combat her opponent with speed and agility. I want Blue to either hit harder or move quicker. I struggled buying into some of her offense in this bout.

Hyan provided enough brute force to create an interesting clash of styles. Blue won with a Standing Shiranui in an inoffensive opener. **3/4

Show will be available on @HighspotsWN soon

Allysin Kay returned to AAW after the match and confronted Skye Blue. She then announced she was going after the AAW Women’s Title.

Brayden Lee has the body of Roderick Strong with the aerial ability of IWA-MS-era Matt Sydal. Needless to say, I’m becoming a big fan.

Lee was supposed to wrestle ACH, but the Texas standout missed his flight and thus Ace Perry, the trustee Indiana-based worker, took his spot. Perry is someone who has floated around for years, always working IWA-MS and somehow never progressing past that point. He’s the type of guy that I think would do incredibly well in the current NWA landscape. His character work is always on point, but on this night, his in-ring output was terrific as well.

This is the type of match that I feel has been absent from indie wrestling for a healthy amount of time. In front of a packed crowd, Lee and Perry would’ve won over the audience in a way that would force the promotion to bring them back.

They were ambitious, but calculated.

Ideally, these two would exist in a scene where they could work veteran hands and get better over time. Unfortunately, with this kind of output, these guys are near the top of the food chain in the current indie landscape. This was the best work I’ve ever seen from Perry and hopefully the first of many thrilling matches from Lee in AAW. Recommended. ***3/4

Show will be available on @HighspotsWN soon

Hakim Zane hosted a “public workout”, which involved him quickly submitting both Isiah Moore and Cole Karter. Zane refused to break the hold on Karter, leading to Myron Reed coming out and making the save. Zane continues to do great character work in AAW. This segment came across very well.

God, what a bunch of stuff. As you’d expect from these four men, they threw a bunch of stuff at the wall and most of it stuck. PACO, who is AAW’s homegrown legend, returned after a year-long absence from the ring. He shined brightest in this match and it continues to baffle me that he doesn’t pop up more places. He’s a mesmerizing underdog. He uses his size not only as a gimmick, but as a strength. Despite numerous spots where both Gringo Loco and Jake Lander were able to show off what they do best (insane lucha spots, jaw-dropping feats of strength), it was PACO who looked like the steady hand, guiding this match into becoming something worthwhile.

Loco, Lander, and King all played their parts well. I’ve noted in the past that I’m a big fan of what Jake Lander brings to the table as a Petey Williams/Scott Steiner hybrid. Loco nailed a few big, terrific spots, in particular a spot in which he leaped from the middle rope to the top rope while spinning in mid-air and then delivered a moonsault to his downed opponent, but he ultimately looked hollow in transition moments.

This was the exact type of car crash that it should’ve been. I don’t want to see these men grab holds, I want to see these men dump each other on their head. I think this match slightly overstayed its welcome. I kept on waiting for a big, emphatic three-count after a death-defying spot, but instead, the match continued until PACO hit his Cradle Shock-like finisher for the fin. Very fun, very dumb wrestling. ***1/4

Chuck Smooth cut a tremendous backstage promo, noting that he would be bringing a monster into AAW.

With this win, Mance Warner has now successfully defended the AAW Heavyweight Championship for a fifth time.

Much like the prior match, these two put on a display that was exactly what I was hoping for. It just so happened that this match was the antithesis of the four-way that preceded it.

Mance Warner and Manders beat the shit out of each other. That’s the easiest way to sum up this bout. They slugged it out, tossing chairs into skulls and fists into craniums willingly, gleefully, and excitedly until both men had trouble getting to their feet. I was stunned at the atmosphere these two were able to create in a limited capacity, fully-masked crowd. This came across like a big title match that deserved a packed auditorium full of rabid fans. I certainly wouldn’t complain if AAW circled back and did this match again at some point down the line.

I wasn’t in love with the plunder they brought to the table until Manders hit the Iowa Stampede onto two opened chairs for a ridiculously close nearfall. Warner milked every millisecond of that pin.

The champion fought back, blasted Manders with an array of moves, and then put him away with a DDT for the win. It was the perfect burst of violence to end a chaotic and heated affair. ***3/4

After the match, Fred Yehi choked out Manders in the entryway while two masked men attacked Mance Warner. This was a hot way to close the show.

AAW once again proved that with a little bit of effort and a little bit of care, there is still independent wrestling worth watching. The production and professionalism is a level up from the core group of prominent indies going today. The backstage segments, the booking, and the pacing of this show all add a layer that I feel too many indies are lacking in the current scene. AAW’s fourth installation of their Alive series was their best yet.