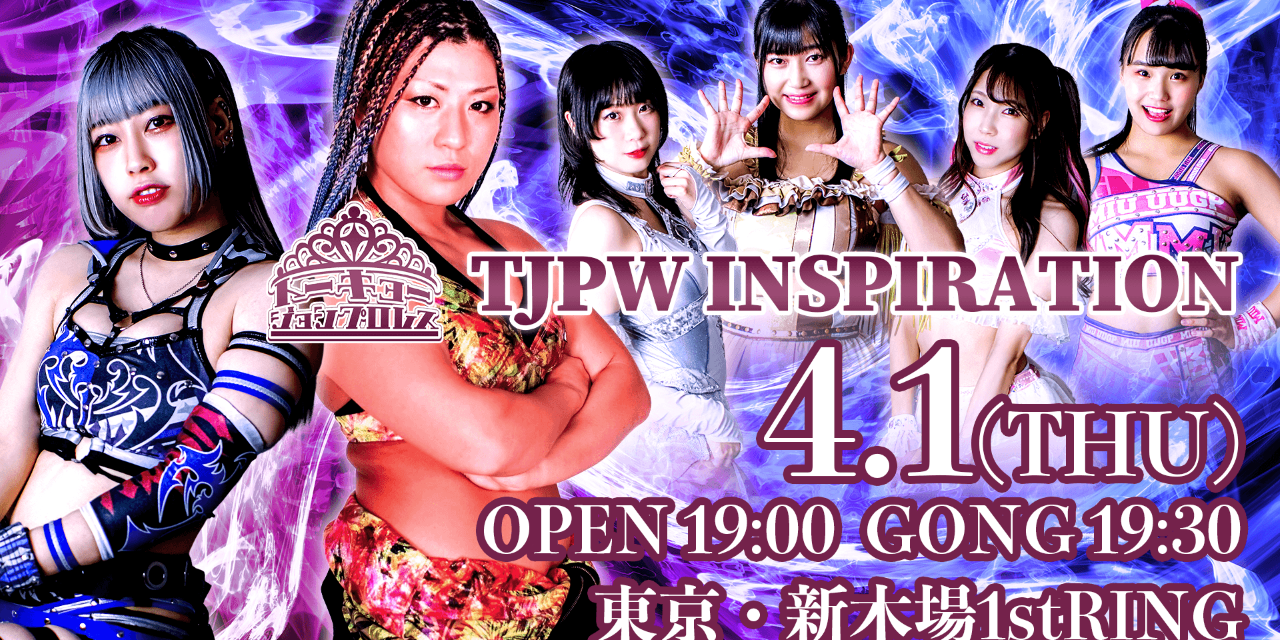 After a few months filled with hospice, hospitals, and family medical leave, April has arrived and with it, a hint of normalcy. Work has resumed, new responsibilities have become routine, help has been enlisted and the time has come to start taking care of my own (mental) health.

Part of that self-care routine is Tokyo Joshi Pro Wrestling, watching which has done more for my personal depression than any of the six medications I’ve tried. Luckily for me, I return as it seems TJPW is experimenting with a couple different ideas to expand their fan base, with a twice-weekly one-match show in English being announced, in addition to the Inspiration concept, which seems the perfect point to jump back into the promotion. Inspiration is a new type of show from Tokyo Joshi Pro that will run in between their regular shows. Inspiration shows will feature a limited number of wrestlers and matches with a corresponding reduction in ticket price. Think of it like a snack-sized portion of TJPW that hopefully exposes more people to the product while getting the workers more reps and allowing them to bring in talent/work matches that don’t exactly fit into the normal tour shows. The inaugural Inspiration features the Up Up Girls in various singles matches, including a Tokyo Josh Pro hardcore match with freelancer Rina Yamashita! Now that I’m inspired, let’s watch the first Inspiration.

Three singles matches and a J-Pop performance?!? These tickets were a steal! I’m actually interested if future Inspiration shows (one is announced for July 1) will include an Up Up Girls performance. This one was obvious since all three members were booked in matches, but with the limited wrestler concept of these shows, do they bring a member along just for the performance? While we will find out in July at least, the thought of a TJPW show not starting with a J-Pop performance just seems wrong. As for this show, it definitely wasn’t their best routine, but as each of the girls had a featured singles match upcoming I can forgive them for being slightly distracted. The train of the day is the Red Arrow if you were wondering. If you just can’t be bothered with this, the ring introductions for the first match start at 21:16 on the VOD. Music hater.

The first match of the night was also my most anticipated. Miu Watanabe is fresh off her unsuccessful challenge for the Princess of Princess title, and Mizuki is the highlight of the promotion to me, just a blur of sugar-powered charismatic energy. Unfortunately, this was not the 4 plus star match these two will someday wrestle. It wasn’t that this match was bad, it was just a match, and with the talent involved they have to consider this a disappointment. At times they did not seem on the same page, with Mizuki at one point waiting way too long for Watanabe to get up for a strike exchange. In a fitting symbol for this match, Mizuki broke out her spinning cross body press but only got halfway there on the spin. These two are too good to have an actual bad match, but something was off with this one. Mizuki won with the top rope diving foot stomp. **1/2

When this match began with Rika Tatsumi searching for a hiding Raku, I admit that I was about to check out. But then Raku appeared behind Tatsumi and attacked her, knocking her down so she could tape a teddy bear pillow to Tatsumi’s rear. Well played. I consider the missile hips ridiculous so combating it in a ridiculous way makes sense to me. After Raku no sold several pillow-protected missile hip attacks Tatsumi was able to free her rear from its pillowy confines.  I am slightly disappointed that Tatsumi didn’t have a ludicrous counter to the Goodnight Express. This match had a hard ceiling for me because even though both of these women can work, especially Tatsumi, their offensive attacks normally look like they would give a five year old the giggle fits. At one point, Raku hits a decent facebuster on a hung-up in the ropes Tatsumi, only to follow up with a top rope chop to the head that made Pom Harajuku’s shin kicks look devastating. For her part, Tatsumi set Raku up in the tree of woe, with Raku’s skirt falling up to cover her face, leaving her blind to the upcoming offensive attack. But instead of a dropkick to the face or any number of other attacks The White Dragon could have unleashed, she instead went with the missile hips, launching her rear into Raku’s crotch in an offensive maneuver that sent at least one child watching into immediate puberty.

This was a fun match, and when going up against Raku I can tolerate Tatsumi’s missile hip attack a bit more. Raku is so cheerful she’s practically impossible to hate, but her destiny in TJPW is in the fun multi-woman tag matches that feature Pom’s shin kicks and Haruna Neko’s claw attacks. That’s where her head chop and Goodnight Express fit in, not in “serious” wrestling matches. Tatsumi should save the missile hips for those matches, and give it a rest in her title defenses. Of course Tatsumi picks up the win here with the top rope missile hips, and to contradict my entire point the missile hips she hit Raku with to end the match legitimately looked devastating. If only she would use it just as a finish instead of peppering it all through her matches. **3/4

So everything is legal in this match unless the referee deems it particularly life-threatening. Looking at the various weapons/items in the ring, including a wooden board hilariously decorated with a cross in glow sticks, this seems the least TJPW thing ever to happen in a TJPW ring. The first part of the match had me a bit worried, as after starting off with some basic grappling, Noa brought out the first weapon which was… a bunch of music CDs that she poured out over the ring. After rolling around on them for a bit, including a rolling cradle, Rina broke a few CD’s, hilariously popping the crowd with each snap. Rina’s momentum was used against her as Hikari sent her through the board in the corner, allowing Hikari to bring the ladder into the match, putting her head through it and spinning around wildly. I’m sure this made perfect sense to Hikari, but it was not effective, as once Rina dodged the initial spin, she was free to watch the ladder girl spin, choosing the perfect spot to hit the ladder with a chair, rudely interrupting Hikari’s impression of a top.

With Rina in control now things picked up a bit, with a body slam on the concrete floor and the introduction of a table. They had a strike exchange on the apron, with each of them working for position. This may have been the first time I have ever watched a TJPW match thinking “please don’t die,” as I wondered what they were going to do with the table set up on the floor. A slow motion headbutt from Rina briefly took me out of the match here. If you can’t work a good-looking headbutt, maybe don’t do a headbutt? This thought quickly was replaced with “PLEASE DON’T DIE” as Rina picked Hikari up and eyed the table from the apron, putting Hikari through the table with Fire Thunder! From this point on I was invested, though this crowd seemed in a shocked silence until Rina bodyslammed Hikari on the ladder, which seemed to wake them up a bit. Noa’s desperation, struggling to fight back against her bigger, stronger opponent after the Fire Thunder was inspiring, getting the fans completely involved. Her kickouts at the end, especially after Rina’s pumping bomber, were stubborn refusals to admit defeat. Rina hit Splash Mountain onto a pile of chairs and it was over. Welcome to hardcore matches, Hikari Noa. ****

This was a one-match show, but that match definitely made the card worthwhile. I am still uncertain on the Inspiration concept, as I think it has some pacing issues that affect the matches. While a 6 woman tag to start things off would probably defeat the “less time, less expensive, less workers” idea, a two vs two tag match would probably kick the show off a bit better and allow a more natural build to the main event. That being said, anything that brings more eyes to the product is a good thing, and if you skip the J-Pop performance you can easily watch this in under an hour.