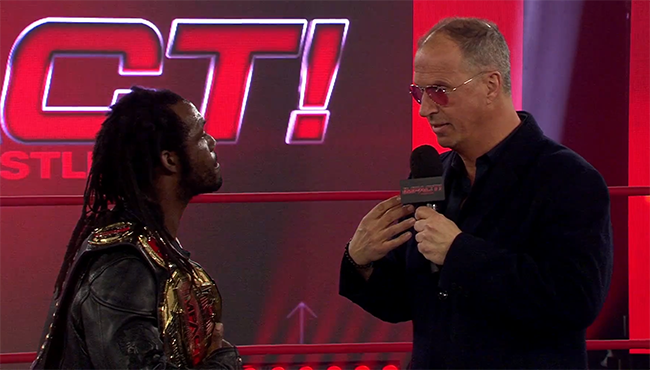 If you were asked to comprise the perfect pro wrestling promo, what would it look like? Which elements, would you say, are necessary to deliver something that defines a wrestler or gets you in the room for a big match? For me, there are three key things – the right cadence, the interweaving of history throughout the promo, and a hook for what comes next.

Impact Wrestling might not currently be viewed as a promotion with a surfeit of great talkers. That’s not to say that they don’t have any, more just that there aren’t many who’d immediately leap out at you. On Dynamite, MJF continued to set himself apart in the promo cutting department but one night prior, on Impact, Don Callis also provided a great lesson on the mic in how to deliver something genuinely powerful.

In many ways, Kenny Omega’s match with Rich Swann at Rebellion sells itself. It’s a historic title vs title match between two major American promotions working together. It has so much unique intrigue to it that even without any real further build, Impact would have more eyeballs than normal on the Rebellion PPV. Yet, there should always be further built in situations like this. The more stakes and underlying narratives a big match like this has, the greater the anticipation for the match and, as is sometimes the case, the better the in-ring end result. This week Callis and Rich Swann set the stool out for the match and then some.

The video on Impact’s YouTube channel doesn’t cover the whole bit, which I’d recommend you watch, but it still contains all the vital elements that made this so special.

Rich hits the ring, cutting the typical babyface celebration speech after his big win at Sacrifice. He jokes about struggling to hold up the two belts at the same time, he praises Moose as a competitor and then looks ahead to what comes next. He addresses his loss to Kenny Omega and never once looked like a dork. Simple, yet effective. Then Callis’ music hit. Callis has been integral to Omega’s recent character development and he’s even more important in this feud, with Impact not having the sort of access to Omega that they normally would for a title challenger. He has to be the mouthpiece and the one who sets the direction of the program.

Initially, you’re struck by the genuine tone in Don’s voice when he talks to Rich about their history together in Impact; the ups and downs they’ve had together. He ‘breaks kayfabe’ and pulls back the curtain, adding the sort of realism that leaves you hanging off every word.

“When you broke your leg, I fought to make sure you and your family still got that cheque every two weeks. Was I not the one that called you every week to see how you were doing?

“You were my guy. I pushed to have you in that main event at Bound for Glory when everyone said ‘No, he’s not wrestled in 10 months’.”

Even as the subject matter changes, the cadence from Callis stays mainly the same. It is low, reassuring almost. He maintains eye contact with Swann, who more than played his part, throughout. For while it is the words of Callis that drove this segment, Swann’s facial expressions complete it. There is no smoldering aggression, there is no retaliation or aggravation. He just looks at Don, taking in every word.

Don explains how Kenny Omega became his greater fascination, replacing Rich as the apple of his eye. In many ways, he casts himself as a father figure who clearly favors the younger child, going to watch all of their sports games and musical recitals while only showing a passing interest in the activities of the older child, which had previously seemed equally as important. You were almost waiting for him to say ‘You know what Rich, why can’t you be more like Kenny?’ We don’t get that but we do get references to Kenny as family, and to the Golden Sheik.

“I remember one time, I bought my first card with my first wrestling pay check. Then I saw someone else with a nicer car and I felt an emptiness inside of me. The Golden Sheik said to me, there’ll always be something bigger, better. Something you’ll desire more. I don’t mean to be shallow but for me that was Kenny Omega. I moved on from you”.

Explaining the history of his relationships with the two men is vitally important but the real beauty of this is the closing stretch when the focus switches to their match, and the inevitable conclusion in Don’s mind.

“You must have had that One-Winged Angel in the back of your mind after Sacrifice. Did your wife tell your friends ‘don’t mention that, let’s focus on this’? Did you wake up in the middle of the night thinking about the One-Winged Angel at Hard to Kill?”

“You made history at Sacrifice, congratulations. You also get to make history at Rebellion. Rich, my friend, the problem for you is, in this case, I’ve already written that history.”

The focus is as much on Kenny, a “once in a millennium talent” as it is on the One-Winged Angel and that is how it should be in professional wrestling. Well-built moves for top guys should be seen as much of a threat as they are as an overall competitor. Finishing moves tell stories in matches and there’s no reason why they shouldn’t outside of them (in a sensible way).

One of the effects of Don keeping his pitch and cadence at a similar level throughout is that sudden changes elicit more of a reaction. Him screaming ‘One-Winged Angel’ three times in Rich’s face, with his hand on Rich’s shoulder and spittle flying out of his mouth is incredibly visceral.. Don’s whole look, with the smirk on his face is that of the puppet master, delighted that he’s got all of his pieces in order.

Rich’s face is that of a man who’d taken every word to heart and it adds an important subtext to his match with Kenny at Rebellion. Not only is it about the history, the belts, standing up for Impact Wrestling, it’s also about now proving a point to someone he saw as a metaphorical father figure. He’s just as good and exciting as Don’s new shiny toy.

At the start, I asked what would make a perfect promo? For me, what Don Callis put together on Tuesday pretty much ticks all the necessary boxes. 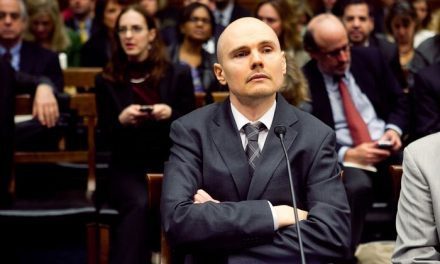