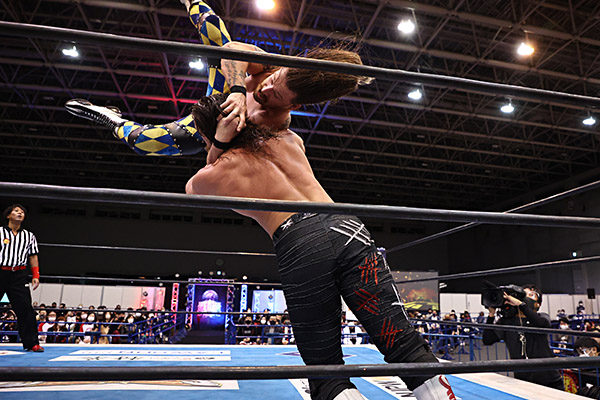 Today’s show has two exciting NJ Cup matches. Will David Finlay pull up an upset over Jay White? Will SANADA beat Ospreay much to the chagrin of a lot of NJPW Western fans? Will Ospreay’s nose hold up? After suffering EVIL and watching another great Shingo match at the last show, we finally have two Cup matches we could sink our teeth into.

Keep reading to see who passes to the semifinals.

I would advise you to just watch the Shingo/KENTA match from last Tuesday if you have not watched it. If not, you can go straight to the NJ Cup matches.

Who does not love a good upset? White and Finlay were dojo pals until they took different paths. In the past, every time both of these men wrestled, White kept beating Finlay one match after the other. Check out the Cagematch history:

This was not upset just because White had Finlay’s number, this was also because White is higher on the pecking order. Hell, one of these men main evented the Tokyo Dome this year on the longest match in that building. A normal wrestling fan might have thought: “I mean, it’s the quarter-final and Finlay has had a really good tournament. Maybe this is it for him. But again, this is the NJ Cup…” Without knowing the result (and if you are here, you probably read the header to see who defeated who) you would have been on the edge of your seat because maybe this was White’s time to beat his enemy one more time…or not.

Add to that tension that this was a great pro wrestling match. We got distraction bullshit and stalling in the first few minutes, but White and Gedo have made an art of making this not as distracting as with the other Bullet Club members. They should probably be the only ones that do it. Even without the distraction you can buy that White can beat anyone, he just wants the easiest way out and is an asshole. That is the difference between him and, you know, EVIL. What’s mainly wrong with the EVIL situation is that he does not look legit anymore, he’s like a baby that can’t do anything. White is legit.

The distractions make sense since you can assume that maybe White does not feel as confident against Finlay, who has been having a great tournament and even won the Impact Tag Team titles stateside. Juice took Gedo out and it fired up the match. Finlay had an amazing performance where he worked really hard and took a couple of nasty bumps. Anytime White throws his opponent outside, it looks like a killing move. Still, while the match kept going and I thought the result was obvious, Finlay started getting the better of White. There was a close two count when I thought “Fuckers had me thinking Finlay was winning”.

The finishing sequence was Finlay going for the Prima Nocta, suddenly being countered by White who tried to do the Bladerunner but was countered with a Prima Nocta and an Acid Drop. Finlay pulled the upset of the tournament and is going to the semifinals. Great storytelling and a great match. ****

This was probably the match that had Western fans scared of the result. Hope the vocal SANADA haters are happy. But you know what? Sure, SANADA sometimes is not smooth, shows no emotion or drive, and you can count me as one of his biggest critics, but I have to give it to him: this was a second amazing fiery performance from him this month (hell, this year). I wish we could see this SANADA that came to wrestle Ishii and Ospreay more often, but we probably won’t get that. And what else can you say about Ospreay other than he is still amazing and one of the best at this?

The match started fast, with quickness both from SANADA and Ospreay. Yeah, SANADA did his thing too. Things were even until Ospreay threw SANADA into the guardrail outside and took the advantage. A nice bit of offense of this match was SANADA screwing with Ospreay’s broken nose from last Sunday. He constantly targeted it, to the point that Ospreay got frustrated and started raking SANADA’s nose with his foot to break it too. You can also see in this match the only non-stupid Paradise Lock. Paradise Lock might be one of the stupidest moves, especially when it is done on an important match, but here SANADA tied him up in the lock, made sure his face was in front of the turnbuckle, so when he broke up the move with the dropkick, Ospreay went headfirst into the turnbuckle and the result looked nasty. Don’t worry, Ospreay’s nose came out fine in this match.

SANADA had Ospreay on the Skull End, then went for the moonsault for a two count. An O’Connor Roll almost made SANADA go to the next round, but Ospreay recovered with a Poison rana and a Oscutter for the two count. An elbow to the back of Sanada’s head and a Stormbreaker were enough to make Ospreay go to the next round and make some fans breathe easier. In the post match promo he made fun of David Finlay and discounted him as a threat. We’ll see where this goes. A great main event. ****1/4

Don’t miss the quarter-finals of this night. Both matches were exciting, with one having an upset and the other a fiery SANADA that made you think he could almost win. As has been the norm with these shows, the undercard is nothing to write home about. This Saturday’s show will have an interesting match with Ospreay vs Finlay and we’ll see if Shingo pulls up a miracle with EVIL. 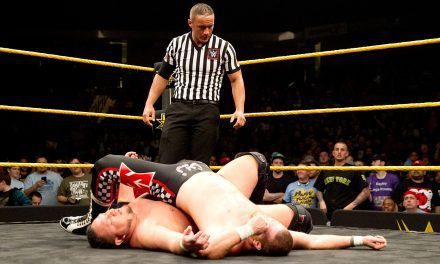