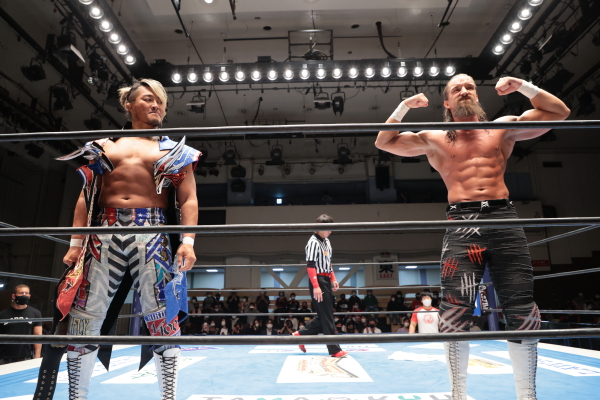 The New Japan Cup has been great, but also a testament that perception becomes reality.  I wrote in a previous review about Plato’s Cave.  The people trapped in the cave see shadows of the real world through the flickering fire, and become experts on the birds and the trees.  After escaping from the cave, however, they realize that things aren’t as they seem.  The reality is very different from what they think is true.

I used the allegory to explain my feelings about Goto, but I feel like there’s a general malaise towards New Japan that warrants the allegory expanding to the entire promotion.  I’m not being critical, I felt it myself. My review of the BULLET CLUB-laden Castle Attack Night One was scathing.

I do think it’s time for some to leave the cave, however.  The malaise infects and destroys anticipation, but before round two has finished, we have had two match of the year contenders.  Personally, I consider the ZSJ/Ospreay match one of the best matches ever and gave it five stars.

Maybe the UK lockdown is making me go crazy, but the difference in quality between the Cup and the Castle Attack tour is stunning.  Dismiss the Cup at your peril!

Notes From The Undercard

The undercard continues to be inessential fun, but I enjoyed a series of matches that pitted wrestlers against people who defeated them.  The opener (Minoru Suzuki, DOUKI and El Desperado def. KENTA, Jado and Taiji Ishimori **¾) was functional, and even Jado was able to chain wrestle without breaking a hip which is always an achievement at his age.  Suzuki yelled at KENTA, who reacted with the sweet, relaxed mockery that only an assured victory can bring.  The refreshing thing about New Japan is that you know the office has a note of that defeat and it will pay dividends later.

I loved the way Will Ospreay walked to the ring (Jeff Cobb, Great O-Khan and Will Ospreay def. TAICHI, Yoshinobu Kanemaru and Zack Sabre Jr **¾).  His face was a mess which belied his insistence that his victory over ZSJ was easy.  This was incredibly violent, with jokes, rakes and punches happening all over Korakuen Hall.  The star here was ZSJ, who told an excellent story.  The way he yelled into Ospreay’s ears as he stretched him showed that his defeat will not be forgotten for a long time. ZSJ walked away with a “we ain’t finished yet” and neither am I.  Kanemaru was great here, outsmarting the power of Cobb for long enough to look impressive but not long enough to avoid taking the fall.

Shingo and Goto went after each other for the last undercard match (SANADA, BUSHI and Shingo Takagi def Hirooki Goto, Ryusuke Taguchi and Yuji Nagata **½), and it was as good as you would imagine.  Shingo did a tour of his opponents, and showed why he is considered one of the greatest wrestlers in the word right now.  SANADA was present in the same way that fellow passengers on the bus are present.  They exist in the same universe, but if they disappeared off the face off the earth it wouldn’t matter.  This is actually impressive considering he scored the pin.

There’s no reason why wrestling can’t tell more stories like YOSHI-HASHI and David Finlay.  Wrestling needs stars to fill arenas, but I need to see people who struggle.  I need people, like me, who battle to tread water sometimes.  Tanahashi may stay up at night worrying about his hair, or whether he’ll ever be at the tippy-top of the card at Wrestle Kingdom again.  YOSHI-HASHI must wonder whether he can hold on to his dignity in a roster of people whizzing past him.

I started this match thinking of Finlay as a competent wrestler, and that’s exactly how he started this.  He wrestles with confidence, sliding around the ring in a competent and fluid way.  He has developed into the kind of wrestler that can hold his own in the second round of the New Japan Cup.  This might sound like I’m damning him with faint praise but I’m genuine.  He might not have been a wrestler I got excited to watch, but each outing was a constant surprise.

The bell rang, and my critical head began to whir.  I wondered who I was supposed to be cheering for, whether they were structuring the match appropriately or what the key spots were.

Finlay hit a dive to the outside and I stopped caring about that nonsense.  He sang the same note that YOSHI-HASHI sings and harmonized with him perfectly.  I was watching two men who, by rights, shouldn’t even be in the tournament.  But, they were.  Not only were they there, they both had the addictive taste of victory in the first round.  They scratched and clawed throughout the entire match, battling their own fatigue and ceiling as much as they battled each other.

The third act was filled with near falls that brimmed with wonderful vice versas of heartbreak and cheer.

When Finlay got the fall, it all fell into place.  He was the Young Lion that never went on excursion.  He was the second fiddle to Jay White during his tenure in black.  He’s been Juice’s mate for a while too.

But, when the referee counted three, he arrived.  He was me, he was you.  He was the working man who scratched and clawed to get a victory that might mean nothing to a Tanahashi but it meant everything to him.

I’ve been a staunch defender of Jay White.  I raved about his G1 Climax final against Kota Ibushi and wrote a love letter to him in the 2019 Yearbook.  I wrote about his potential.  I felt like I was on the ground of an exciting story about to go stellar.

When he had his ‘dark night of the soul’ after Wrestle Kingdom it felt like the next part of the story was here.  In many ways it is, but not quite in the way we expected.  He’s turned his schtick up to 10.5 when it needed 11.  Imagine he had come back from that promo twice the bastard he was before.  Instead, he’s slightly more naughty.

They opened with Tana letting White think he had convinced him to lie down and take the pin.  Unfortunately, the trick was so obvious it made White look silly for believing it.

Silly became an unfortunate theme of this, with pose-offs and flexing taking the place of engaging work for much of the first half.  It really exposed the dichotomy of Jay White.  Screaming at Red Shoes to “do your fucking job” after brual stomps was great but it’s always tainted by the stench of Gedo stalking the ring, ready to ruin a match at a moment’s notice.  The fact he didn’t ruin this match didn’t really matter because the expectation was still there. The Switchblade needs to switch gears, stripping back the character to the heel who beats you and behaves like a prick while doing it.

There was a moment in this when Jay White slowly rolled away from Tana on the top rope and it made me think of their Wrestle Kingdom 12 match.  While this was technically a better match, it didn’t feel like it had moved on too much.  The character of the Switchblade has been refined rather than developed, sprinkled with subtleties rather than amplifications.

This match had whispers of quality, but there were too many awkward moments.  Tanahashi seemed determined to avoid taking a Blade Runner, with smooth reversals missing the mark too many times.  Most egregiously, the Dragon Screw into Blade Runner finish slipped so much it seemed to happen in slow motion.  The Blade Runner had been hit so the fall had to happen, but it looked like trash.

This show overachieved.  Neither of the Cup matches were bad, and I loved the Finlay acceleration.  It might not be essential, but is worth a watch.  Going forward, we have Finlay taking on White in the quarter-finals.  Their story goes back to their Young Lion days, where White beat Finlay like a drum night after night.  I can’t wait to see what Finlay does with this story. 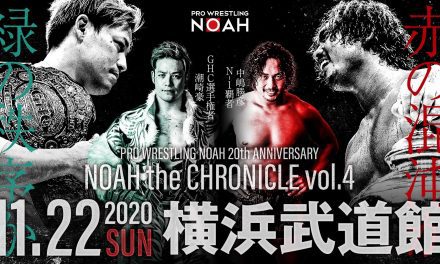 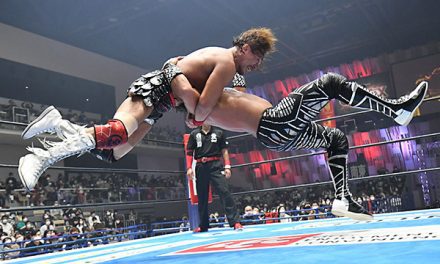