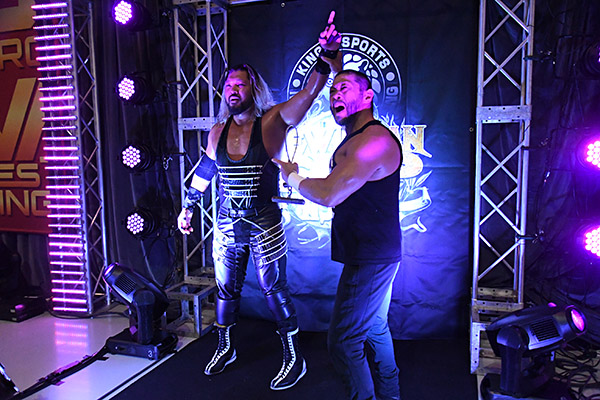 There is substantial reason for optimism in New Japan, in both a macro and micro sense, even if this isn’t exactly the show to make that case.

The first two months of New Japan’s 2021 was a torrent of ennui-inducing cards that were engulfed in stasis, stretched to molecular limits due to State of Emergency conditions. Bereft of the blithely refreshing Fantasticamania mini-tour, the results were dire: monotonous cards, almost entirely held in the same dehydrated venue, with the top programs uninspiring (a rematch of the G1 Climax Final and a rematch of the Wrestle Kingdom Night 1 main event).

We might have escaped that arduous phase. With the stakes of the New Japan Cup, the domino effects of consequence resultant from it that historically leads us all the way through Dominion, and a staggeringly ambitious Spring schedule, New Japan looks rejuvenated on a macro sense. Round 1 of the Cup was essentially clean the whole way through, smartly front-loaded with significant match-ups and back-loaded with Young Lion matches and match-ups between satisfyingly competent mid-carders.

The reason I have to address the micro optimism: this show was complete fucking NONSENSE. I am a proponent of both Yano and EVIL, and yet I simply can’t objectively defend the bollocks inculcated throughout this show. Yes, this was a frustrating show, but the rest of Round 2 looks promising. Remember the lesson from Castle Attack: 2021 New Japan delivers exactly what things appear to be on paper. And on paper, things appear encouraging moving forward.

QUIT YOUR BAND! MUSICAL NOTES FROM THE NEW JAPAN UNDERCARD

No one is on KENTA’s level

Great-O-Khan is an Axiological Philosopher

David Finlay Is Right on the Cusp

Naito vs. Okada with No Implications

The opening match was a lot of fun.

Loud as the brazen voice of the great-lunged Stentor

Who cries out with the blast of fifty other men.

Stentor is the incredibly loud Greek herald mentioned very briefly in the Illiad, from whom we derive all variations of the word stentorian. It defines a person with a powerful voice, sometimes in an impressive sense and sometimes in an obnoxious one. Stentor apparently died after some sort of formalized shouting match with Hermes.

Here, we find two stentorian wrestlers, possibly the two loudest on the roster. For half of this match, they did indeed engage in a prolonged shouting contest. Both survived. Hopefully, O-Khan’s credibility did as well.

The live crowd loved this, although the length at one point things killed the crowd, who got so silent you could hear someone zip up their jacket in the lobby. They did not have enough ideas for a 13-minute match.

O-Khan locked Yano in his head-and-arm choke way too deep into the match; one could argue that there was no place for that hold in any kind of match between these two, but most definitely not seven minutes into a Toru Yano match. There a name for the seven-minute mark of a Yano match: The Time To Wrap Things The Fuck Up.

But regardless of that, it was a hit live. For the viewing audience. Pronouncedly less so.

I acknowledge my bias towards Yano, only to emphasize that this is one time I have no defense or amelioration to offer. Unquestionably, there is a giddily immersive experience to be found somewhere in the match-up between these two. The contrast between O-Khan’s stoic utilitarianism and Yano’s effusively emotional skylarking is a naturally fecund comedic premise. But timing is the key element to anything, and this one went way too goddamn long. That could work if the length is part of the joke; this match, however, was just senselessly long.

Let’s examine recent matches where people lost their hair, and if the moment matched the action:

Giulia at the Budokan? Memorable. A moment befitting the stage and context and grandeur.

This fucking match? I sincerely hope that O-Khan was using extensions here, because this match was not worth his hair. **3/4

Here is where I acknowledge my comprehensive bias for EVIL and EVIL matches. I don’t sincerely like most of them, but I comprehend and admire the purpose and intent of them. I thoroughly enjoy this version of BULLET CLUB in multi-mans, where their unwavering amorality and delight in misfortune is tremendous. And yet, just as in the last match, I have to run contrary to my own bias: EVIL is no longer defensible.

Sure, the Okada match was fine, but this match accentuates EVIL’s cardinal, irredeemable transgression. It’s not the interference, it’s that he is TOO FUCKING BORING. He most effective personality right now is the flailing legs of Makoto Abe from under the announcer’s table.

I was so aghast at how awesome Jeff Cobb looked, that EVIL’s complete banality pushed me over the edge. I was so goddamn bored and unimpressed by EVIL in this match that I have sworn off that I refuse to allow EVIL any more of this review. I renounce the letters E, V, I, and L. Let’s continue.

Ok, I’ll be honest, I’m tired of that gimmick. Also as I watch through the match again to write this review, I’m surprised by how much better it is when I can just skip through it. The real issue is the scope and sequence of the match:

It really never got back on track after that point, because once it seemed like things were starting to smooth out into a decent home stretch, Yujiro got involved and the low blow spot ended the match. Too much spoiled tempo and deceleration.  ***1/4

One might have to consult their Primary Care Provider before watching this show. The show is exactly what you would expect on paper, although one might have been misled by the excellence o Round 1 to expect more than Cobb-EVIL delivered. If you are pruritic at the thought of these two New Japan Cup matches on paper, then you might have some sort of apoplectic crisis watching this. If you are inclined to favor Yano and EVIL’s antics, then this might be your card of the year. Either way, neither of these matches are worth sacrificing any part of your life to see. Literally, the benefits of just sitting in complete, empty silence outweigh whatever these matches could provide you. 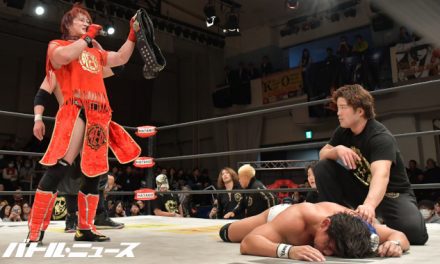